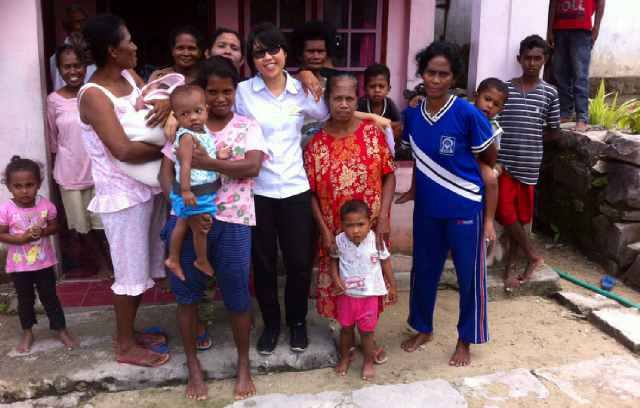 “Doc, we are very grateful and support the construction of this clinic. We hope to be able to seek treatment without difficulty. If we get sick, we have to cross to Kei Kecil Island. But how can we do that? Just to eat everyday is difficult….”

The hopes of Kei Besar residents have been high since they first heard about the plan to build a doctorSHARE clinic. And this hope grew on April 27, 2015. That day, our eyes blinked to welcome the morning, following the bodies that were already excited to prepare for the groundbreaking ceremony of the doctorSHARE clinic on Kei Besar Island, Southeast Maluku.

The event went smoothly. The rain did not dampen the enthusiasm of the 200 participants to come and witness the groundbreaking. The Chairman of the DPRD and the Regent of Southeast Maluku were present to give full support to the clinic construction plan.

Yes, the groundbreaking at the Balsomait land marks a milestone in doctorSHARE’s history. It is a form of gratitude for our struggle to find a landowner over the past few months.

What is so difficult about finding land that it requires a struggle of its own? In a big city like Jakarta, it is very easy for you to buy land. The owner is clear. Every inch of it is well measured. Certificates are available as proof of legal ownership.

But on inland islands like Kei Besar, most of the land is still forest or crop land that has never been certified. Local people call this customary land, which is inherited across generations. Land boundaries are also unclear. The unclear land boundaries often lead to conflict.

This is the kind of condition we have to face. After a long struggle, including witnessing conflicts between owners and cultivators, doctorSHARE finally owns the land. It is on this land that we will run our clinic program, nutritional care center, midwife and traditional birth attendant training building, and phytopharmaca or medicinal plant garden development.

What is the importance of these programs for the people of Kei Besar that doctorSHARE is fighting so hard to make them happen?

During my 10 months as a doctorSHARE volunteer and PTT doctor (Pegawai Tidak Tetap) in this region, I discovered a lot. I am increasingly convinced that there is no reason for the people of Kei Besar to remain poor and underdeveloped. The land is so fertile and can be planted with various types of vegetables such as eggplant, water gourd, mustard greens, tomatoes, and chili.

The problem is, vegetable plants need extra care such as fertilizing and watering every day. Residents are reluctant and prefer to just plant tubers such as cassava, yams and taro. They do not realize that a varied food intake is necessary for adequate nutrition.

Their lack of interest in being more creative in managing their land is clearly one of the causes of their poor nutritional status. I found many cases of malnutrition among children. From my investigation, I understand that they only eat to fill their stomachs.

What they eat is often just white rice without any side dishes. If money is tight, they often only eat a little rice with lots of water to fill them up quickly. This is an irony because the solution is already in their own hands.

What they need is awareness and this awareness can be obtained if someone starts moving to set a real example. This is where doctorSHARE comes in. We long to see the people of Kei Besar prosperous and healthy independently: from the people, by the people, and for the people.

We realize that health and prosperity are two sides of a coin that cannot be separated by the glue called education which must involve the people of Kei Besar themselves. In addition to food crops, medicinal plants can also actually be developed as a solution to overcome a number of diseases. Instead of just waiting to be treated by a doctor, malnutrition and disease can actually be prevented.

Of course, this work is not as easy as turning the palm of the arm, so we decided to be there. As we said in our opening remarks at the groundbreaking ceremony, the most important goal of this project is to empower the people of Kei Besar so that they are not only healthy but also smart and able to develop their own region well.