Building Indonesia from the Periphery 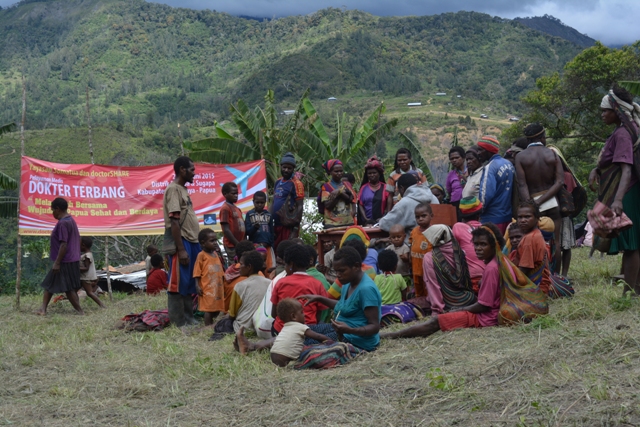 Massive disparities occur in all fields: infrastructure development, transportation, education, health services, and many more. The formula is that the farther a region is from the center, the more underdeveloped it is, hence the term “remote areas”.

But these “remote areas” are not geographically small areas. Take Papua, Maluku, and East Nusa Tenggara. The Human Development Index (HDI) can quantify for example the availability of transportation infrastructure, education, life expectancy, medical services and others that are still much lower than the national average HDI.

Let us focus on the medical field. It turns out that the maternal mortality rate, under-five mortality rate, and malnutrition rate in children are much higher in Eastern Indonesia than the average national development achievements, even up to four times (source: Strategic Plan of the Ministry of Health 2014 – 2019).

The huge disparity between regions/provinces raises the question of whether Indonesia is a unitary state or a union of states where there is “one country” (read: province) that is very rich and developed. On the other hand, there are “other countries” (read: other provinces) that are poor and underdeveloped that politically merge into a union called the Republic of Indonesia? Just look at how Cekslovakia and Libya – Egypt which incidentally has already dissolved.

The answer is unequivocal: NO! Indonesia is a unitary state. The slogan NKRI is a fixed price that we must realize, fight for, and maintain until whenever.

For almost six years, doctorSHARE (Yayasan Dokter Peduli) has regularly visited areas with minimal medical services and offered health care assistance to those in need. Tens of thousands of treatments, thousands of surgeries, and hundreds of malnourished children have been treated. We also often face the challenges of unpredictable bad weather.

There is little to no infrastructure, such as in the Central Highlands of Papua. This is the daily reality we face.

However, for the sake of equitable development of the whole Indonesian people, and the belief that God does not change the fate of a nation if that nation does not change its own fate (Bung Karno), we continue to provide medical services in areas that are difficult to reach.

Guided by our experiences and through creative innovations, we create new types of services that are appropriate. For example, in areas with poor road infrastructure, we provide mobile clinics in the form of motorbikes that carry medical personnel and medicines.

We visit coastal areas and small islands with Floating Hospitals. Inland areas in the Central Mountains in Papua are visited by pioneering aircraft, followed by walking through the forest and up and down the mountains carrying the necessary equipment. Medical services are also carried out under tents.

Our determination is to realize the motto “do TODAY what can be done TOMORROW.” Sickness cannot wait until all the infrastructure is completed.

Maybe one day there will be smooth highways and railway tunnels that cut through the wilderness and penetrate the bowels of the mountains in Papua like in the Alps and Norway in Europe. But we still invite colleagues to start today to build Indonesia from the periphery. Don’t wait for tomorrow. (***)