He Who Is Called Alrido 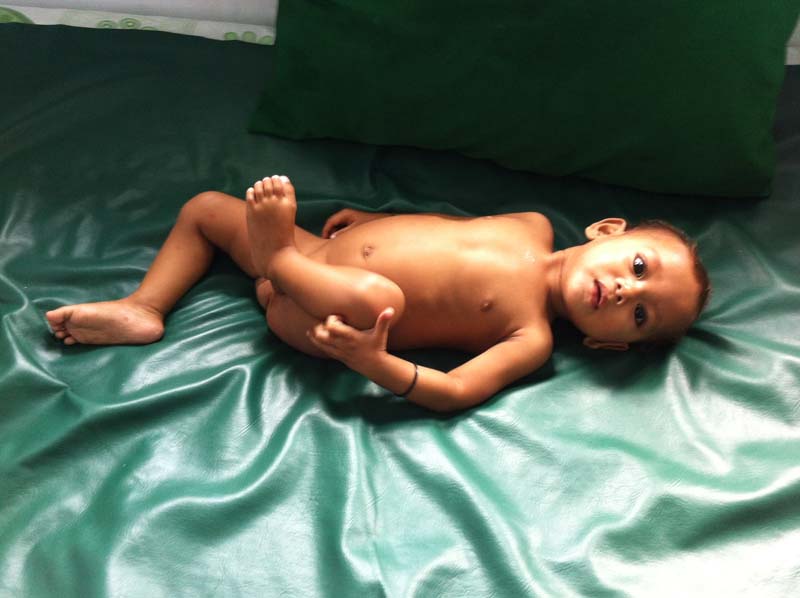 May 6, 2015 went like any other day. I woke up early, went to the market, and then immediately prepared to go to the puskesmas. The health center was open. One by one, I began to examine the patients. Suddenly my mind jumped to a tiny, sad face with a limp body carried by his mother. The 10-month-old boy was named Alrido Reyaan.

My first encounter with Alrido happened a week earlier. At that time, Alrido was brought by his mother to the health center where I was assigned because he had been running a fever and coughing for several days.

They turned out to be from a distant village and not in the working area of my puskesmas. But the difficulty of road access to the health center encouraged Alrido’s mother to take a small speed boat to bring her son for treatment to my health center.

As a doctorSHARE volunteer, I was also in charge of the doctorSHARE Nutrition Care Center which was housed in the building of the Watsin Health Center, Kei Besar.

Alrido caught my attention because his body was so thin. At that time, I asked his mother to take off Alrido’s shirt. I was not surprised.

As expected, Alrido’s weight was indeed below average. Alrido’s backbone was clearly visible, only covered by thin skin. The muscles of his thighs were also thinning, making them look wrinkled. I motivated Alrido to be admitted to a nutritional care center. But his mother refused.

A week passed, and I suddenly remembered Alrido. I intended to find Alrido and take care of him at the doctorSHARE Nutrition Center. Coincidentally, that day, the brother in charge of my village would hold a service for the people in the village where Alrido lived.

Unfortunately, the weather was not good. Road access became very difficult to reach. Besides, I wanted to pick up Alrido and his mother. We ended up taking a small speed boat. At first, our journey was fine. The sea was very friendly. There was no wind so there were automatically no waves.

An hour later, we arrived at Mun Ohoi Ir village, where Alrido lives. I asked the locals and met Alrido again. His condition was not much different from a week earlier. Alrido was still limp and coughing in his mother’s arms.

After a brief conversation, Alrido’s mother finally agreed to have Alrido admitted to doctorSHARE’s Nutrition Care Center. It was getting dark but we had no choice. That night we had to return to Watsin village so that Alrido could be treated there.

At exactly 7pm, we departed from Mun Ohoi Ir Village. The speed boat driver told us that there was very little fuel left so we had to walk slowly to get to the nearest village and buy fuel.

Thirty minutes later we finally reached Dangarat Village. Fortunately, there was still someone selling gasoline in the village. It was getting late and the tide was receding so we had to head out to sea, away from land so that the boat wouldn’t run aground.

As we traveled further, our journey took longer. I was worried because when I looked up at the sky, the stars were already hidden behind the clouds. Our surroundings looked pitch black. We had to rely on the glow of our flashlights, which were also fading.

This was a bad sign because it might rain. I could only pray that God would always protect and accompany us. We continued our journey. Sure enough, my worries came to pass. It was raining very hard with strong winds.

The speed boat we were traveling on was open with no top cover. Fortunately, I had my raincoat with me at the time. I immediately put the raincoat on Alrido who was in his mother’s arms. Our wet clothes and the strong wind made us tremble with cold.

I asked Alrido’s mother to hold her son tightly to keep him from freezing. Meanwhile, a friend of mine was constantly dumping the water that had pooled in the hull of the speed boat.

Forty minutes passed and we finally made it to our destination village. But because the tide had receded, the boat could not be docked. Finally, we walked down to the mainland. The rain and wind were still faithfully accompanying our journey.

Once on land, we had to walk uphill to the nutritional care center. Alrido could be heard coughing continuously. Our bodies were already tired from the long journey, so we couldn’t walk fast enough.

Not caring about our increasingly heavy legs, we kept walking and finally arrived at the center. It was a long journey full of struggles and life challenges. This trip was an unforgettable experience.

During his treatment at the orphanage, Alrido showed signs of improvement. His cough recovered and his appetite improved. His weight also increased. Unfortunately, after only a month of treatment, his mother asked him to return home even though Alrido’s weight was not yet at an ideal level.

Apparently, Alrido was the youngest of eleven children, living without a father. The mother was forced to ask for his return because the other ten children were neglected in the village. She had to go to the fields to do the gardening. Otherwise, there would be no food for her children. This is the obstacle that we and the parents experienced in the field.

We could not force Alrido’s parents to continue staying at the nutritional care center. We had to change our strategy.

Now, Alrido is still under our supervision, even though he cannot be treated at the center. What we do is “pick up the ball”. We visit Alrido’s house regularly to monitor his progress. His condition is improving, although he is still malnourished.

What is clear is that we will not give up. Storms, rain, wind, sea waves, muddy and rocky roads will not stop us from restoring Alrido’s health. We believe that as long as the spirit of struggle does not wane, there will definitely be a bright future for malnourished toddlers in Kei Besar. (***)