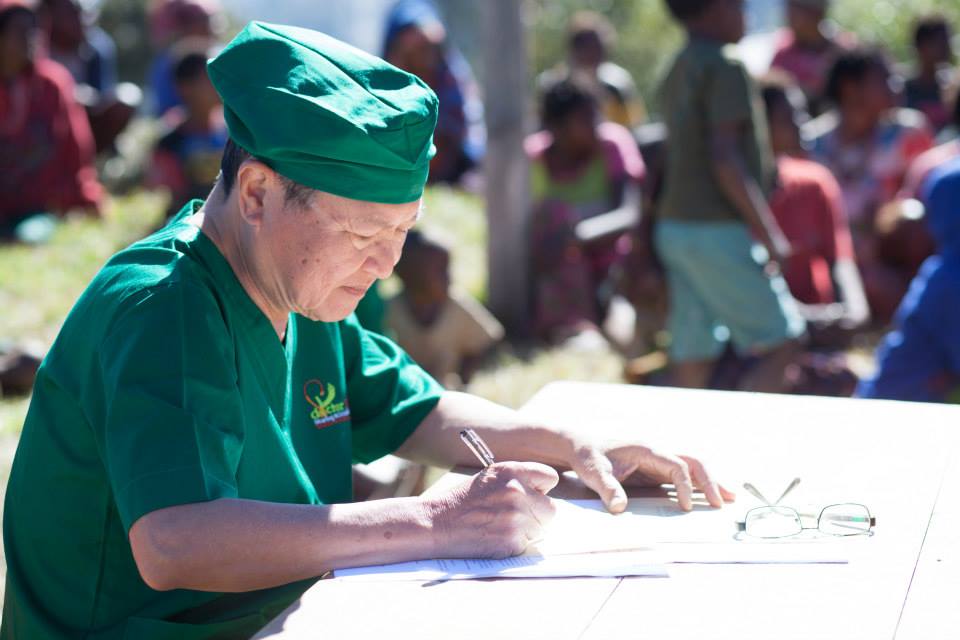 Throughout 2015, doctorSHARE’s activities increased sharply both quantitatively and qualitatively. Just before the turn of the year 2014 to 2015, doctorSHARE volunteers gave up their vacation days with their families to provide medical services for flood victims in South Bandung.

Still in the beginning of 2015, Dr. Angelina Vanessa and other volunteers managed to collect undernourished and malnourished toddlers from remote areas around Kei Besar Island and treated them at doctorSHARE’s Nutritional Care Center (PRG) or Therapeutic Feeding Center (TFC).

This success needs to be appreciated because at the beginning of the year, Kei and its surroundings experienced wave season. The courage to sail to visit difficult areas shows the dedication of team members who know what they are doing it for.

The toddlers were not only suffering from malnutrition but were also susceptible to other co-morbidities that required intensive treatment. Some of them were saved.

This incident should be noted. Starting from this event, the Maluku Provincial Government and the Ministry of Health realized that in remote places in the Maluku Islands, there are still children with nutritional disorders that have not been alleviated.

The Maluku Provincial Government offered to collaborate with doctorSHARE to serve the entire Province with an RSA (Floating Hospital) that is not only limited to Southeast Maluku. We welcomed this offer and an MoU was signed and witnessed by the Minister of Health, Mrs. Nila F. Moeloek.

We also agree with the Minister of Health that the government, private sector and NGOs need to work together to develop our Indonesia. Who can solve a problem, please do so for the benefit of the wider community,. There is no need to discriminate.

Still at the beginning of the year, doctorSHARE successfully purchased a two-hectare plot of land in Rahareng Village, Kei Besar. Negotiations with various parties had begun around mid-2014. Contrary to the skepticism of many Kei people who argued that we would not be able to purchase the land, reality said otherwise.

With skillful negotiation, gentleness and patience, we finally managed to buy the land. We would like to thank the Southeast Maluku Regency Government for all the real assistance and assistance given to us until we can obtain and build this land.

The groundbreaking of the clinic was done by the Regent of Southeast Maluku, Mr. Ir. Anderias Rentanubun in April 2015. Construction of the clinic building was completed in November 2015. Furthermore, rooms are being built for the Nutrition Center, training of local midwives, employee dormitory and phytopharmaca garden. All are being done in stages.

The services performed by doctorSHARE are increasing, both in number and type. This has implications for the increasing need for volunteers. Volunteers who work both in the office and the field come and go. Some dedicate themselves and their time in the long term, while others are present at certain times and events.

DoctorSHARE’s services also received appreciation from various parties in various types ranging from verbal thanks and hopes for the team to come back as well as in written form such as testimonies that we published through social media.

In addition to the service activities in the field, we also made organizational – administrative improvements so that doctorSHARE can truly appear as a modern organization in accordance with the times.

The last three years (six years since the establishment of doctorSHARE), when operational costs could no longer be borne individually especially when RSA I had started operating, third party donations began to flow in especially after the Kick Andy show in March 2014. Administration was gradually and consistently improved.

Staff were added, comparative studies were conducted, experts in various fields participated, both part-time and full-time. Our motto is that gaining trust is difficult but maintaining trust is more difficult.

Therefore, in the management of the organization, we strictly regulate the division of tasks, authority, responsibility and supervision so that the third party funds entrusted to us can really be used to the greatest extent for the benefit of the people who need it.

We collaborate with several parties so that the professionalism of doctorSHARE’s performance, especially the transparency and accountability of the use of funds collected can truly be accounted for to the public.

For 2016, doctorSHARE has created a reference program on what RSA III will do. RSA III will be completely remodeled to serve the community in Maluku Province.

After medical and non-medical equipment arrives in Kei Besar, the clinic and Therapeutic Feeding Center in Rahareng will be functional. Meanwhile, other physical developments will continue according to available financial conditions.

RSA I, RSA II and Flying Doctors have developed activity plans that are ready to be implemented this year. Although the 2016 reference program is already in place, the services we provide can change at any time according to our needs and capabilities.

doctorSHARE will stay true to its vision of providing assistance to those in need, especially in the medical field until Healthy Indonesia is achieved.

Happy New Year 2016. God Almighty is always with us.