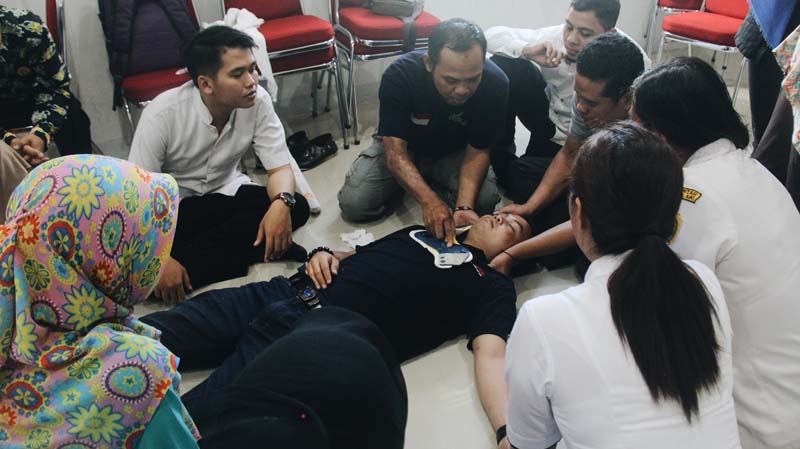 Emergencies can happen to anyone. Its arrival is truly unexpected. Therefore, everyone needs to have the ability to cope with them. Accidents and natural disasters are two of the many emergencies that are often encountered in everyday life. Panic often plagues people who see, experience and deal directly with emergencies. Panic actually makes the emergency worse.

An example of an emergency that is often encountered is a traffic accident. Crowds of people are a common sight when this happens. Not everyone in the crowd is able to handle it, in fact, it even makes the situation worse. Many ordinary people leave these conditions to medical personnel. Accident victims are usually taken to the nearest hospital or clinic for further treatment.

“On a daily basis working in the ICU room, we often find patients in distress so we must know how to handle them,” said Aprianto.

Basic life support is a series of initial efforts to restore respiratory and / or circulatory function in someone who has stopped breathing and / or cardiac arrest.

The training held on Wednesday (22/6) was the first training organized by doctorSHARE in its medical service mission to various regions in Indonesia. The enthusiasm of the participants could be seen in the training at the Amadeus Hotel Hall, Nanga Pinoh. Some participants took notes on every material presented by the speaker. Some participants were also seen getting to know each other.

The training method used was a workshop and was divided into two sessions. The first session started at 09.00 until 12.00 WIB. In the first session, participants were provided with theories of handling life support in an emergency. With the help of slide presentations, the two presenters took turns sharing knowledge with the participants. Occasionally, participants asked questions.

The second session continued from 13.00 to 16.00 WIB. In the second session, participants were divided into two groups to practice directly the theories that had been explained in the first session. The practice was assisted by props such as phantom dolls for simulation, Long Spine Board (LSB), scoop stretcher, air way set, splints, and others. Each participant took turns simulating the emergency that occurred, along with the steps to handle it.

One of the administrators of PPNI Melawi Regency, Menot Ardian, said that the number of participants reached 55 people, including the committee. The participants were nurses from various hospitals and health centers in Melawi Regency. In addition to nurses, other professions such as analysts and pharmacists also attended. According to Menot, the training materials are very useful for medical personnel.

“The materials presented are very useful, especially when we work in the health sector where the main help for patients is basic life support. In Melawi Regency, training like this is very rarely held. So this is very helpful to update the knowledge of the participants,” explained Menot.

Menot hopes that the training participants, especially nurses, can apply the knowledge in their respective workplaces. Nurses who have participated in the training are also expected to share their knowledge of basic life support with the general public because the community encounters emergencies earlier than medical personnel in hospitals.

“Emergencies are never predictable. So if we share information, we can also help others, then help the medical staff at the hospital. When we are at the hospital, we hope that the patient’s condition is not too severe,” Menot concluded. (***)