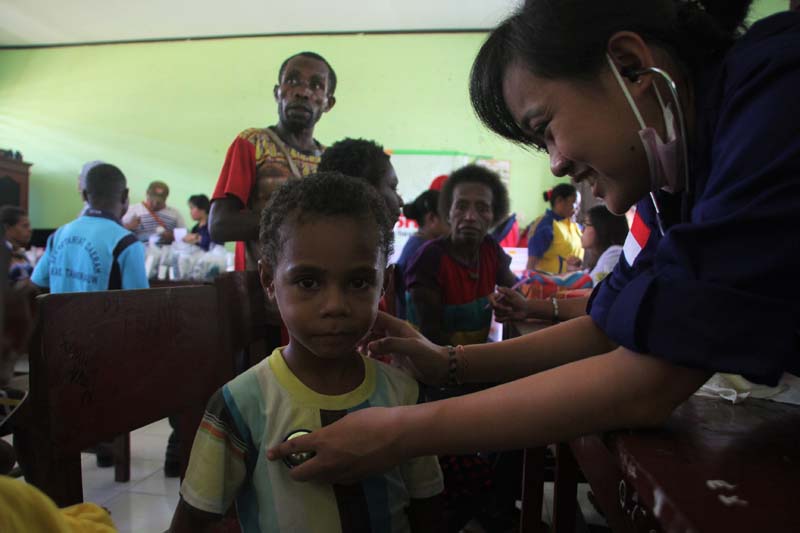 The doctorSHARE Medical Service with RSA dr. Lie Dharmawan was held for the third time in Sausapor District, Tambrauw Regency on June 18-26, 2016. The team of 16 volunteers was divided into two groups. The first group arrived in Sausapor on June 18, 2016 to prepare pre-operative examination (screening) on patients who will undergo surgery.

The pre-operative examination of patients took place on June 19, 2016 at the Sausapor Inpatient Health Center.

Major and minor surgeries took place from June 20 to 23, 2016 at RSA Dr. Lie Dharmawan, which was docked at Sausapor Pier. After undergoing major surgery, the patients were transferred to the Sausapor Inpatient Health Center using the Puskesmas ambulance. These patients were then observed overnight. Over four days, the team treated 34 minor surgery patients and 21 major surgery patients.

The series of surgeries lasted for four days. Furthermore, the team organized health counseling and general medical treatment activities for the general public in Sausapor District and its surroundings.

Health counseling and general medical treatment were located at Inpres Elementary School No. 9 Sausapor. The team was assisted by officers from the Sausapor Health Center. The activity began with remarks from Mrs. Kurina Murino, Head of the Sausapor Health Center. Counseling activities took place starting at 08.30 WIT, followed by registration and health examination activities.

Training activities and ultrasound (ultrasonography) examination also took place on June 21 – 23, 2016 at the Sausapor Inpatient Health Center. A total of 7 midwives and nurses as well as 2 doctors of the Sausapor Health Center also paid attention and immediately practiced how to do an ultrasound accompanied by an obgyn specialist. There were 75 patients who underwent ultrasound examination during the activity.

Both doctorSHARE and Tambrauw Regional Government hope that the cooperation that has been well established so far can continue to bring sustainable benefits to the people of Tambrauw Regency, especially in terms of medical services and empowerment of local health workers. (***)