Elisabeth: “They Said That I Had a Big Tummy” 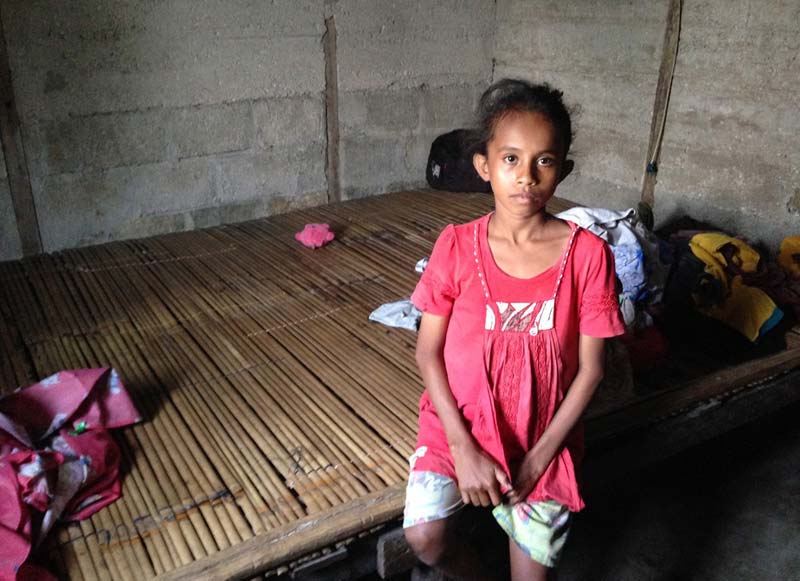 Elisabeth Resbal (age 13) answered softly when she revealed her reason for not going to school anymore: “When we played together, they said that I had a big tummy. It was embarrassing for me to have such a big tummy.” Not being able to take the relentless teasing from her schoolmates anymore, Elisabeth eventually gave up. She’d rather stay at home with her mother and siblings than to continue her studies at school.

Just like Eltina, Elisabeth was born on Kei Island, Southeast Moluccas. Elisabeth’s tummy started bloating when she was 13 years old. It all started with a fever and to everyone’s surprise, her tummy didn’t stop bloating but continued to become bigger and bigger.

Elisabeth’s mother suspected her daughter to suffer from a worm infestation. She started administering vermicides continuously but nothing happened. Elisabeth’s body was not able to recover and she became the victim of the continuous bullying from her schoolmates which eventually convinced her to stop studying.

After taking this decision, Elisabeth just played at home while taking care of her sisters. “Playing cooking games, jumping around …,” she told softly. When being asked if she became a good chef yet, Elisabeth shook her head while smiling shy.

As the third among eight siblings, Elisabeth has to look after her younger brothers and sisters. Her youngest sibling currently tries to learn how to walk and always wants to be assisted by Elisabeth. Their parents cannot stay at home all day because they need to earn money in order to support the family. They are working on a farm on the slope of a mountain nearby. For her young age, Elisabeth has been given a huge responsibility for her little brothers and sisters.

“Every day, their father goes to the farm. I also need to go there early in the morning to clean, feed the farmer’s children, and search for firewood. In the evening, I need to fetch water from the well to prepare my kids’ bath, to cook, and to wash our clothes,” Elisabeth’s mother stated. She revealed that the crops harvested from the farm are just enough to feed the family and that there is almost nothing left to be sold.

When a team from doctorSHARE visited Elisabeth’s house, it was obvious that the family was living under very modest circumstances. Their beds were made from bamboo without any sleeping pad, not to mention a mattress. Also there was no bathroom available. Elisabeth’s family lived under these humble and modest conditions like hundreds of other families on Kei Island do.

Despite her disappointment caused by the bullying, Elisabeth was really keen to continue studying. Attempting to support her wish, her parents strived to find a treatment to cure Elisabeth’s disease. With great effort they took her to see a medical doctor in Tual. Unfortunately, the doctor couldn’t offer any help due to a lack of medical equipment to diagnose her disease. The doctor advised the family to send Elisabeth to Makassar, but this appeared to be impossible to accomplish since it’s more than 1000 km away and the travel cost exceeded the financial possibilities of the family by far.

A new hope was raised for Elisabeth and her family when a team from doctorSHARE started providing free medical service on Kei Island in August 2015. After the Sunday Service, Elisabeth’s parents were given this important information from the pastor. The day after, they hurried to take Elisabeth with a taxi bike to Elat Port, the location where the Floating Hospital (Indonesian: Rumah Sakit Apung, RSA) “Dr. Lie Dharmawan” anchored.

“That day, her father accompanied Elisabeth to get aboard the Floating Hospital in order to get her tummy checked and treated. I was not able to join them due to the heavy sea. I watched them from the port instead while carrying my baby, Elisabeth’s little sister” her mother recalls.

The examining doctor suspected Elisabeth to suffer from a tumor located in her stomach. It was almost impossible to treat this particular case without a referral to Makassar or another major city. The clock was ticking and it was about time to carry out surgery, given the fact that Elisabeth was still able to walk and breath. If her tummy continued to bloat, there would be a high risk for her to become unable to breathe with the tumor suppressing her lung.

Understanding these urgent circumstances, the team from doctorSHARE hurried to call for donors to support Elisabeth’s surgical and travel costs. It was decided to transfer her to Jakarta and it was a real blessing that the Women International Committee (“WIC”) was willing to donate enough to conduct this plan.

It was in March 2016 when Elisabeth and her mother took a 5-day trip on a ship from Tual to Jakarta. In the hope to be treated and recover from her suffering, Elisabeth, and also her mother, felt barely tired from the long trip. Right after her arrival in Jakarta, Elisabeth received her pre-surgical screening (including CT scan, lab check, etc.).

Elisabeth’s surgery went well. It took 3 hours with Dr. Lie Dharmawan, the founder of doctorSHARE, as the surgeon. “The diagnosis was lymph-hemangioma, located in the intra-retro peritoneal cavity,” Dr. Lie explained. Elisabeth’s future has now become as bright as a diamond. She can now carry a big smile on her face and continue her studies without any worries.