A Cloves Story from Doi Island 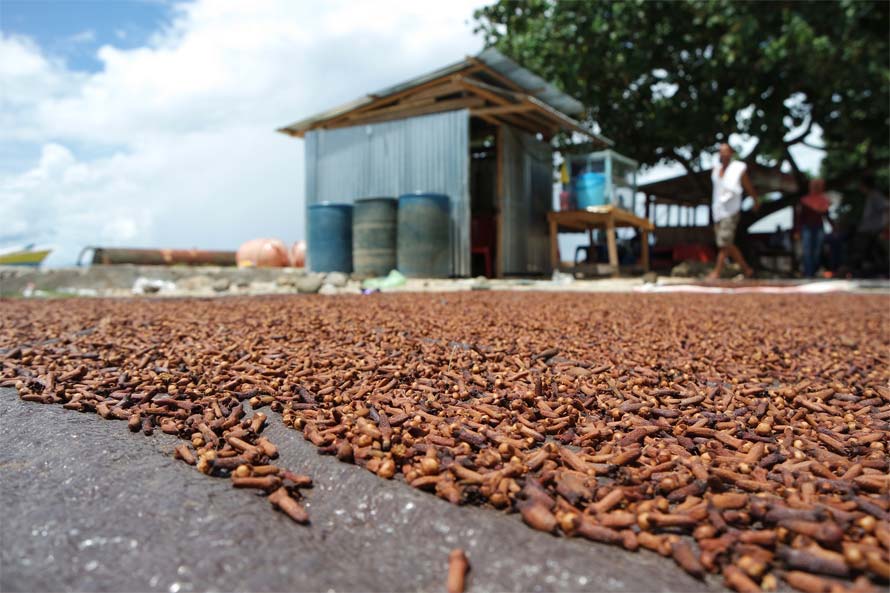 In mid-July, something else entered my nose. The smell was familiar. However, it felt strange to smell it in a coastal area that is closely related to the smell of salt. The foreign scent rode the wind, before finally being inhaled and entering the noses of people on Doi Island, Loloda Islands District. This is an island in the northern part of North Halmahera Regency, Maluku.

It was only after walking around Dama Village, the sub-district capital, that I realized that the foreign aroma came from cloves being dried in the sun. No wonder the smell of cloves is quite striking there. Especially on a sunny day. Clove flowers, both fresh green and dried brownish, can be seen in almost every corner of the village. In the field, in the yard, even on public roads.

“It’s not all harvested yet, ma’am. When it’s all harvested, the whole road is used for drying cloves, making it difficult to pass,” said Dama Village resident Nurhayati to the doctorSHARE team.

This scene only appears once a year and has become local wisdom, precisely during the clove harvest season two months later. During that time, there is no seafaring routine as is characteristic of coastal communities. Fishing boats are left parked by the sea. The houses looked deserted. Apparently, busyness has shifted to the sea of clove trees.

In the morning, the clove farmers, including Nurhayati and her husband Anto, are busy preparing for their gardens. They prepare everything from tools to food and drink. At around 8am, they rush to the farm.

They usually use a motorcycle with a travel time of only 30 minutes. However, the rain that poured down on Dama last night made the road slippery and muddy. Therefore, they choose to walk even though the travel time is twice as long.

Clove trees lush on the left and right of the road along the way to his parents’ farm. In the area they call Mount Paniki, other farmers have already arrived. The children would also join in the gardening if they had a day off from school. In a neighboring garden, there were already farmers picking cloves while drumming. Anto and his three colleagues are still preparing.

A rope serves as a pulley. A bamboo stick serves as a place to sit while picking the clove flowers. The clove pickers carry the salapa, or sack, to the top of the tree, which is about 5-6 meters high. Slowly but surely, the salapa is filled with this aromatic spice.

Morning turns into afternoon. When the sun is directly overhead, they have lunch. By dusk, the farmers return home with a sack full of harvest.

“In the afternoon, the houses are busy. They gather to cude (separate the clove flowers from the stalk) while chatting or having coffee,” says Nurhayati.

The next day, the cude is laid out on a tarpaulin mat and left to dry. If the sunlight is good enough, it only takes two days for the fresh clove flowers to dry completely. It is a different matter if it rains.

“If it rains, the half-dried cloves have to be dried again, resulting in poor quality. The cloves are hollow and easily broken,” said another resident, Fatmi, who also has a clove plantation.

The dried cloves are ready to be sold to collectors. In Dama Village, it is not uncommon for farmers to bring sacks of cloves directly to Tobelo or Ternate at a selling price of around Rp 115,000 per kilogram.

According to Dama Village Head Anwar Hasan, the price of cloves in Tobelo had dropped to Rp 90,000 per kilogram. This is also the case with this year’s harvest. There was a 50% decrease from the usual 400 tons. The reason is the long dry season that hit for several months before the harvest.

Cloves and several other Maluku spices have been famous since the Portuguese and Dutch colonial times. Their popularity has lasted until now. Domestically, the spice with the Latin name Eugenia aromaticum is used by the cigarette, food flavoring and cosmetic industries, among others.

One of the doctorSHARE volunteers, dr. Yonathan Purnomo, Sp.B., said that the eugenol content in cloves functions as a local anesthetic and relieves toothache.

The results of research by the Miguel Hernandez University team in Spain corroborate this statement. They identified cloves as a eugenol-containing spice that actively blocks the propagation of pain due to inflammation of the nerves and blood vessels in the tooth (pulpitis).

The study also showed that cloves contain high phenolic compounds that make them the best antioxidant. This conclusion was obtained through comparison with four other antioxidant properties. Antioxidants themselves are useful for warding off free radicals, preventing cancer cells, and are good for skin health.

The great potential of cloves in the country is inversely proportional to the support of the local government. The head of Dama Village, Anwar Hasan, admitted that he had applied for fertilizer assistance to the district government. However, there has been no realization to date. Although clove tree maintenance is not complicated, he still hopes for fertilizer assistance to increase yields.

“In other areas, they got fertilizer aid, it was buried, and in the end, it was wasted. Meanwhile, here, we have asked for it, but it is not given,” he complained.