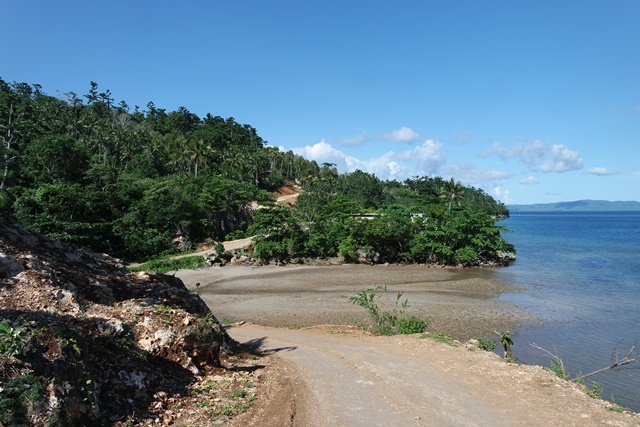 “The water there is the color of cappuccino!” exclaimed Anwar Hasan. That’s how the head of Dama Village, Loloda Islands Subdistrict, described the condition of the sea near Cera Village, which turned brownish due to manganese mining waste in the form of tailings.

When I visited the company’s employee mes located in Dama Village, I saw two dusty trucks parked not far from the entrance portal, the same fate as a heavy equipment. Vehicle accessories such as tires were stacked in the corners of the garage. Moving closer to the building, the words “OFFICE” were displayed on the glass of the main room.

There are three people in the shelter. On the ground level, a man is busy with his laptop while another one is sleeping peacefully near the door. Another person invited the doctorSHARE team to visit the mes on the second level. He was Arief Mulyadi, who was engrossed in his cell phone at the time.

“There are only two management staff here now, plus five security guards and cooks,” Arief replied when asked about the number of active employees.

He tells me that the remaining employees play a dual role. They must be able to manage money, take care of administration, monitor overall mining activities, and so on. This will continue until the company’s activities return to normal, namely after the mining license is liquid again.

“The permit is being processed at the center,” he said.

When met at his residence, Dama Village Head Anwar Hasan explained that violations of the provisions of the Environmental Impact Assessment (AMDAL) were first smelled by residents from the PT Elga Astamedia mining site located in Cera Village. The company was the first to explore Doi Island in 2003.

After observation, it was proven that there were violations related to waste management and land rehabilitation obligations. The color of the sea around Cera Village turned brownish due to deposits of manganese mining waste. In addition, the former dredging area was left bare. As a result, all mining company licenses on Doi Island were revoked.

“Initially, there were residents of Cera Village who complained about the murky sea water. From these complaints, it was found out that PT Elga did not fulfill the AMDAL provisions. The land was dredged and left unattended. The garden is now barren,” he said.

Research related to AMDAL has also been conducted by a team from the Mining Engineering of the National Development University (UPN) Veteran Yogyakarta on manganese mining activities in the districts of South Central Timor, North Central Timor and Belu.

The study noted sixteen points of the impact of manganese mining activities, one of which caused a decrease in the diversity of flora and fauna which is a domino effect of declining water quality. This is supported by Anwar’s statement.

“Because of that, fish became difficult to find. But now there are more,” he said.

In addition, another impact of manganese mining is the increase in dust that causes air quality to decline. This condition is exacerbated by the absence of mining land rehabilitation. Dust, which is classified as a pollutant or air pollutant, is increasingly rampant.

Another study was conducted by Environmental Health students of the Faculty of Health Sciences, State Islamic University (UIN) Alauddin Makassar. The result is that high temperatures can accelerate the chemical reaction of changes in an air pollutant. With slower-moving winds, air pollutants will be difficult to settle on the earth’s surface and separate from the air.

Furthermore, the pollutant load contained in the air can enter the body through the respiratory system. The most common health impacts are Acute Respiratory Infections (ARI), asthma, bronchitis, and other respiratory disorders.

Manganese is a metal mineral commonly used in the iron smelting, steel, and other metal processing industries. Manganese is also used for stainless steel and alloy formulas. In addition, manganese can also function as a dry battery material, green color remover, or violet color enhancer in glass.

Based on investigations conducted by the Geological Resource Center Team in 2006, there are many indications of manganese distribution in Doi. Broadly speaking, it is divided into six zones, namely Tabua, Galao, Tonggowai, Toba, and Cera. The zoning system is made considering that manganese deposits in the area are one of the potential in Indonesia, apart from the East Nusa Tenggara region.

Plus, the total amount of manganese there reaches 326,250 tons with fairly good quality, namely the average total manganese content ranges from 30%-45%. Currently, the bamboo curtain country is still the largest export destination for manganese from Indonesia.

Unfortunately, the doctorSHARE media team did not have time to check the condition of the former mining site in Cera Village directly due to unfavorable weather and transportation constraints.