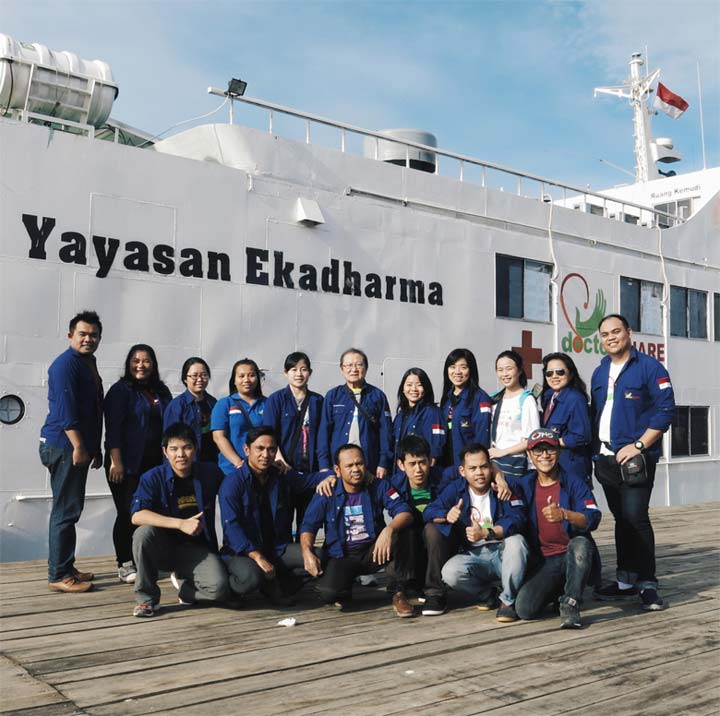 On August 2, 2016, a total of 526 residents were registered for general medical services conducted in two locations. The most common disease suffered by patients was hypertension or high blood pressure. The arid terrain makes the roads dusty, a condition that is suspected to be one of the main reasons why many residents suffer from Acute Respiratory Infections (ARI).

The distance between the villages makes residents use a variety of vehicles to get to the public treatment location at the Puskesmas Bantu (Pusban) in Riwang Village. In fact, trucks were deployed to transport residents from Lomu Village, Batu Engau Subdistrict – East Kalimantan.

Every village in Batu Engau Sub-district already has a midwife. During this time, midwives have been conducting medical activities assisted with simple equipment.

The team also performed major surgery at RSA Nusa Waluya I. The team recorded 8 major surgery patients during the medical service. According to the doctorSHARE team’s major surgery coordinator, Dr. Corrina Giovani, the most common type of major surgery case was hernia.

In addition to general and surgical treatment, the team also conducted health counseling. Being far from the city does not make Batu Engau teenagers immune to juvenile delinquency such as drugs and pornography. Counseling on the dangers of juvenile delinquency and health was conducted in three schools with various levels, namely elementary, junior high, and high school.

This series of medical service activities is fully supported by the Riwang Village Head, especially since long distances to hospitals and damaged roads make it difficult for residents to seek treatment in an emergency.

“We Riwang villagers are very supportive and grateful for this activity. If possible, do this activity regularly,” said Riisno, Riwang Village Head.

The medical services from August 1 – 8, 2016 ran smoothly. The enthusiasm of the community can be seen from the flock of people who came to the medical service location, including those who came from other villages. The presence of doctorSHARE team in Riwang Village is also expected to increase the awareness of the community to care for their health.

“The medical services went smoothly and all cases could be handled although there were some cases that we had to refer to the Kerang Health Center,” explained Dr. Rocky Ellery James Tumbelaka as the coordinator of doctorSHARE’s medical services in Riwang Village.