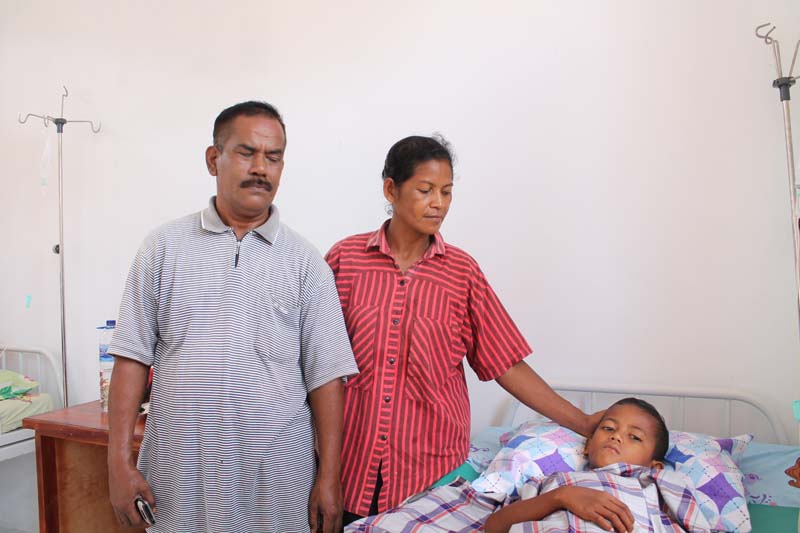 A month before the medical service mission, Maria Konikaba heard about doctorSHARE’s free medical treatment aboard the floating hospital from a friend. That information gave her son a new hope to be cured. After the ship passed by the front of the Galatama Field in Southwest Sumba, Alexander Lende (Maria’s husband) hurried to prepare a copy of the KTP (Indonesian Identity Card) and the Family Card. This is required to apply for the free surgery program.

The next day, the free surgery registration was held at the harbor of Waikelo. Early in the morning, Alex brought Maria and his two children to the harbor with his motorcycle.

Unfortunately, one requirement was not yet fulfilled. So Alex had to go back home in order to meet the head of the village to obtain a SKTM (Bahasa Indonesia: Surat Keterangan Tidak Mampu). The SKTM is a written confirmation that one is in a serious financial condition. The bureaucratic requirements are necessary since they allow doctorSHARE to identify patients and add the applied procedures to the records accordingly. Those exact records are important, especially in case the patients need further treatment. Of course, in case of an emergency, the bureaucratic procedure is not applied.

Alex left for the harbor again as soon as he received the SKTM since Maria and their two children were waiting there. The Temperatures were quite high on that day and Maria was worried while she was waiting for her husband. “I’m afraid that the registration will be closed soon,” she said.

The sky was already getting darker as Alex arrived with the SKTM. Vincentius (9) and Crista (7) were checked in right away. The two children were diagnosed with Hernia. Unfortunately, only Vincentius could be handled by the team from doctorSHARE because Crista’s physical condition was not required for the surgery.

Vincentius, who is better known as Epin, was actually diagnosed with a chronic hernia. “Since Epin started walking, we could see a bump on his lower stomach,” stated Maria while showing the bulge. ”He often cried until his face got blue when the bump suddenly hardened and grew.”

According to Maria, Epin’s feces were very hard, blackish, and only as big as glass beads. “Like the ones of a goat,” she explained. Epin’s condition was similar to that of his sister, Crista according to Maria: “Crista also feels a pain in her stomach and most of the time that bump also appears.”

Maria and Alex were working hard to take care their two children. The main problem was the family’s financial situation as well as the medical infrastructure. In Southwest Sumba, there is no general hospital yet so travelling to a hospital as well as the surgery itself is not affordable for the family.

Alex is a teacher with a low salary, Maria is a housewife. “It is not even enough to make a living,” says Maria. Crops that are needed for a daily bases are often not affordable.

A few years ago, Alex was trying to find an alternative treatment that is cheaper: Massage therapy. However, this approach was not successful. When Epin was massaged, he screamed because of the pain. The bump also seemed to be growing bigger. “So we stopped the treatment for Epin and Crista was not receiving it at all,” stated Alex.

This alternative treatment by massage is not recommended from a medical perspective. “Hernia will not be cured with massage. It will make a surgery even more difficult since it increases the stickiness of the affected organs and tissue”, explained the founder of doctorSHARE, Dr. Lie A. Dharmawan, PhD, FICS, SpB, SpBTKV.

After the surgery, Epin was relocated to the Watukaula community health service center to continue the post-surgery treatment. When the team from doctorSHARE visited him for a checkup, Alex and Maria said thanks and expressed their hope that the team would return to Southwest Sumba to operate Crista as well when she’d be old enough. For them, the team from doctorSHARE ignited a glimmer of hope in their family and especially in Epin and Crista who will be able to live a normal life in a healthy condition.