The New Life of Livia 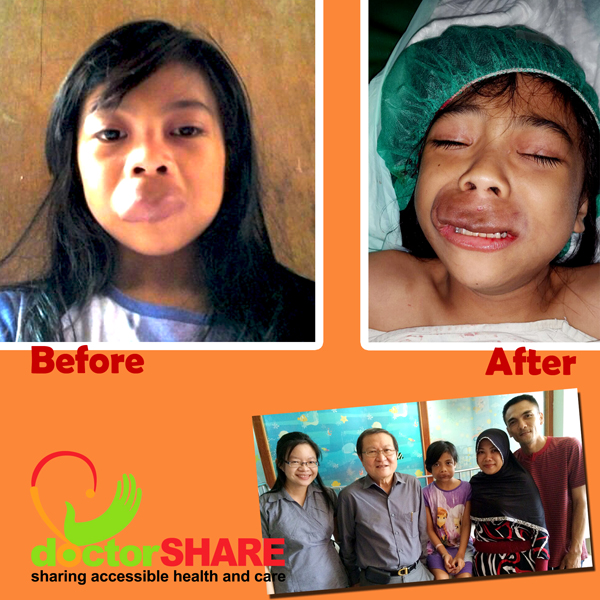 Elya Rosida was really glad. Her eyes were filled with tears thinking of her youngest daughter being able to go back to school. “This morning, Via’s teacher called me. She asked for her condition. I said to her: You will be surprised when you see Via. A new student is going to come to school tomorrow!”

Elya Rosida and her husband, Lalu Nukman, couldn’t hold back their emotions when they gazed at the apple of their eyes, Livia or “Via”. The long waiting period to see her recovered from her illness ended on Friday the 13th November 2015. Having suffered from hemangioma (vascular tumors) on the upper lip for nine years, Via successfully underwent surgery, which was performed by the founder of doctorSHARE, Dr. Lie A. Dharmawan.

“When we saw her coming out of the surgery room, we were really, really grateful. The lump had decreased significantly compared to before the operation. Previously, Via’s lower lip had been completely invisible since it was covered completely by the lumps on her upper lip”, said Elya.

Via was born nine years ago on the anniversary of Indonesia’s Independence Day in the city of Mataram, Lombok. Shortly after her birth, Via’s body was already exhibiting abnormalities.

“There was something like a small scar on her upper lip. I asked the doctor, who handled the delivery, about it and he said that it’s not problematic because it would go away. However, as time went by, it became bigger and bigger. The doctors told us to wait and we waited. But still it didn’t disappear,” said Lalu Nukman.

He and his wife were keen to visit several doctors in order to find out what the cause of Via’s abnormalities was. One day, a doctor diagnosed her as being infected by hemangioma or vascular tumors. Hearing the word ‘tumor’, Lalu Nukman was in shock since he did not know whether the tumor was malignant or not.

Since that time, her parents were trying to find ways to cure Via. With limited budget, they visited many doctors in different cities. One doctor told them that Via had to wait up to seven years before she could get the medical treatment she needed.

Waiting for seven years certainly is a long struggle, especially for Via. Lalu and Elya were committed to not expelling their daughter from daily social interactions.

“At the beginning of school, we were afraid that Via would be upset because of her friends’ mocks, but she is a strong girl. She’s been mocked by some of her classmates who told her, that her mouth looked like a duck’s beak but she remained strong,” said Elya and her husband nodded.

“Actually, I am the emotional one of us. If someone stares at Via, I will stare back at him”, Lalu Nukman admitted.

Via endured various medical treatments but those have always been futile. Instead of getting better, Via’s upper lip was growing larger and larger, even after it already covered her bottom lip.

The family was almost desperate enough to give up, especially considering their debt, which had meanwhile grown to an immense amount. Lalu Nukman’s salary as a civil servant on the middle level, could not cover the cost of Via’s treatments. “She’s a tough girl though,” said Elya.

One day, a little gleam of hope arose when Elya saw the presentation of the profile of doctorSHARE which was aired on Metro TV‘s “Kick Andy!”-program (2013). Through that TV program, Elya heard about Dr. Lie, a cardiologist who travels to the remote areas of Indonesia to provide free medical services on a floating hospital.

With new hope in her heart, Elya told her husband about doctorSHARE. Since that day, they were trying to find out the route of doctorSHARE’s missions.

Two years later, Lalu’s and Elya’s efforts finally paid off. Through the correspondence with doctorSHARE, Livia could get the surgery she needed in Jakarta, the capital city of Indonesia.

As the operator, Dr. Lie said that bleeding during the operation is a serious concern for every doctor. In Livia’s case, the surgical process which took an hour to perform did not require extra blood which was a very positive thing.

“The vascular tumor could be removed. From now on, Livia will feel an improvement. This operation was important because if the tumor had been able to continue to grow, someday Livia wouldn’t have been able anymore to get an operation,” Dr. Lie stated.

Before the operation, her whole school held a joint prayer for Via’s recovery. Via, who was in 3rd grade at that time at SDN 01 School Mataram, was considered a smart student. She was always achieving grades among the fifth to tenth best in the ranking in her class. Her classmates were giving their full support for Via to recover after her operation.

Lalu and Elya said that after the operation, Via’s conditions had improved incredibly. Meanwhile, her lower lip is already visible. Her parents are really happy now because Via is able to open a new chapter in her life.