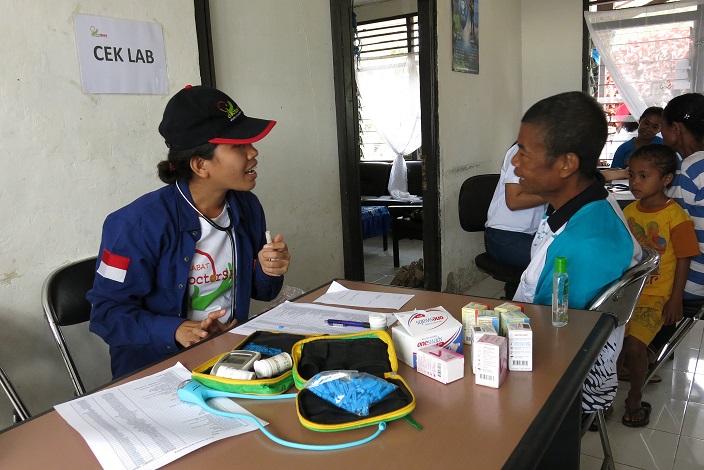 The local community worked together to help the team carry medicines and medical equipment. The enthusiasm of the community could be seen as they welcomed the arrival of the doctorSHARE team.

“So far, it has been very difficult for us to reach health services. With the arrival of the doctor team, we who are in this remote village are very happy. We need health services,” said the Head of Riring Village, Welem Supulatu.

Along with the general treatment, the doctorSHARE team also performed minor surgeries which were attended by 10 patients with 11 cases. The two most common cases were lipoma and atheroma cyst.

The choppy sea conditions accompanied by strong winds became a challenge for the team, both on the way to and from Tahalupu Village, as well as when transferring postoperative patients from RSA dr. Lie Dharmawan to the local Puskesmas for further treatment. The lack of a dock meant that the RSA could not dock on the mainland of Tahalupu Village.

This kind of access difficulty is always complained about by the community when they need medical assistance.

“There is only an auxiliary health center here, with no permanent doctor. If you want to go to the hospital, you have to go to Ambon by speed for more than two hours. Not to mention that the fare is very heavy. When the waves are like this, people are often afraid to go out,” said a Tahalupu resident, Amirudin.