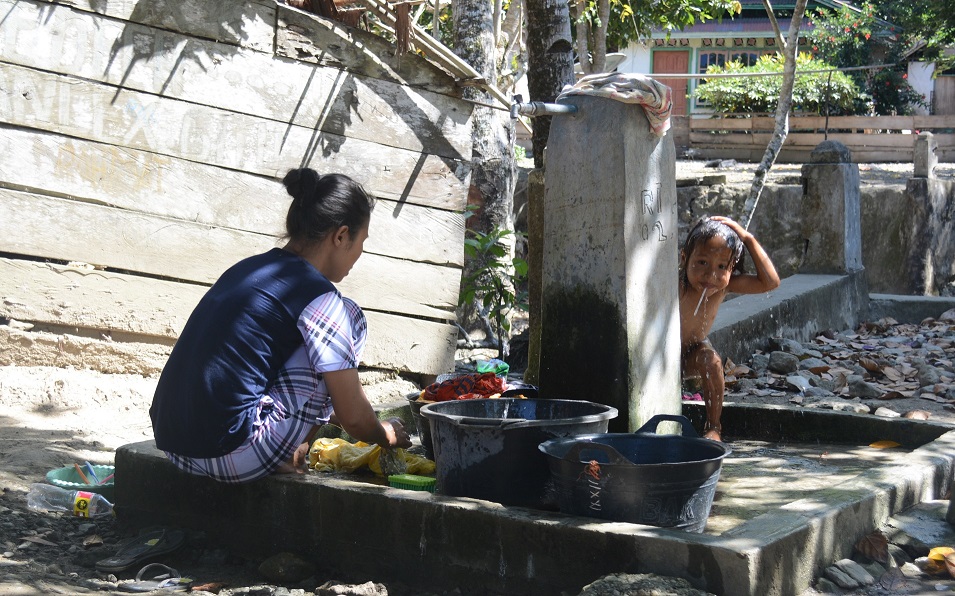 How the residents of Tahalupu Village, West Seram, Maluku, who were once affected by an outbreak due to polluted water, now have clean water.

No one remembers exactly when it happened and the exact number of victims of this terrible event. However, the residents of Tahalupu Village have one distinctive marker: it happened after the Ambon riots in the 2000s.

Amirudin Umagap (39 years old), one of the residents, remembers those days with a chilling tone. “Today, a child died in one house, and just after burying it, another child died in another house. This went on for days,” he said. “One cry has not yet dried, followed by another.”

Apart from children, there were also adults who were victims. They all died from diarrhea. The local people call it vomiting (muntaber). The number of victims is estimated to be more than 20 people.

There is no doctor in this village. Health workers are also limited. Tahalupu Village is located on Kelang Island, West Seram, Maluku, which is about 3-4 hours from Ambon by speed boat or 2-3 hours by sea from the district capital, Piru.

As Kasman Umagap, Secretary of the Village Consultative Body (BPD) recalls, after the incident the health department from the district conducted research on the community’s water source. At that time, the community got water for cooking, bathing and washing from the river and wells.

At that time there was indeed an effort by the local government to build a clean water network for the community. The construction had not yet been completed, but Maluku was plagued by the Ambon riots in 1998-2000. The workers, who were mostly Christians, did not continue their work. The population of Tahalupu village is 100% Muslim. The construction was abandoned.

A few years later, there was another follow-up from the local government for the construction of a clean water network. At that time, water was channeled from a spring in the mountains using a pipeline. After only a year, the water flow decreased and then stagnated even though the dry season had not yet arrived.

Feeling odd, the community opened the paralon and found that it had been filled with lime. Apparently, they had been consuming chalky water for a year. No wonder, to the knowledge of Iwan Nidihu (39 years old), at that time people were found suffering from skin diseases.

“People here call it ‘sarampa’. The whole body was covered in red spots. His whole body was hot,” said Iwan, the officer appointed by village officials to take care of clean water.

The community does not want to take risks. They are reluctant to return to using the water that flows from the pipes. They also use the river to meet their water needs. During the dry season, people have to walk for hours to water sources in the mountains to get clean water for cooking or washing.

There are two other aids from the government to deliver water. What the community is currently experiencing is the fourth water project. According to Iwan, the project has been running for about three years and last time, water was delivered using iron pipes.

However, the construction of this network does not deliver water directly to each house but in the form of Public Taps (KU). There are a total of 30 KUs in Tahalupu Village. The number of KUs per RT varies according to the number of households. For example, in RT 1 there are 4 KUs and in RT 6 there are 5 KUs.

Community Initiative Network
Apart from the KU, there is another source of clean water network. This network is purely the initiative of residents who want to have clean water flowing directly to their homes. They worked together to make it happen, from buying paralon, hoses, to contributing labor.

“Only residents who help can enjoy this clean water,” said Hasan Umasugi (50 years old), one of the residents who participated in the mutual cooperation.

This community water network only flows to around 40 houses. The spring is separate and only for a few people. The flow is very strong and does not know the time of day – neither the dry nor the rainy season: morning, noon, night.

In Hasan’s house, for example, the faucet does not function normally. Water sometimes overflows everywhere, even during the dry season like this August. This scene is certainly different from the KU. Because it is used in congregation, the water from the KU only flows in the morning and at night.

Nevertheless, the community is still grateful. At least they no longer have to climb for hours to the mountain to get one or two jerry cans of clean water.

Caring for Water
When it comes to water, Iwan admits that he is often annoyed with residents who don’t pay much attention to maintaining the water. Although he was given the task by the village, he is overwhelmed if he has to take care of this water issue alone. He still needs help from the villagers.

After all, Iwan has to work. “We still need to eat,” he said. Money from water management is uncertain. Sometimes he gets payment, but even that is not much. Therefore, he charges a fee of Rp 300,000 for residents who want to install water from KU to their homes. He uses the money to buy iron pipes and hoses.

Iwan has his own way of taking care of the water. If residents are reluctant to cooperate, he will approach the school principal and ask students to work together to clean the water source or plant trees around the water source. Tahalupu village has two elementary schools, one junior high school, one middle school and one high school. Together they go up the mountain to maintain the water source.

Iwan admits that it takes more energy to maintain the springs.

These tanks are made of cement. This layered filtering process is done to ensure that the water is clean and safe for consumption.

They take care of the water by cleaning the trash in all the tanks. Kasman revealed that village officials have appealed to residents not to cut down trees in the spring environment.

“In order to preserve the water, so that it can continue to be enjoyed by our children and grandchildren,” said Kasman.

According to Kasman, the clean filtered water minimizes the risk of residents getting diarrhea or vomiting. They are safe to consume this water. In fact, a number of elementary school children lightly drink water directly from the KU at their school. In fact, it is raw water.