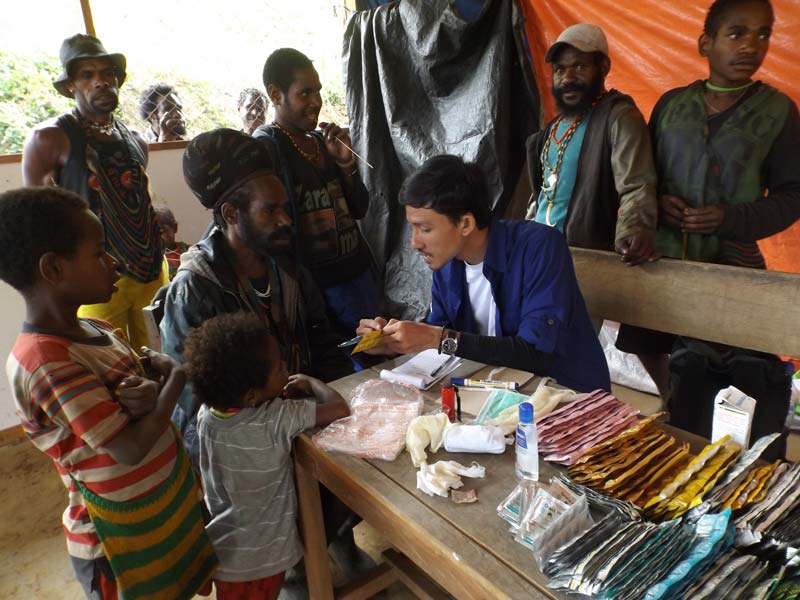 It was my first experience with the team from the Flying Doctors program and also my first journey to a province located at the eastern edge of Indonesia. That area is very rich in traditions, culture and also nature: Papua.

While following the guidance of our field coordinator, Dr. Riny Sari Bachtiar, I was a little bit puzzled because she explained that the terrain we were going to was extremely difficult to access. The journey would take us far away from modern infrastructure so the road, which we would have to take to reach our final destination, was not quite feasible. Even the climatic conditions were tainted with uncertainty.

After hearing Dr. Riny’s explanations, I prepared according to the aspects, which were discussed in the briefing. The preparations were ranging from packing my personal equipment as well as the medical equipment, which was necessary to conduct the medical services in the Ugimba District of Papua. After doing so, we were finally ready to leave for Papua.

The Flying Doctors’ team contained 6 people in total, consisting of three physicians, one gastrointestinal surgeon, and two media volunteers. We took off from Jakarta at 9:30 pm IWST (Indonesia Western Standard Time) and arrived in Timika at 05:30 am IEST (Indonesia Eastern Standard Time) the next morning. After that, we continued our journey to Sugapa, the capital city of the Intan Jaya Regency at 11:30 am IEST and landed there at 12:20 pm IEST.

When we arrived at Sugapa, we went to our halfway house there immediately for relaxation and preparation. In this wooden house, we made various necessary arrangements for our medical service mission in the Ugimba District.

While waiting for our departure to the Ugimba District, we received a message, which told us that there was a female patient nearby who had been suffering from severe shortness of breath (dyspnea) for the last two months. After hearing these news, we went to the patient’s home. During the examination, a lot of fluid was found in her lungs which made her become short of breath.

We were also communicating with the local Community Health Centre to provide further health care for the patient because we had to continue our journey to conduct our medical service mission in the Ugimba District.

After finalizing the preparations, we started our journey to the Ugimba District on foot. The trip started at 07.30 am IEST and we arrived at our destination more than 13 hours after we had headed off, at 08:40 pm IEST.

It was a very long, tiring, as well as dangerous journey. The energy of the team was depleted but we were very grateful to be able to arrive at our destination safe and sound.

This reality of the people living in Papua is very extreme. It is an incredibly rich province but there are still many people who live a life in poverty. This is a serious problem, which requires hard work and strong determination to be sorted out.

We strived to help the population and put all our efforts into the provision of medical services. However, this is not enough. It is necessary to obtain the cooperation among the various parties on site to improve the life of the people of Papua in the future.