No More Razor-Blades On Foreskin 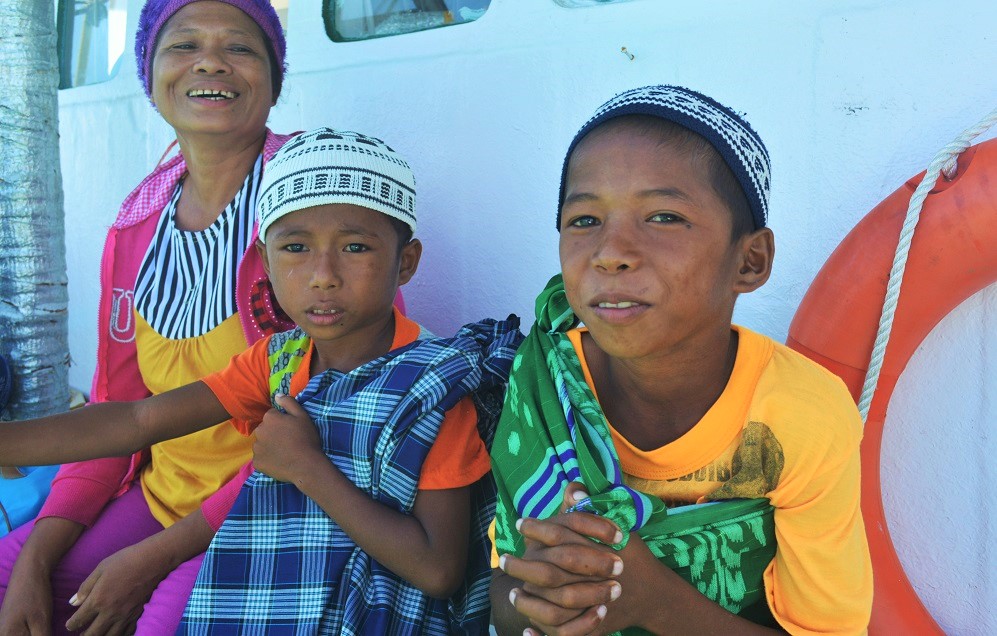 The two brothers, Husain (12) and Irpan (9) were smiling shyly when they were asked about their experience of being circumcised by a volunteer doctor from doctorSHARE on the Floating Hospital “Dr. Lie Dharmawan”. Still smiling shyly, Irpan tried to explain.

On Monday the 22nd of August 2016 in the early morning, they had made-up their minds: They were ready for circumcision. On that day, they had the permission to skip school. The day before, they had heard from their school-mates and friends that getting circumcised by a doctor is not painful and not the same as the procedure usually performed by the local village circumcisers. Many friends of Irpan had already registered for a circumcision, too.

Accompanied by their father, Husain and Irpan came out of their house wearing a Sarong and a Peci (a cap mostly worn by Indonesia’s Muslim population).

They showed their cheerfulness but smiled shyly when a boat took them to the Floating Hospital which was docking off-shore. When entering the surgical suite and being asked to lay down, Irpan said that he was not worried at all. This was due to the fact that the doctor had asked him to sing a song in order to relax. He sang a song from the Moluccas of which he did not even remember the title.

“I did not even finish my singing yet, when the doctor already said that it was done”, Irpan said, “it did not hurt at all, I didn’t feel anything”.

After their circumcisions were done, Husain and Irpan were able to walk immediately so they went home. One day later, they were already in their usual shorts again and could go playing. “So, that was the story”, Irpan explained.

Irpan was still smiling shyly when he ended his story showing a line of neat white teeth. These two boys were laughing without end. Husain was so happy at the time that he could laugh cheerfully, too. However, he had made a completely different experience when he was in his 3rd year of elementary school and about 8 years old. At that time, Husain was about to be circumcised for the first time by the local village circumciser.

Like most of the people in the villages of Maluku, the Tahalupu villagers are Muslims, so the circumcision is obligatory. None of the Muslim boys is uncircumcised. However, due to the insufficiency of medical personnel, circumcision in a number of villages – including Tahalupu – is still performed using some old, traditional methods without any anesthetics and with razor-blades to cut off the foreskin.

This method has not changed over time. A boy who is ready for circumcision is held on his father’s lap. Close to the father’s feet, an empty bowl is prepared and also a cut-open chicken egg which is filled with approximately one-third of its original content. This egg contains only the yolk which had already been stirred.

The same method was attempted to be applied to Husain when he was about to be circumcised for the first time. At that time, he indeed wanted to get circumcised. But just as he was hold on his father’s lap, he was too scared that he got mad. His father and family were trying hard to keep holding Husain’s hands and legs.

His father kept trying to calm him down but this attempt was not successful. At that time, the circumciser was sitting cross-legged in front of them and was ready with his tweezer. The tweezer is made of a piece of bamboo which is split into two parts. The circumcision ceremony was about to be carried out. The feast was already prepared and prayers had been said and sent-up.

This razor-blade had been sterilized by putting it into hot water just before the application. The circumciser cut off the anterior part of the foreskin. Husain’s foreskin should have been cut off entirely at that moment. However, since he was struggling so hard, the circumciser could only perform a small incision.

“It was just the traditional way to do it. The conventional circumcision was to be done”, Husain’s father, Amirudin Umagap (49) or Amir, tried to explain, “as usual practice, once the prayers are said and sent-up, the boy shall be circumcised regardless of struggling or not “, he said.

Once the foreskin is cut-off, usually blood comes out of the penis. As the blood gushes, the bowl below is prepared to gather it. At the same time, the penis is dipped into the egg yolk.

Fortunately, Husain’s bleeding stopped once his penis was dipped into and cooled by the egg yolk. Usually, when the blood keeps gushing, the family has to ask a shaman to come and send prayers for to stop the bleeding by spitting on the newly circumcised penis.

Assuming that the first shaman is not capable, then the family has to ask another shaman for help. This goes on until the bleeding stops. In some cases, the blood that gushes from the penis can fill many bowls.

“It once happened that the blood filled up ten bowls”, Amir said. “The boy’s face and body were looking so terrifying”. When Amir was a boy, he was circumcised together with his 2 cousins. One of his cousin’s blood filled 3 bowls.

After finishing all the rituals, a newly circumcised boy is unable to go anywhere. He has to keep laying on his bed for 3 up to 7 days. All his daily activities such as eating, urinating, and even defecating have to be done on bed.

“When the son gets circumcised, the parents can get very busy”, Amir said, “when he wants to urinate, we help him by preparing a pot, when he wants to defecate, we have to lift him up”.

To enhance the efficiency, the boy can be taken to the beach ordered to submerge under sea-water. By doing so, the salty water can make the wound dry faster. However, that’s the fastest way to dry the wound so the boy is able to resume his day-to-day activities soon: going to school and playing.

In the village of Tahalupu there are only two circumcisers. They are called Dusa Umagap (59) and Alwan Umagap (56). Dusa still performs circumcisions according to the traditional methods whilst Alwan makes use of mixed techniques: the conventional one combined with modern ones.

Alwan is able to do so due to the transfer of knowledge from his son, Arman Umagap (23), who is an employee of the Local Government Clinic of Tahalupu. Arman had absorbed the knowledge and gained experience during his studies at a Health Academy in Ambon.

On his duty, Alwan still uses his traditional tweezer. However, before being clutched, a boy’s penis is at least anaesthetized locally. Additionally, instead of using a razor-blade, Alwan uses chirurgical scissors. He also performs suturing after the completion of the cutting. This is a huge improvement compared to the traditional approach. However, this technique can only be seen as an interim stage to a truly modern procedure. Unfortunately, it costs about IDR 500,000 (about 40 US$) and is therefore not affordable for most of the local people.

After all, even this interim stage is an important improvement since a circumcised boy needs to stay in bed for a shorter period of time. Within 2 to 3 days he is already able to wear his shorts or pants again. The village people believe that a newly circumcised boy should be allowed to go farther away from home only 3 days after being bathed by a circumciser.

And it is all due to the fact that they were circumcised with modern techniques by the volunteer doctors from doctorSHARE on the Floating Hospital “Dr. Lie Dharmawan”