Pain-free circumcisions aboard the Floating Hospital “Nusa Waluya I” 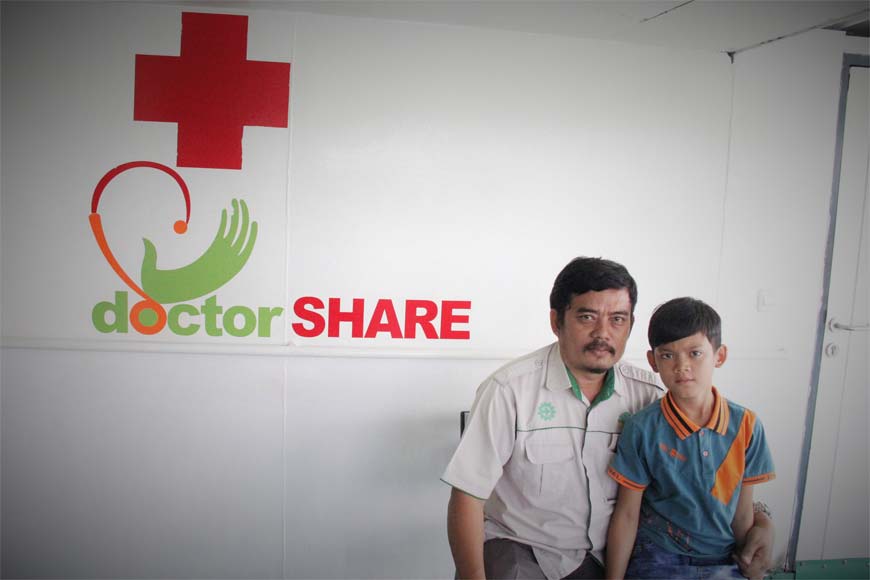 A tense feeling was reflected on the face of the 7-year-old boy. The cheerful smile, which had been on his face when he arrived at the Floating Hospital “Nusa Waluya I” with family and friends, had faded. The Nusa Waluya I docked off the coast close to the Riwang village, Batu Engau, East Kalimantan (Borneo).

The boy’s name was Abdul Widyatama. The second grade elementary student came to the Floating Hospital to be circumcised. Abdul was not the only boy who was aboard the Nusa Waluya I for circumcision during the medical service mission. There were nine operations during the three days of the mission. Performing a circumcision on a ship is a very difficult procedure.

“In the past, he should already be circumcised once during a mass circumcision in the Riwang village, but he was too scared to do so. Now there is the Floating Hospital. He was invited to get his circumcision and eventually agreed to get it done”, Abdul’s parents stated.

Although Abdul felt proud of getting his circumcision aboard a Floating Hospital his strained face was unable to hide his fear. The fear radiated from the boy’s face while he was waiting, especially when he heard the cries from other patients who were circumcised. For some kids, only the expressions on their faces had changed, while others wanted to go home.

Some parents tried to distract their children in a variety of ways such as providing toys and food for them and even by inviting them to walk around the ship.

Zaky, a nine year old boy and a friend of Abdul, also came for the circumcision. He was curious about Abdul’s circumcision process. The room, in which he waited, was not far from the operating suite.

Zaky wanted take a look inside, but his father did not let him. He didn’t want his boy to get scared and prevent his own circumcision. In fact, most of his friends were already circumcised. Eventually, his father took Zaky to walk around on the ship’s deck.

Loud shouts were coming from the circumcision patients and echoed through the Nusa Waluya I. When the three minor surgical rooms were used for circumcision at the same time, the cries were heard as a tragic choir.

The boys did not cry because the operation causes them pain, but because they were scared of the procedure. They knew only the traditional, painful technique and expected the modern procedure to be painful as well, even when they were told differently.

Also, many boys were afraid of syringes. The crying can lead to a vicious circle aboard the Floating Hospital: When some of the boys start crying and others hear it, they also tend to cry. However, the circumcisions were performed quickly and without pain, which surprised the boys and their parents as well. It will still need some time until the population of the traditional communities gets used to the modern approaches of medical services and the people lose their fear of the procedures.

Circumcision is not only done due to the fact that it’s advised in some religions. It also has positive effects on a man’s health. Without circumcision, bacteria from the urine can stay in the skin layers where it causes diseases.

“Circumcision is the same as peeling off a skin layer. When we urinate, there is dirt left under the foreskin. There are several medical conditions known, in which e.g. the urinary tract can get blocked. Circumcision is an easy and effective way to solve this problem”, Dr. Rocky Ellery James Tumbelaka, a volunteer at doctorSHARE explains.

This statement is coinciding with the case of another patient on the Floating Hospital: Ahmad. He came to the ship to be circumcised, however, the doctor’s examination showed that there was blockage. Thus, it was necessary for additional actions to be taken. Ahmad suffered from phimosis, which a constriction or adhesions of the foreskin that makes it impossible to retract it completely. Phimosis can cause an accumulation of dirt on the glans.

The medical examination cannot be done partially, it has to be conducted in a holistic way. All patients need to be checked in order to identify any disease and treat it right away. Ahmad was also suffering from hydrocele testis, which is an accumulation of fluid around the testicles. Although not causing any pain, the fluid can cause inconveniences for the patients. Therefore, a medical treatment needed to be conducted in order to dispose of the liquid.

After his medical treatment, Ahmad was hospitalized together with his father who also had just undergone a surgery aboard the Nusa Waluya I. A smile started to appear on Ahmad’s face. Other patients could immediately return to their homes after the circumcision. Some of the boys were still crying – however, they still took their time to take pictures aboard the Floating Hospital.