Hope for the School Athlete 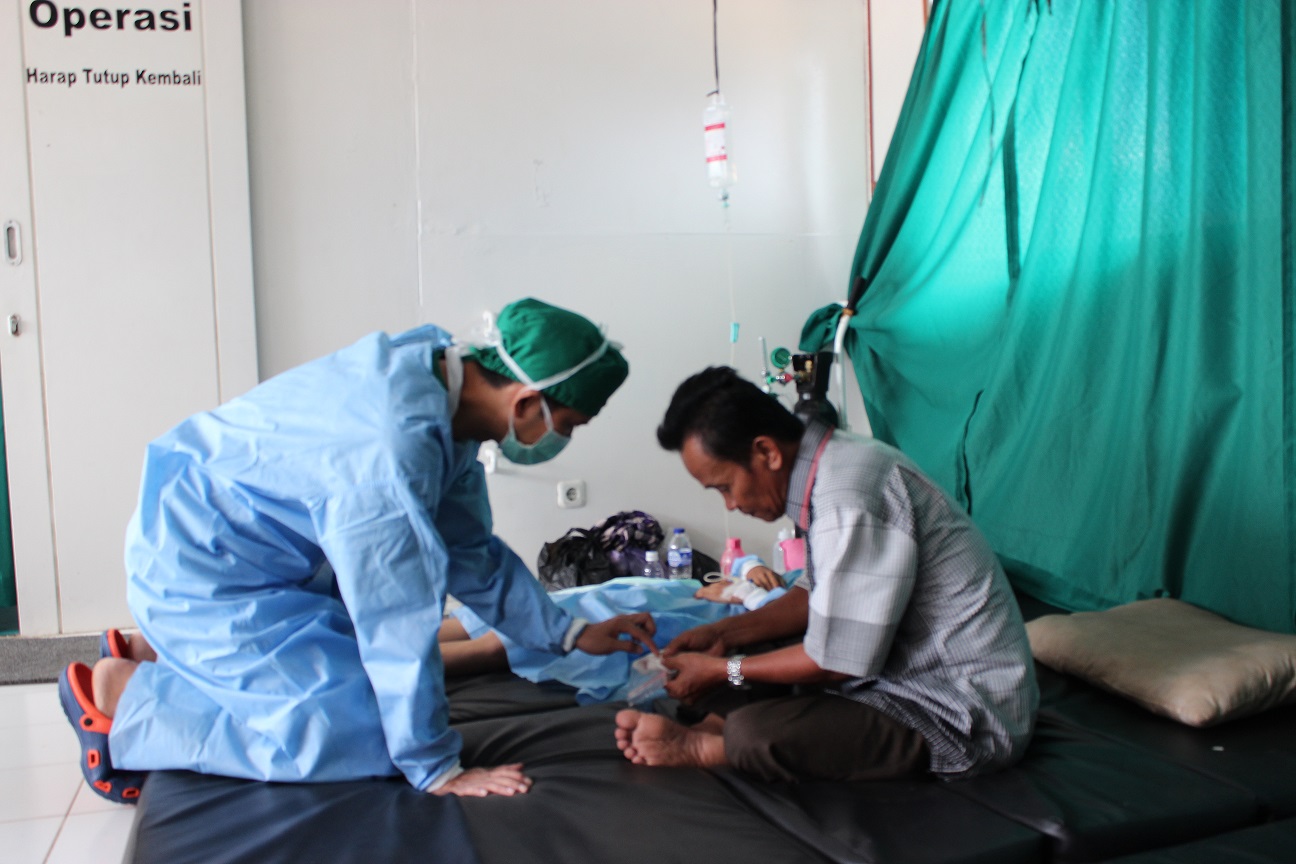 Amongst the people of East Muara Sabak, East Tanjung Jabung District, Jambi, a teenage boy was encountered by volunteers from doctorSHARE.

At the time, a team from doctorSHARE was holding a mission with a focus on general medication near the East Tanjung Jabung District. At a glance, the fourteen year-old boy named Nasir looked healthy and happy.

The day before, Nasir had been registered as a patient for major surgery. He had a hernia which the locals refer to as “turun berok”. He had a pre-surgery check-up and got an appointment for the procedure.

Nasir visits a “Madrasah Tsanawiyah”, which is comparable to a Junior High School. He lives in the Simbur Naik Village, East Tanjung Jabung District, Jambi together with his family. When doctorSHARE conducted their mission, Nasir was already suffering from hernia for 2 years.

“At first, his abdomen often felt sore after doing exercises. We thought it was only a common stomachache. But a friend told me that it was hernia,” Nasir’s father Jamaludin stated, when waiting for his son during the surgery at the Floating Hospital “Nusa Waluya I”.

Nasir had been an athlete who had been chosen as the school representative on sport competitions between schools several times. He mostly played football and “sepak takraw”.

Knowing that their son was suffering from hernia, Nasir’s parents often didn’t allow him to participate in the matches. As far as his parents knew, hernia patients should avoid heavy activity. Even though he didn’t get the permission from his parents, Nasir insisted to join in for several matches. On top of that, his teachers often asked his parents to give him the permission. Pain didn’t stop his desire to keep playing.

The presence of the team from doctorSHARE gave Nasir’s parents the opportunity to end his suffering. After doing all sorts of tests, he could finally undergo the necessary surgery. As if he already imagined how bright the days to come will be, he had a big smile on his face right after the operation.

The hernia surgery was performed well. Also at that time, the team from doctorSHARE found out that Nasir was having a descensus testis dextra also known as anomaly testis condition. The testis should be located inside the scrotum. However, in Nasir’s case, the testis were still located inside his abdomen.

After explaining Nasir’s condition to Jamaludin and getting a permission, the team performed a testis extirpation. “The patient was suffering from a descensus testis dextra. We tried to pull the testis into the scrotum which couldn’t be done because it was too tight so we had to extirpate it,” Dr. Yulius Wimbu Sp.B, a volunteering surgeon who operated Nasir, explained.

Jamaludin was very worried about his son’s future. Since the Testis produce sperm and are therefore very important for the reproduction, his father was questioning Nasir’s ability to have a child of his own.

That worry could be dissipated by Dr. Yulius Wimbo, Sp.B after the operation was done. He had checked Nasir’s condition also before the operation.

After trying to relocate one of Nasir’s testicles had failed, the team also checked the condition of the other testicle which was located inside the scrotum. It turned out that it was well-functioning. With one healthy testicle, a man is still able to get a child.

“If an extirpation is not performed, the risk of getting testis cancer is twenty to forty times higher compared to people with healthy testis. Also there is a risk for the testis to be twisted which will cause pain. The treatment in that case would also require a surgery,” Dr. Yulius Wimbo, Sp.B explained.

Despite the worries about Nasir’s future, Jamaludin had not provided the necessary treatment for Nasir. The simple reason for that is that Jamaludin is a rice farmer. Of course the surgery bills for such an operation is unfortunately not cheap.

That’s why Jamaludin expressed how thankful he was to the team from doctorSHARE which has treated and cured his son. He hopes that Nasir can recover entirely and grow up normally like his friends.