“Listening” To Noah’s Agony: A Little Child With A Big Abdomen 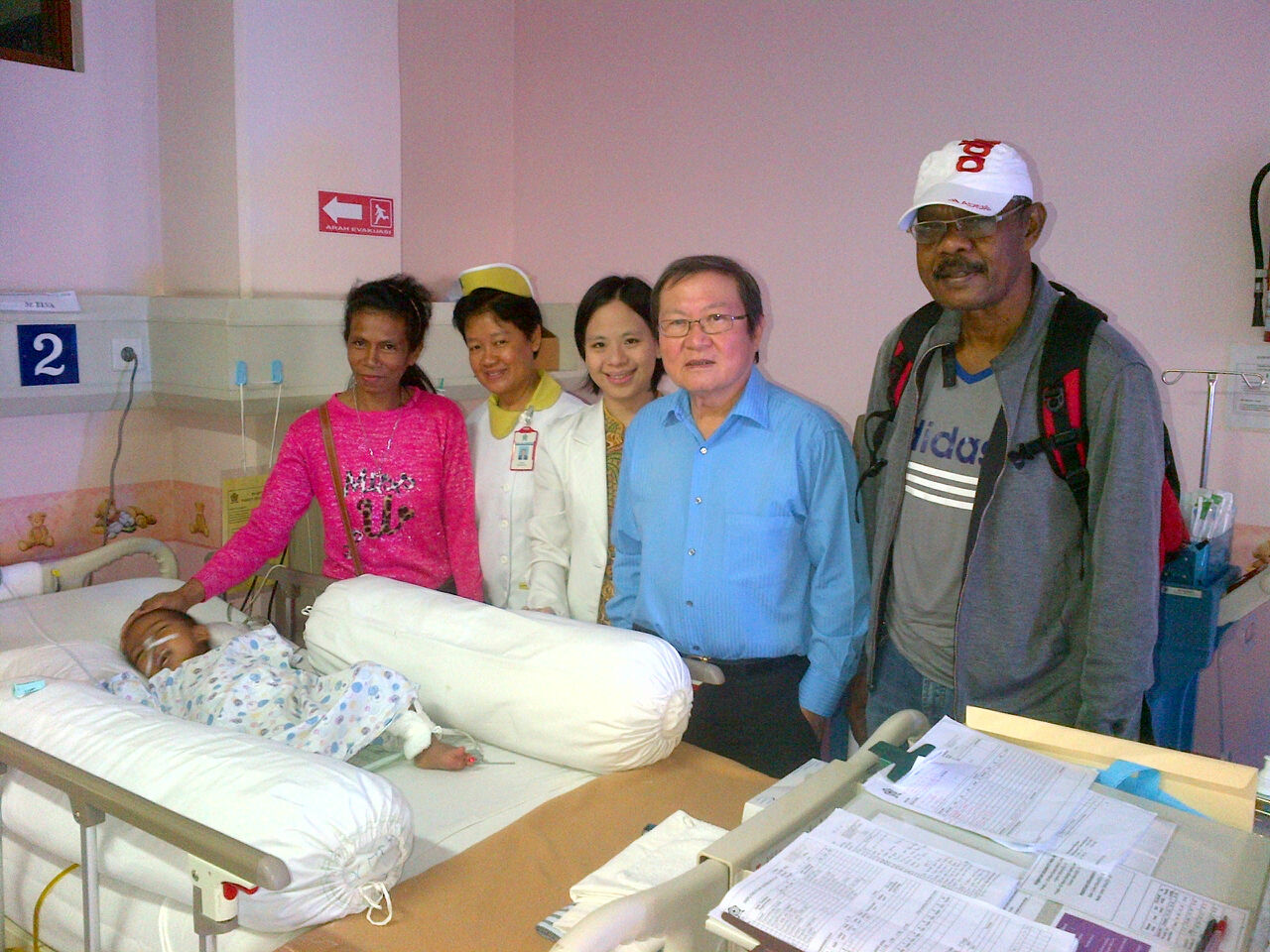 Share
21st October 2016, Martha left Kei Besar, South-East Moluccas, for Jakarta only for one reason i.e to have her beloved son, Noah Yehubebyanan (2 years old), cured. This cheerful little boy had a big abdomen diagnosed as “morbus hirschsprung”. Arrived in Jakarta, Noah’s abdominal circumference measured to 82 cm.
Since he was born, Noah had been unable to defecate spontaneously. He was only able to do it by manual stimulation using some soap. This was the cause which made his abdomen getting bigger. “Noah can only defecate once a week, and it has even still to be stimulated manually by inserting some soap, taking some bananas and papayas”, Martha said.
Martha told that this little boy who is her eighth child is actually a cheerful kid and fond of playing as other kids are. “Noah eats a lot and he usually plays at home. But sometimes his abdomen feels pain. It feels so tight”, Martha tried to explain.
Martha has once taken Noah to a Government Public Hospital “Karel Sasuit Tubun” in Langgur, Kei Kecil, South-East Moluccas. Noah’s faeces was sucked-out, so that his abdomen deflated. However, within few days, his abdomen became bigger again as faeces accumulated.
Nevertheless, Martha still kept trying to get Noah cured. Sailing by boat from Dangarat Village, South-East Moluccas, she took Noah to  another Government Public Hospital “Dr.M.Haulussy” in Ambon. After about one hour trip, unfortunately, her hope was still unfulfilled. The doctor in the hospital said that Noah had to be at least five years old to be able to have such surgery.
Martha then lost her hope. She took Noah back home. She thought that it might be better still taking care of him at home rather than letting him stay in the hospital with no help as her financial condition did not support. Noah’s parents are just farm-workers. Noah was not taken to bigger hospitals such as in Makassar or Jakarta because his health-insurance from BPJS was still under process which was promised would only be ready by the end of October 2016.
Martha had no more idea what to do next. A clergyman helped her spreading the information by putting some postings into facebook hoping there might be any benefactor who was willing to help.
And one of the doctorSHARE’s benefactors saw the postings and soon the benefactor shared this information. Besides doing some donation, the benefactor was also willing to invite and get other benefactors to give financial supports for Noah’s surgery in Jakarta. In the course of time, there was also a benefactor who was ready to help by providing free airfare tickets for Noah, Martha, and Noah’s grandfather. Once the donations already collected and the family all agreed, soon Noah was flown to Jakarta for surgery in Husada Hospital.
Noah’s disease was infact an abnormality due to the absence of the nerves in some parts of his large intestine so that his colon had less power to pump. Normally, human colons will pump faeces down to anus. Since some parts of Noah’s intestine did not do the pumping, his faeces became piling-up so his colon got bigger and could press the other inner organs. This was the main cause that made him feeling tight. He became restless and got cough with sputum then out-of-breath.
The surgery was done to cut-off and remove the abnormal colon, the part which had no nerves, then was joined  back connected to the normal colon which should pump faeces down. If it had not been removed, most probably, Noah’s colon would had a hole and had been torn due to piling-up of faeces as it could be clogged-up. Suppose this happened, it might cause some infections.
On 27th October 2016, Noah underwent a surgical operation for approximately 2 hours time. During the process, the doctors had to cut-off Noah’s colon as long as 75 cm. So now, Noah’s abdomen became deflated. As boys at his age by nature, Noah liked eating. Even when still in the treatment and nursing upon the surgery, he had asked for some ice-cream.
Noah’s recovery progressed very well. A week later, he was totally recovered and ate his food ravenously. Even he had some fun doing a city-tour around Jakarta with his mother and grandfather accompanied by the doctorSHARE’s volunteers. Finally, Noah was permitted to leave the hospital and went back to his home-village in Kei on 18th November 2016, about three weeks after his surgery.
“I am so grateful to doctorSHARE and all the persons involved who have helped Noah so much. I could only express my deepest gratitude as I am not able to repay all the kindness that has been given to Noah”, said Martha, Noah’s mother. She was anxious to see soon his son carrying-on his normal daily activities.
Written by: Abdul Basith Bardan
Translated by: Bagus Indarto