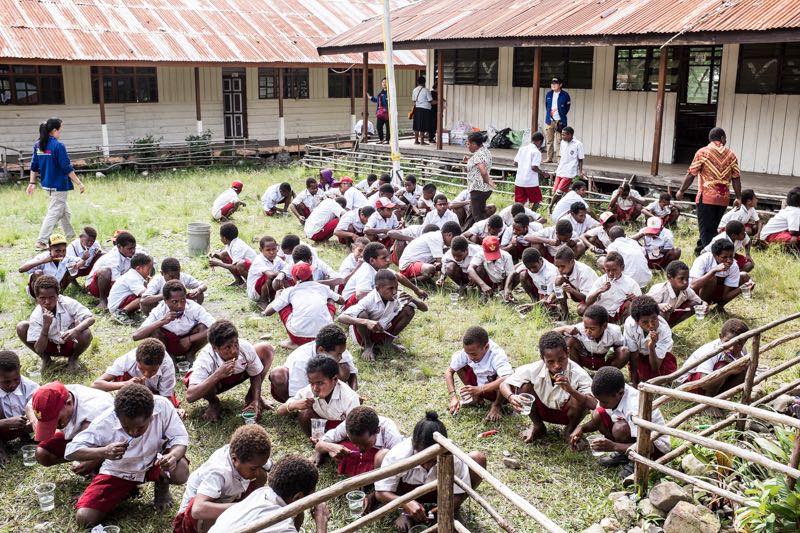 When we talk about providing education services in areas that have been neglected for decades, we are talking about areas that have lagged behind in basic infrastructure development. These areas are generally located in the outermost regions of Indonesia. Often we educate them through a “top-down” development approach.

At this point, we need to pause and reflect on this approach in order to provide appropriate education services.

Applying the education system through a centralized approach that focuses on an urban approach that has proven to be applicable to the residents of big cities and their surroundings, has ignored the fact that not everyone lives in big cities.

Is it possible to deliver education using a different approach, one that takes into account the population of the destination area?

One example is education services for people living in the mountainous region of Papua, an area where access to basic education and health is scarce. Does the method of education for them need to take into account the economic conditions and social challenges that Papuans have to face? It is evident to compare the living situation of Papuans with the urban population in Indonesia, for example the population living in Java Island.

Or should standardized education programs be designed based on a national curriculum that applies to all parts of Indonesia?

These questions need to be asked and answered when designing education methods to be adapted by people living in remote areas of Indonesia. This process will not only provide the population with specific skills and knowledge according to the program design, but will also change their perspective on life. Contrary to what many people believe, this can be disastrous, both for them and their immediate environment.

But after completing their studies, a large number of these educated young people find it difficult to find work or to apply the knowledge they have gained to develop their area. Maria (22 years old) is an example of a resident who has to deal with this situation.

“I just finished studying an IT program at a university in Bandung, West Java. But upon returning to Hitadipa, the only job available was helping my parents in the fields. Even in Sugapa – where the local government is looking for highly educated young people to fill job vacancies – the competition for jobs is so high that I’m not sure I’ll get a job there.”

On the one hand, consideration needs to be given to the method of providing education services. On the other hand, the content of education also needs to be considered. If the approach used is a standardized method determined by policymakers with a distorted perception of education through the lens of urban Jakarta residents, education will never be appropriate for people living in remote locations, for example in rural Papua.

Papuans are currently educated with methods that allow them to adapt to most other Indonesians, which the central government considers more modern and more appropriate for 21st century society.

Yet, when educating people living in remote Indonesian locations such as Papua, the basic question is: Who and what is the purpose of education for them? Are their interests and needs prioritized? Or are they only being educated to adapt to a basically Javanese-centric Indonesian identity, and losing their own identity in the education process as a result?

Considering the limitations of basic infrastructure in many parts of Papua, this kind of systematic imposition of “social upgrading” denies the basic purpose of guaranteeing education services and systems.

Remote area communities will not be able to take full advantage of the standardized urban-based education they receive, solely due to the fact that they do not live in a modern urban environment.

A common solution taken by remote area residents to overcome this issue is to move out of the area where they live and go “merantau”. This has become a common endeavor for residents outside of Java to pursue happiness, which translates as “traveling to another island in search of a better life.”

What good is a person’s education if the knowledge and skills they acquire cannot be applied in their homeland?

They also can’t expect to get job opportunities in their neighborhoods because employment opportunities are so scarce. Their hard-earned education is not useful for themselves or for developing their region.

The situation is even worse because they are not taught about how to apply skills and knowledge in the context of social issues facing local communities. Education for them becomes nothing more than a method to participate in an established system based on urban and developing regions.

In addition, such education can undermine a community’s cultural identity. Efforts to mitigate the negative impacts of this development are very insignificant. Decision-makers often only design programs such as ‘local content’ where students are required to learn the local language and occasionally learn traditional musical instruments. The programs designed rarely refer to the fundamental social issues that peripheral communities face on a daily basis.

Assuming that educating people in peripheral areas is absolutely necessary and desirable, it must be taken into account that the issues they face on a daily basis may be more complex than those faced by urban communities.

Finally, the form of education that should be provided should also refer to local issues. If local people are to be educated, the locality of education must be at the center of attention when designing programs.