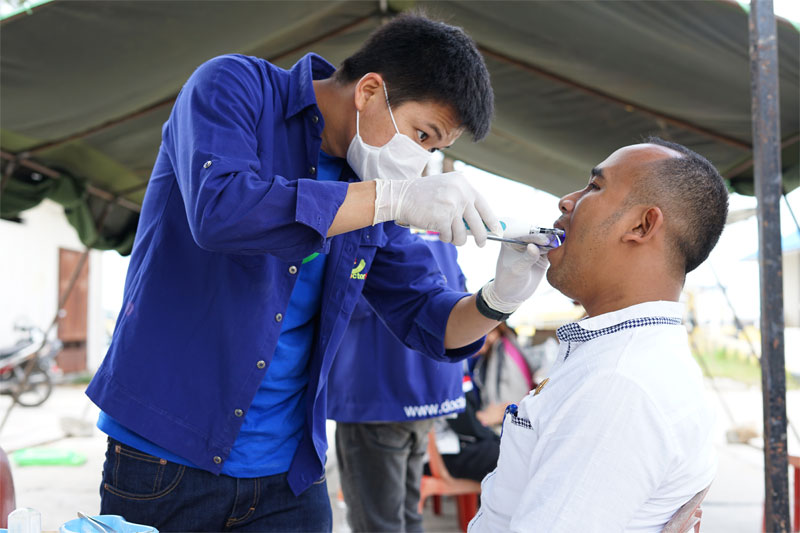 In 2017, RSA Nusa Waluya I conducted its first medical service in Natuna Regency, Riau Islands. This medical service was carried out in two places alternately, namely Ranai City and Pulau Tiga District. The activity took place from July 25 to August 1, 2017.

No less than 207 patients were treated at RSA Nusa Waluya I. The patients were divided into the categories of treatment center 110 patients, minor surgery 28 patients, major surgery 15 patients, and dental examination 54 patients. Dental check-up service is a new service in doctorSHARE’s series of medical services so far. Actions performed related to dental services are tooth extraction, tooth filling, and consultation.

The doctorSHARE team arrived in Ranai on Tuesday (25/7) afternoon. The following day, the team opened the medical center to perform general treatments and screening for major and minor surgical patients.

Most of the patients came from the three main islands in Pulau Tiga, namely Sabang Mawang, Tanjung Batang, and Teluk Labuh. Not only that, doctorSHARE also divided three teams to come to do initial checks (screening) and treatment at residents’ homes on each of these islands.

“We divide three teams to pick up the ball to the houses,” said the Field Coordinator of doctorSHARE Medical Services in Natuna Regency, Susanto.

The residents themselves felt greatly helped by the presence of the doctorSHARE team in Natuna Regency. Suradi (46), for example, felt greatly helped by the dental and circumcision services provided. According to him, all this time, circumcision and dental services can indeed be done at local health facilities, but Mr. Suradi feels heavy with the costs that must be incurred.