Heartfelt Chants in the Mountains 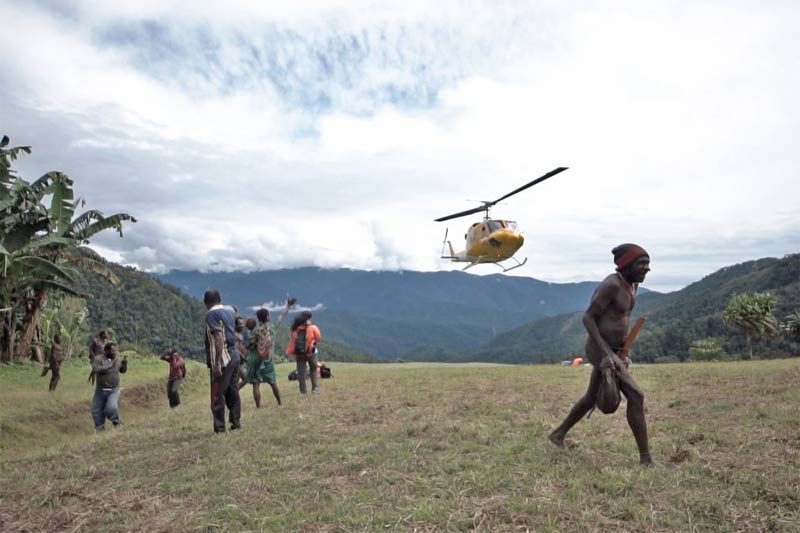 The Flying Doctor Team’s Journey in the Mountains of Papua

As the team members began to disembark from the helicopter one by one, the man quickly introduced himself. The man was Nanias, the tribal chief of Matadi Village, Biandoga District, Intan Jaya Regency, Papua. After introducing himself, Nanias instructed the youth and children to help move the team’s luggage to a church. The children were very happy to welcome the foreign guests.

Besides Matadi, there are nine villages in Biandoga District: Etamani, Bominatadi, Mayapo, Dimpa, Didiwoi, Baidotadi, Lempabiru, Dabuga, and Wadambabutu. Matadi Village was chosen as the location for the Flying Doctor medical service. The existence of a flat and airy place for helicopter landing was the reason why the team chose Matadi Village.

Assisted by a translator, the team explained the purpose of their arrival to the village officials. Actually, the news of the team’s arrival and medical service activities had been spread to all villages. With the help of the local government, the information reached the community a few days before the team arrived. This was done so that people who needed health services could come to Matadi.

The first day in Matadi was spent preparing for the next day’s health services. After everything was ready, the team used their free time to walk around the village. The team met the community while celebrating the peeling of the Red Fruit that had been buried in the ground for about a year.

As the team began to mingle with the community, they suddenly burst into song. The team was amused by the singing, even though they did not know what it meant. As time went on, the singing slowly became slower and the voice trembled. Nanias and Didiwoi village chief Timothy were seen shedding tears. All the team members began to wonder about the singing.

When the team asked the community, no one understood because they didn’t speak Indonesian. The translator we brought was from the Moni tribe, while the song contained the language spoken by the people of Biandoga District, the Walani language. One of the team members from Intan Jaya, Abniel, explained that the song is titled Menetawa Emo i iaia Waeo, which means Behind the Mountain There is No Progress.

“In general, the community said honest things about the state of their village, and I was very touched,” Abniel said.

Abniel explained that the meaning of the song is the community’s astonishment at being visited by guests from afar. All this time, the community thought of themselves as orphans and were not cared for. Through the singing, the community also asked why they came all the way here? To this village in the mountains of Papua? Here there is only grass, rocks and wood.

It was heartwarming to see the people crying. On this occasion, we really felt that we were taught a lot by the people in the mountains of Papua. The songs presented are a form of wailing, whining, and even screaming that cannot penetrate the rows of hills around where they live.

It is very rare for outsiders to come to Biandoga District, even by fellow residents of Intan Jaya Regency. The only access to Biandoga is by helicopter. There is no road access and no airstrip to land pioneer aircraft. If you want to walk to Biandoga, it takes about two weeks from Nabire.

Long before the team left for Biandoga, the Chairman of the Intan Jaya Regency DPRD, Marten Tipagau, explained the condition of Matadi Village which is far from access to health. Again, because there is no access to get there. Marten admitted that it was also difficult for the local government to reach the area.

“Biandoga District is very difficult to access transportation, even by us, the local government,” said Marten.

If you look around the village, not a single permanent building stands. Matadi Village has one wooden church building with a dirt floor. The rest are honai-honai owned by residents with one bathroom covered in leaves. There is no electricity, let alone cell phone signal. Public toilets are made independently by the community, with leaf walls and a hole to collect feces.

The people of Matadi Village give birth to their children independently. Some of the mothers admitted that they only waited beside the Honai. A resident of Matadi, Timotius Galipa demonstrates how women in his village give birth. However, this is a heartbreaking phenomenon. Not only for the mother who gave birth, but for this country.