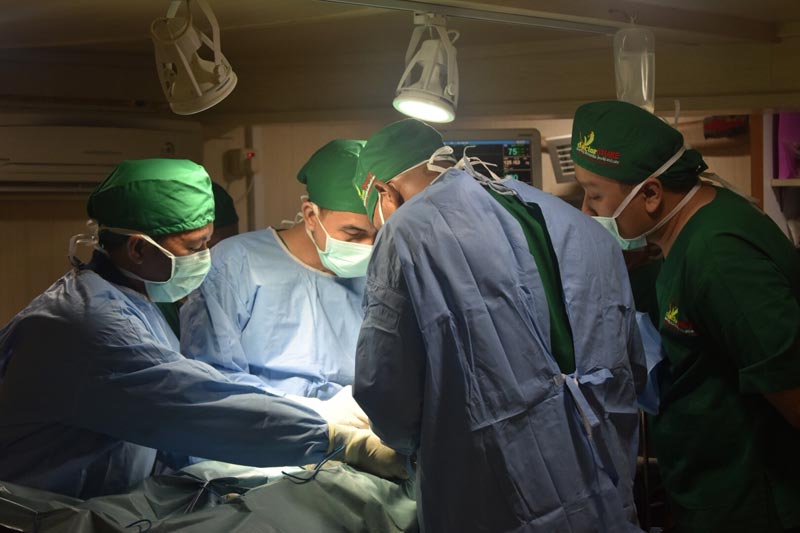 Usman Sehe admitted that he was nervous when the doctorSHARE Medical Services team was about to examine him. Fear often arises when he is about to be examined by a doctor. Before being examined, Usman was seen pacing around the dock where RSA dr. Lie Dharmawan docked. Occasionally he looked inside through the ship’s small door. As if to see what was going on inside the floating hospital.

Usman’s name was on the list of major surgery patients during doctorSHARE’s Medical Service in Wayabula Village, West South Morotai Sub-District, Morotai Regency, North Maluku. The 55-year-old man is not a native of Wayabula. Accompanied by his wife, Usman came from the capital of Morotai Regency, Daruba. The news of the free surgery service was received from his daughter, a midwife at the Wayabula Health Center.

The father of four children often complained of pain in the lower part of his stomach. The pain became worse when he worked in the garden. The first time he complained was in 2014. Unable to bear the pain, Usman rushed to have his health checked at the hospital. Usman was diagnosed with Hernia and required surgery.

When he was diagnosed with Hernia, Usman did not immediately follow the advice to undergo surgery. Although Usman finally underwent surgery in 2017. DoctorSHARE’s team of major surgery doctors asked why he didn’t go ahead with the surgery. Usman’s only reason was fear of surgery. “At that time I was still afraid of being operated on at the hospital, I was not ready,” he said.

Usman is not the only patient who is afraid of medical examinations. During the doctorSHARE team’s time in Wayabula, many people did not come when they wanted to be operated on, whether major or minor surgery. Not a few people were reluctant to come for medical check-ups in the first place. The head of Wayabula Health Center, Wayyama Wabula confirmed the condition of the community.

“They say they are afraid. I don’t know what kind of fear I have. Most of them are afraid to seek medical treatment,” said Wayyama when met at the Wayabula Health Center.

Wayyama complained about this condition, many times the community was persuaded but it was still difficult. According to him, the community will only go for treatment when it is already in a very bad condition. If the disease is considered severe, only then will people go for a check-up. “Only when they are on the verge of death do they want to,” Wayyama added.

The same thing was also expressed by a surgeon at Morotai Regional Hospital, Dr. Agung Sindu Pranoto, SpB. According to him, the challenge is greater when persuading people to undergo surgery. Fear is often the main reason for delaying or even refusing. The incident almost happened to people in Morotai Regency.

“If there are cases that need surgery, even though the medical team has educated for surgery, the community tends to refuse. Usually, patients come in a severe condition, and only then do they want surgery,” said Dr. Agung.

According to Dr. Agung, the Morotai community’s interest in surgery is still lacking. In addition to the education factor, the habit factor regarding health is also still strong. Not a few people still believe in traditional medicine. This belief has been passed down from generation to generation until now. So that some villages in Morotai still uphold ancestral beliefs.

The shaman is a figure trusted by the community to cure diseases, even help labor during childbirth. The community believes that as long as it is still cured at the shaman, then there is no need to go to the doctor. Traditional medicines or concoctions are recommended to patients in an effort to heal.

The head of Wayabula Village, Alimin Mansur, always reminds the community to seek treatment at the Puskesmas. He forbids every citizen to go to a traditional healer, especially in matters of childbirth. Every resident who wants to give birth must go to the village midwife. Often the number of home births with the help of traditional healers continues to decline.

“I emphasize to the community not to give birth at home, if there is an incident of infant death or even the mother how. So you have to ask for help from the village midwife,” said Alimin.

The only way to overcome people’s fear of medical treatment, according to Dr. Agung, is to provide detailed information even to the worst risks. A doctor’s job, besides helping to heal, is to educate the community. People’s lack of knowledge about health is very influential.

“Only in this way will people understand and change their mindset. In addition, we also dare to convince that this is a safe action, if carried out in accordance with the right standard procedures,” concluded Dr. Agung.