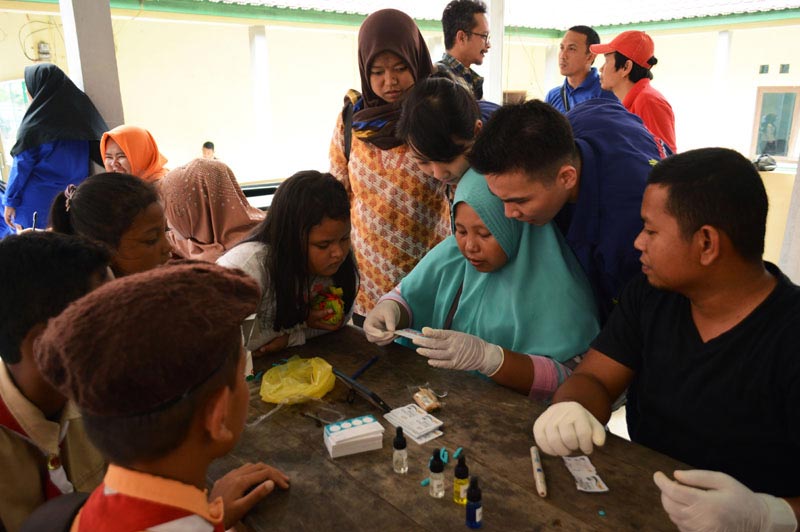 Initially, there were 16 volunteers who would participate. Due to bad weather, the plane carrying six volunteers from Tanjung Pinang could not land in Anambas. Although the number of teams was reduced, the activities continued according to the original plan. The team was assisted by a number of medical personnel from the Anambas Islands Regency Health Office.

The series of medical service activities in Anambas included health counseling, training of local medical personnel, general medicine, and minor surgery. Activities were carried out on two different islands, Siantan Island and Matak Island. Upon arrival in Anambas, the team was welcomed by the Regent of Anambas Islands, Abdul Haris and his staff. He expressed his hope for the smooth running of the activities when welcoming the doctorSHARE and Star Energy team.

“I hope this activity runs smoothly and sustainably. Hopefully the Anambas community can take advantage of this activity,” Abdul said.
After the welcoming ceremony, the team moved to Tarempa Community Health Center on Siantan Island. The team provided general medical treatment on the first day (8/12). The next day, the team continued the general treatment plus minor surgery. The total number of patients at the Tarempa Health Center was 70 patients for general treatment and 17 patients for minor surgery.

“There were about 50 participants. There were 30 participants from alert village and posyandu cadres, the rest were PKK cadres from villages and sub-districts,” said Sofiani Srilagogo, Kesling Kesjaor Staff of Anambas Health Office.

After the health counseling, the activity continued with training for local medical personnel. The training material was about blood type examination. After receiving the theory, participants were asked to apply it to students in the area. After the training, dozens of junior and senior high school students in South Siantan Subdistrict gathered to wait for blood type checks.

“We hope that doctorSHARE’s social service activities in Tarempa and Palmatak will benefit the surrounding communities, especially in improving the quality of public health. This social service program is clear evidence of Star Energy’s commitment to implementing CSR programs in the Anambas Islands Regency operation area,” said Yudi.