Evolution of the “Bahenol”: Cement Carrier to Hospital 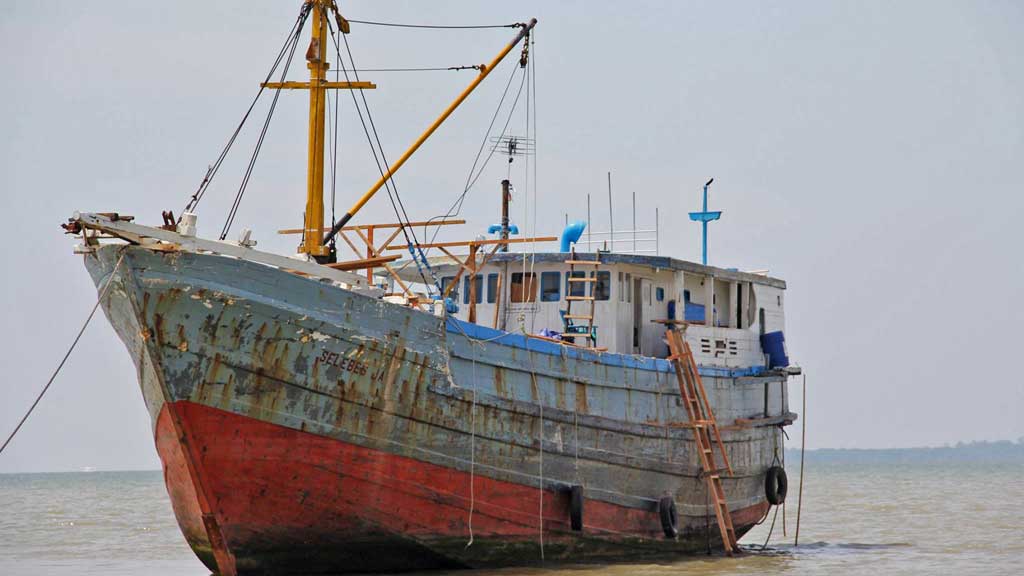 A cement carrier named Selebes Jaya arrived at Sunda Kelapa Port, Jakarta on March 13, 2012. The wooden pinisi-type ship sailed from Palembang to Jakarta. When viewed from a distance, the ship was in a shabby condition. Paint peeling off here and there, at first glance it looks like the ship is not well maintained. When it arrived in Jakarta, Selebes Jaya was already four years old.

Selebes Jaya was the forerunner of the first private floating hospital in Indonesia. This pinisi ship was purchased by doctorSHARE in 2012 in installments. Shortly after arriving in Jakarta, Selebes Jaya was moved to Muara Baru Harbor. The doctorSHARE team visited the ship, saw the state of the ship which needed a lot of repairs, thought about how to turn it into a hospital.

Slowly but surely, plans began to be drawn up one by one. A master plan for the renovation into a floating hospital was drawn up. Other teams moved to make proposals to be presented to various parties. The goal was to share a vision of how the ship could one day become an alternative health service in various parts of Indonesia.

The technical understanding of the ship at that time was still very minimal. It was not easy to convince others of an idea that had never existed before. With modest funds and strong determination, Selebes Jaya began to be renovated into a floating hospital. It was not an easy task to remodel a transport ship into a hospital. The process tested physical, mental and faith; it took time, energy and money too.

During the renovation process, Selebes Jaya was once stranded on the sand piles of Tanjung Burung. The bottom of the ship was sprayed to free the ship from the grip of the sand and towed with other ships. Feelings of pessimism and despair often arise when seeing the ship stranded. Encouragement and support continued to flow from all parties. After eight months of being stranded, Selebes Jaya was finally freed from the sands of Tanjung Burung.

The renovation process resumed, and every progress was recorded. One volunteer nicknamed the ship “Bahenol” because of its beauty and strength. During the renovation, the most significant changes were inside the hull. Spaces that had been planned earlier began to take shape. The appearance of the ship has not changed much, still looking shabby and messy.

The floating hospital was built for the needs of people in the islands, especially remote areas. Towards the completion of the renovation of the ship into a hospital, doctorSHARE plans to conduct a trial voyage before sailing on the high seas. The chosen location is Panggang Island, Seribu Islands as the first medical service location.

Intensive preparations were immediately made by the team. The team immediately conducted a survey, organized a schedule of activities, and communicated with various elements of government. In this first medical service, we plan to show the floating hospital for the first time to the public. This was not an easy task as there were no examples of how a simple floating hospital could operate.

On March 15, 2013, preparations for the first medical service were made with the volunteers. Their tired bodies were overcome with high spirits. Volunteers continued to lift, move, and organize boxes of medicine and medical equipment needed. Some other volunteers were busy sweeping and mopping the floor, making sure the ship was clean and organized.

Slowly the sun began to show itself, a sign that “Bahenol” had to leave Muara Baru Harbor and sail to the Thousand Islands. It took about 4.5 hours to arrive at Panggang Island Pier. Volunteers who participated in the trip began to leave the room when Panggang Island began to be seen in the distance. Meanwhile, many people were already waiting enthusiastically at the dock.

Emotion could not be contained, tears began to fall when the cement transport ship successfully sailed as a floating hospital. The hard work during the renovation process seemed to pay off when the ship started moving. After the ribbon-cutting procession, marking the inauguration of the floating hospital, the medical service activities began.

The types of medical services performed were major surgery, minor surgery, gynecological examination, general medicine, and health counseling for elementary school students on Panggang Island. This is the starting point for doctorSHARE to make history, working for communities across the country.