Contribution to the Nation 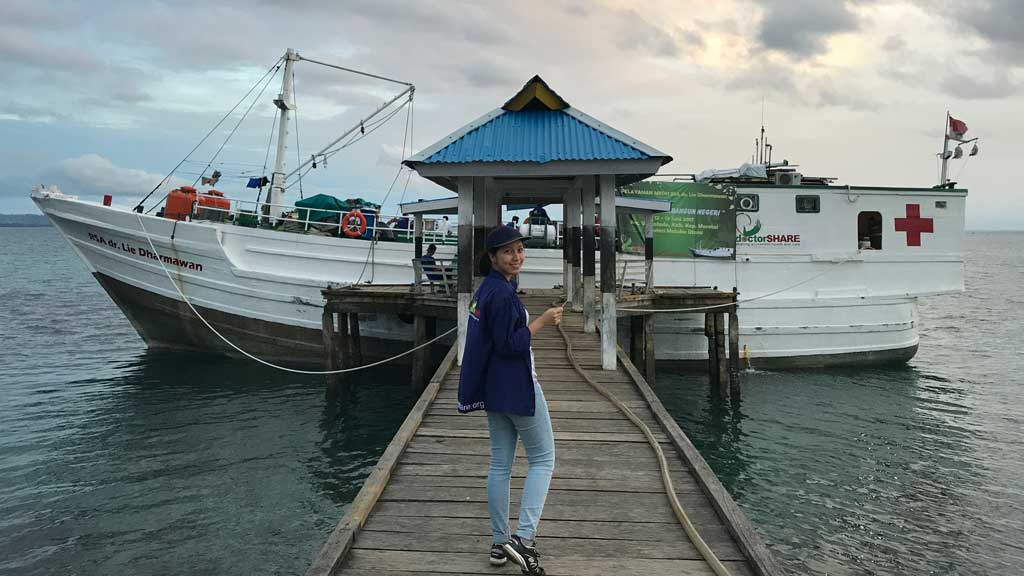 “I alone cannot change the world, but I can cast a stone across the waters to create many ripples” – Mother Teresa.

It was this quote that first took me deeper into doctorSHARE’s ministry that eventually changed my life paradigm as a volunteer. Introducing myself, I am Maltha Anatasha, someone who has always dreamed of getting a medical education and finally even though I didn’t become a doctor, I managed to become a medical technologist who was painstakingly pursued in the land of kangaroos, Australia.

The story of the crazy doctor as Dr. Lie Dharmawan is actually familiar to my ears. This story has been very popular through the Kick Andy program that I accidentally watched. However, being a part of it honestly never crossed my mind. I thought Dr. Lie was too far to reach.

Until one day in November 2015, a good friend of mine introduced doctorSHARE’s third Floating Hospital (RSA) project which was expected to be launched in 2018. Well, the rest is history. I decided right then and there to help raise funds for the third RSA and it was one of the best decisions of my life.

One year into the journey of helping raise funds for the third RSA, our team leader, Julia Tan said “You have to go to the medical mission! Only then you can feel the difference and see the people we’ll serve in Maluku!” Because of the timing (I just happened to have moved jobs and was able to take a vacation) I decided to try to join this life-changing experience and joined doctorSHARE’s medical mission to Wayabula Village, Morotai, North Maluku.

Initially as a non-doctor I was quite worried that I wouldn’t be able to contribute anything, but I was completely wrong. All volunteer members without exception were very helpful in the medical service! During the medical service, I helped with the data collection of the patients, which was overwhelming for the doctors who had to focus on the surgical procedures. In addition, there were many things I saw in this service that I would never have gotten in Jakarta.

As a child born and raised in Jakarta and in a middle class family, life without gadgets and simplicity is very difficult. Plus as a woman I was raised to learn to have my own abilities, dream as high as I can and pursue my dreams even though I am a woman.

On the eastern side of Indonesia, I saw many women in the Morotai area who married early under 18 years old and even had children. You can imagine, we are only six hours apart by plane but can be raised in a very different way. It opened my eyes to the importance of education for women.

Not only the medical services brought by doctorSHARE, I see how much doctorSHARE still needs to contribute in remote areas of Indonesia and of course, I will never get tired of coming back and helping to make the necessary contributions.

Last but not least, there will never be a change if there is only one person working, but we can all start the change together to create our own ripples of change. Happy contributing to the nation!