The Story of Nurul and Where She Lives 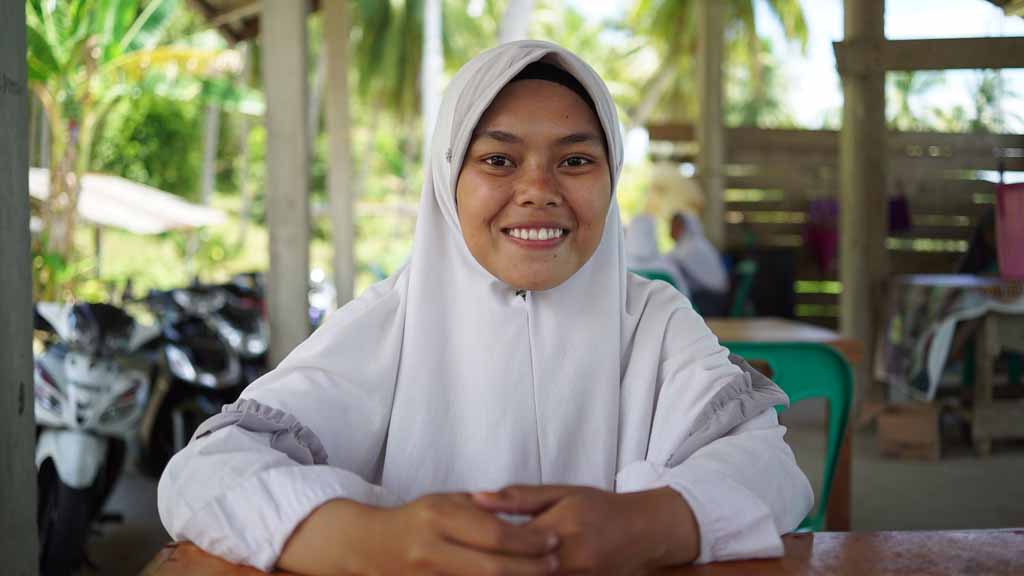 The roar of the pompong boat’s engine was heard loudly at the edge of the harbor. One by one, the students who were about to go to school boarded the boat, including Nurul Hasanah. Since junior high school until she graduated from high school, Nurul always went to school by pompong boat from Munjan Village to Nyamuk Village. After school hours, she would return home with a medium-sized boat that faithfully picked her up at the small harbor near the school.

Nurul and his peers who live in Munjan Village are used to going to and from school by pompong boat. This is because there is only one high school in East Siantan Sub-district, Anambas Regency, Riau Islands Province, namely SMA Negeri 1 Siantan Timur. The school building is located at the end of the village with a direct view of the ocean. The front yard is a white sandy beach with small coconut trees around it.

The sun is beginning to shine in the morning. A man wearing a striped collared shirt and a black hat is driving a pompong at the back. His right hand held the control to steer the propeller, while his left hand held the edge of the pompong. The man’s name was Abdul Wahab.

Nurul captured Abdul Wahab’s work in a photo. He captured him through a mirror, showing Abdul Wahab working as a pompong captain and the sun shining on him from behind. From the caption of the photo, Nurul wrote that the 54-year-old man has worked as a pompong captain since 2007 until now. The photo won Nurul the first prize in a photo competition held at his school.

“Previously, I didn’t think of taking photos using mirror reflections. At first, I was just trying to use a mirror I borrowed from a friend,” Nurul said. After the competition, Nurul was advised by her photography mentor, Agus Prasetiawan or Pak Tio, to upload her photos on Instagram.

“I first got into photography when Pak Tio came here, at that time there was a socialization of creative photography. I didn’t get first place, I was fourth. After that I tried it myself. When there was another competition, I participated and won first place,” said Nurul. She also said that initially she liked landscape objects such as beaches, but over time she also preferred human objects that had expressions.

Nurul wrote a folklore about the beginning of Munjan Village to participate in the history writing competition. From a community leader named Tarmizan, Nurul learned that the name Munjan comes from three words, Hari-Mau-Hujan, which is shortened to Munjan. In his historical paper that was included in the competition, Nurul told the story of three brothers, namely Wan Bun, Wan Bijan, and Wan Beras who came from what is now called Munjan Village.

When it was about to rain, Wan Bun suddenly disappeared in front of his two brothers. The two brothers searched for Wan Bun’s whereabouts, but never found him until they finally went home. Arriving home, the community suddenly came to tell them the news that Wan Bun would not return. He was on a mountain on which there was a large rock. Wan Bun’s disappearance coincided with a rainy day on the big rock and was later immortalized as a village name.