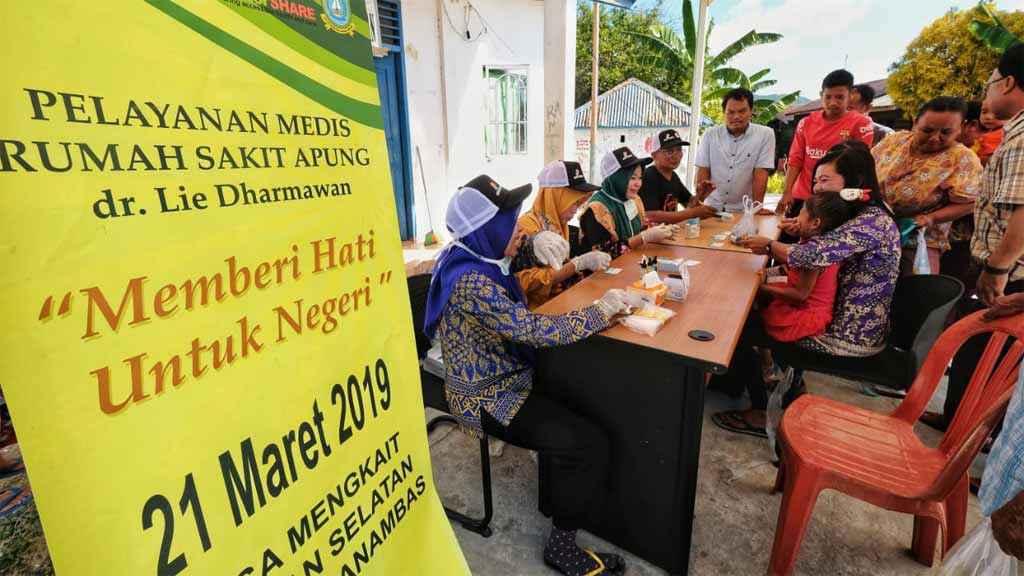 “On Mengkait Island, there are currently no nurses and midwives. That’s why we really want to go there. There we found four prospective patients for surgery. Initially, they only wanted medical treatment, but then we recommended surgery,” said Field Coordinator Dr. Christiani about the medical center on Mengkait Island. Of the four potential surgical patients, only two patients came to the RSA the next day.

“One of the two patients was a small child suffering from chronic appendicitis. After traveling three hours by pompong (boat) from Mengkait Island to Nyamuk Village, the patient was examined again and immediately operated on. You can imagine if his appendix ruptured, it would be a long and arduous journey to get adequate health facilities,” he adds.

In addition to Nyamuk Village, the doctorSHARE team also examined residents in Batu Belah Village and Munjan Village which are still in East Siantan Sub-district on different islands. From the examination, the doctorSHARE team found several patients who immediately refused when they knew they would be dissected. There were four prospective surgical patients from Munjan Village but only one person came and was operated on.

“Many are afraid to come to the hospital, they are worried about the cost and so on. Even though we have socialized that all treatment is free of charge. But it takes time to raise people’s awareness of the importance of health,” said Nyamuk Village Head, Safaruddin.

“The challenge is to change the mindset of patients who initially did not want to be operated on. Because maybe now they (patients) are still not complaining about their illness and can still do their activities as usual,” said Dr. Christiani about the challenges of medical services this time. According to her, the government’s socialization for medical services this time was also not optimal so that many people did not know.

According to Safaruddin, the arrival of the doctorSHARE team also inspired students to go to medical school. “Many school children ask me how to become a doctor. It also sensitizes the community to immediately seek treatment at the hospital,” Safruddin added about doctorSHARE’s arrival in Nyamuk Village, East Siantan District.