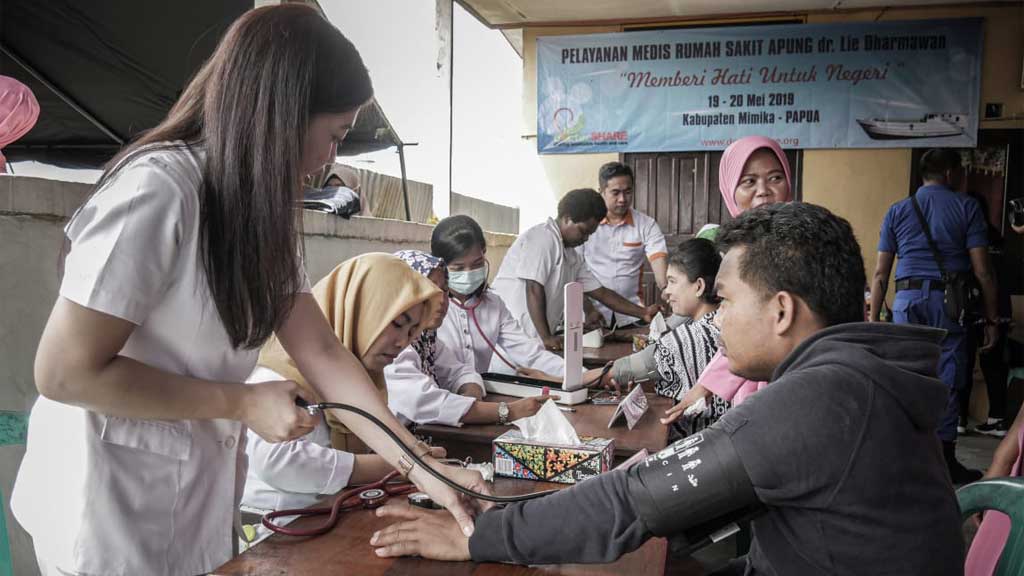 Floating Hospital (RSA) dr. Lie Dharmawan returned to serve the community in Asmat Regency, Papua on May 17-27, 2019. The RSA’s journey was constrained by weather and waves when heading to Timika so it had to take shelter first in Southwest Maluku. When the natural conditions improved, RSA resumed the voyage and arrived at Pomako Harbor, Timika on Saturday (5/18).

RSA’s arrival in Timika coincided with the arrival of a team of volunteers for medical services. The volunteer team was divided into two arrivals. The team that arrived on that day was the first team of 11 volunteers. It is planned that the first team will be dispatched first to Agats District, Asmat Regency to begin medical services. Warnings of bad weather and high waves again became an obstacle along with the issuance of a sailing ban.

The sea route is the only access to and from Asmat Regency, so it depends on natural conditions. Not wanting to waste time, the team immediately changed plans by carrying out medical services in Mimika Baru District, Mimika Regency on May 19-20, 2019. The enthusiasm of the community can be seen from the number of people who came for treatment. There were 400 general medicine patients and 47 minor surgery patients treated by the team of volunteers.

After the weather and waves were declared safe for sailing, the first team started the sea journey on Tuesday (5/21) at 07:30 WIT. The second team of 12 volunteers arrived in Timika on the same day, two hours after the first team departed. The team of volunteers departed using a speed boat belonging to the Papua Police with a travel time of about five hours.

Upon arrival in Asmat Regency, the team immediately prepared medicines and medical equipment to begin medical services. Medical services in Asmat Regency were carried out on May 22-24, 2019, services provided included general medicine, minor surgery, and major surgery at RSA Dr. Lie Dharmawan. Patients who came not only from Agats District which is close to the RSA berth location, there were also patients from Siret District, Akat District, and Ats District.

The team of volunteers took the sea route back to Timika after the medical services. Unlike the departure, the team returned to Timika using RSA Dr. Lie Dharmawan and traveled by sea for 17 hours. Arriving in Timika, the team prepared to return to their respective home areas.