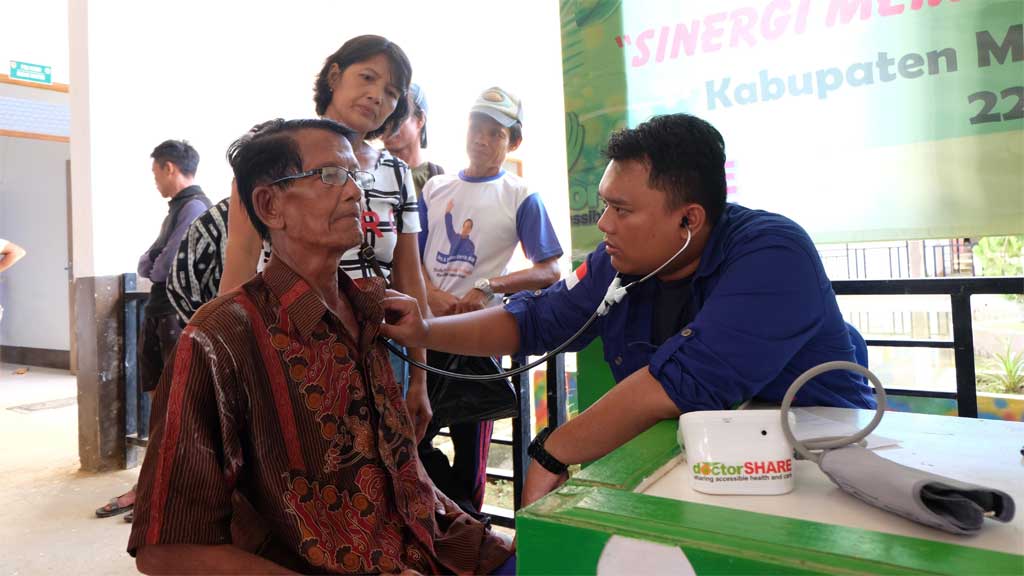 Upon arrival in Menukung on Tuesday (23/7) afternoon, the team rushed to the Menukung Health Center because many people were waiting to have their health checked. The initial plan was to start the medical service in the morning, but due to travel difficulties, the medical service only started in the afternoon.

“The team’s journey was hampered because the plane was delayed until the next day. Finally, the start of medical services was delayed and the community was waiting,” said Flying Doctors Program Coordinator, Devrila M. Indra.

The people who had gathered were then directed to register and wait for their turn for examination. The types of services provided include general medicine and minor surgery. Minor surgery patients are conditioned to go to the room used for screening and surgery. The large number of patients on the first day overwhelmed the team, and the medical team from Menukung Health Center helped during the medical services.

According to the doctor in charge of the Menukung Health Center, Dr. Gerry, the community was very enthusiastic because it had been informed in advance to all villages in Menukung District. Even people from the most distant villages came to have their health checked.

“The community has received information that there is free medical treatment by doctors from Jakarta. So people from distant villages have also traveled to Menukung to prepare for treatment,” said Dr. Gerry.

Many people walk from their homes to the Menukung Community Health Center for hours. The farthest village in Menukung can be reached in about three to four hours on foot. For some people who have motorized vehicles, of course, the travel time is shorter. Occasionally a pick-up truck is seen bringing people for treatment.

“That’s usually people from far villages, coincidentally someone has a pickup truck for business and is used to take people to the Puskesmas,” added Dr. Gerry.

During the four days the Flying Doctors team service was open, the number of patients attending each day was almost not much different. The first two days required the team to serve until sunset due to the large number of people attending. General medicine served 636 patients with the top five diseases including Hypertension, ARI, Dyspepsia, Arthritis, and Fybromyalgia. Meanwhile, the minor surgery service successfully operated on 59 patients with the most common cases being Lipoma, Ganglion, and Atheroma Cyst.

“On behalf of the government and the people of Melawi Regency and especially Menukung District, I appreciate and thank you for organizing this medical service. I hope this cooperation can be continued to meet the health needs of the community, especially people who are far from the district center,” said Dr. Ahmad.