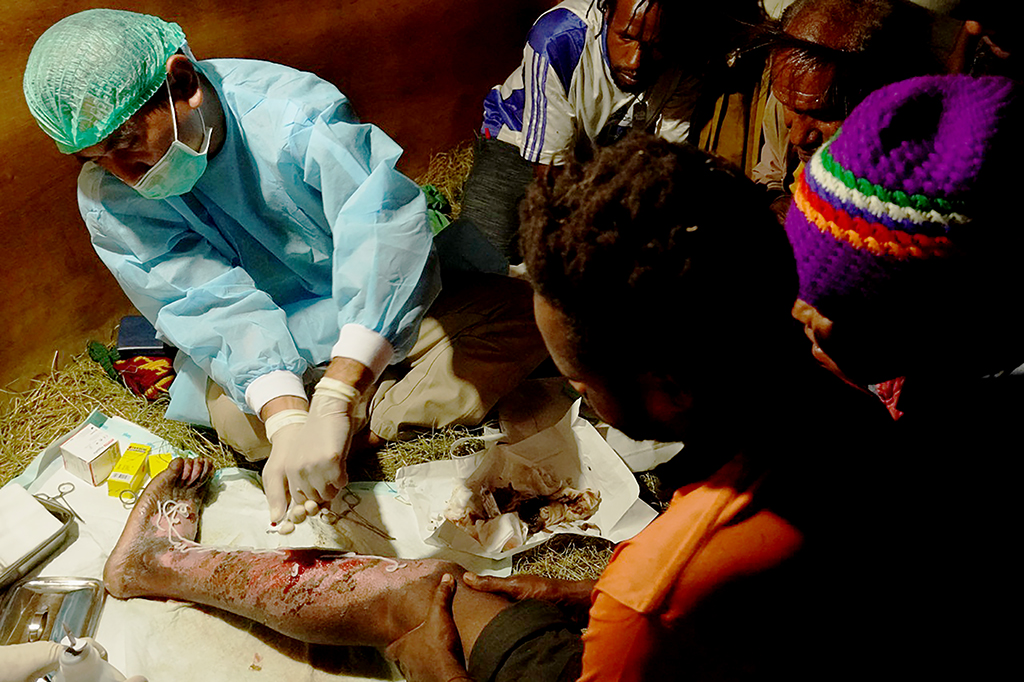 Liben! That’s the name that stuck in our memory when we returned from Papua in early October 2021.

At that time, the doctorSHARE team through the Flying Doctor program, which is a free medical service program for people in mountainous areas (which are not reached by floating hospitals) provided medical services in Wamena, Puncak Jaya Regency for approximately one week.

On the last day the team conducted treatment, surgery, and home visits to residents in Sinakma Village. A village located approximately 4 km from Wamena.

Sinakma residents live side by side with refugees from Nduga. These refugees left Nduga for security reasons after the bloody events in Nduga several years ago.

Back to Liben. After devouring boiled corn dipped in chili sauce, it was time for a home visit. A mother pleaded with us to come to her parents’ house first.

Our team set off. It took about 15 minutes to arrive at a Honai (typical Papuan house).

We were invited to enter (we had to duck because it was relatively short) and were greeted by about 8 people inside the house. Once inside we immediately smelled an unpleasant aroma. Later we realized that apart from the smoke from the stove inside the house with no ventilation, the smell came from Liben’s leg.

“Slow down a little. He’s in a lot of pain,” admonished a man, with a feather ornament around his head. We later learned it was the local chief, and Liben’s father.

The situation was a little tense, with the father, supported by other family members, insisting that she be given both medicine and an injection.

Meanwhile, medically, the dead skin that had begun to decompose all over Liben’s leg had to be removed immediately. If left untreated, the leg would become severely infected, and the worst risk would be amputation.

In a tough negotiation, Mr. Hendra and Villa as coordinators of the doctorSHARE Team utilized their years of experience interacting with Papuans.

The chief, Liben and other family members were persuaded to allow us to clean the wound, and then treat it.

“Sir… If we don’t remove the dead skin, this little boy’s leg will rot,” explained Pak Hendra. “If the dead skin comes out, then new skin can grow later,” Mr. Hendra added reassuringly.

Thanks be to God! After about an hour, the wound was cleaned, salve applied and bandaged, even though Liben was screaming and the rest of the house was panicking.

“Thank you doctor for coming all the way to treat my son’s leg,” said the chief gently with teary eyes.

“Father, I have no money! I don’t have any wealth that I can share with your family,” Mr. Hendra replied shakily. “All I have is a few skills, and that’s what I do for Liben,” Mr. Hendra added.

“I love Papua, because everyone here is my brother,” said Mr. Hendra while wiping tears from his cheeks.