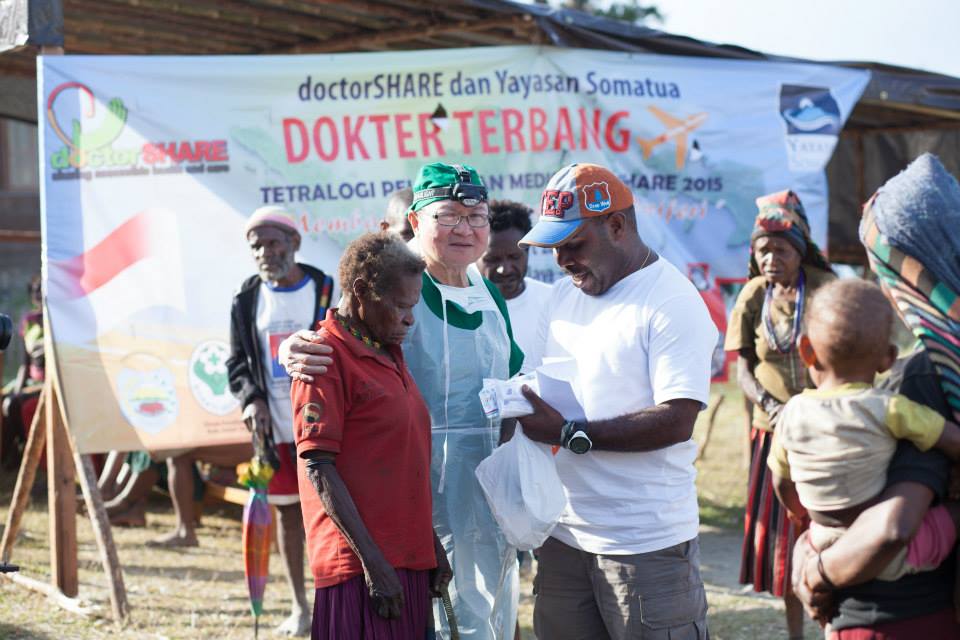 We have often heard the phrase “Healthy People, Strong Country”. A few years ago, this phrase even became the slogan of our national health day. This phrase underscores how important people’s health is to the progress of a nation.

We agree with it and therefore, we strive to make our people healthy. We have launched Healthy Indonesia 2010 and participated in the MDG’s 2015, but have not managed to meet the targets.

We don’t want to regret our failure or look for who to blame, but let’s examine the lessons we can learn from our experience and ask ourselves: “what role can I play?” I am sure that every one of us wants a strong Indonesia.

The definition of health itself is not uniform and has been the subject of expert discussion for decades. The WHO defines healthy as a state of being free from disease and physical disability, spiritually healthy, free from fear and socially independent of others.

As such, this individual has enough time to rest, interact socially, freely develop their talents and knowledge, and earn an adequate income. This definition is generally accepted by society at large. But for us, this ideal goal is still far from reach.

What indicators can we use as benchmarks to measure the progress of a country’s medical services?

The eight points of the MDG’s targets can be used as a reference because five of them are directly related to health. We can also look at Indonesia’s ranking in the world in the Human Development Index (HDI). HDI calculates life expectancy, average years of education and social life of a nation.

In 2013, Indonesia ranked 111th out of 182 countries surveyed. Over the years, Indonesia has always maintained a “middle class” position. Among ASEAN countries, we are below Singapore, Brunei Darussalam, Malaysia, Thailand and the Philippines.

To make meaningful progress, we must learn from past experiences, draw conclusions and move quickly to correct shortcomings. For that, we need accurate statistics.

On the other hand, accurate statistics that can be read correctly are a rare commodity for us. For example, the number of doctors registered with the Indonesian Medical Council (KKI) on September 9, 2015 was 107,368: a fantastic number.

However, IDI and the Ministry of Health have other statistics that show the number of doctors far below the KKI figure. This happens because of different ways of collecting samples with different registration criteria.

What we need is data on those who actually work clinically as doctors, not those who have registered as doctors, then started a family, had children, then worked as housewives.

Not counting those who pursued careers in the pharmaceutical industry, bureaucrats, and so on. Data on the number of doctors who retire, get sick, die, or no longer practice is still dark. We really need accurate data, and to know how to read and assess it.

For example, the September 9, 2015 KKI statistics say that for around 250 million Indonesians, there are almost 108,000 doctors. Mathematically, we don’t look too bad. An Indonesian doctor serves about 1,400 people. Although not optimal, Indonesia has “put on a face”.

But if we want to be honest and really determined to improve the medical service system, we must ask critically. Of the nearly 108,000 doctors registered with KKI, how many are actively practicing as doctors?

Another statistic is that a district has 8 specialists (one each for surgery, pediatrics, obstetrics, internal medicine, radiology, anesthesia, laboratory and anatomical pathology) for a population of 10,000. At first glance, it seems “wow! Great!” This statistic shows that for every 1,250 residents, there is a specialist doctor serving them.

Another major problem is the uneven distribution of health workers and other medical support facilities such as laboratories and hospitals.

In western Indonesia, such as Java, Sumatra and Bali, the distribution is not bad. But the further east we go, the worse the distribution of doctors and other medical support facilities. This is not to mention the frequent changes in weather, the vast area with a small population, and the minimal or no infrastructure.

My personal experience when I was involved in medical services in Gagemba Village, Intan Jaya Regency, Central Mountains of Papua Province, in July 2015, exemplifies how difficult it is for us to realize a healthy Indonesia.

According to the community leaders (through translators), since Indonesian independence there has never been a team of doctors who came to Gagemba. We at doctorSHARE were the first to come and provide medical assistance to the community.

When the service closed at 4pm WIT (there was no service at night because there was no lighting), myself and Sdri. Sylvie Tanaga walked out of the service arena, just wanting to walk around for 15-20 minutes. The quarter of an hour we had allotted ended up being a worrying and physical struggle in the middle of the forest with no roads and no lighting for about 5-6 hours.

We couldn’t find our way home even though we had only walked straight when we left and not for long. The Rp 2 million in our pockets was useless as we couldn’t hire a taxi or any other vehicle in the middle of the forest.

Smartphones were also powerless to connect us with other team members who were trying to find us. Our feet were our only reliable means of transportation up and down the mountain in the darkness of the night and the cold air (about 2,200 meters above sea level).

Tarzan-style shouting was a useful communication system and the only way. Fortunately, we met a local who, despite not understanding Indonesian, took us to a honai (Papuan house).

From the honai, we were escorted to the next honai up and down the mountain until we finally met a man who understood Indonesian and took us home.

Is it true that our population increases by less than 1.5% per year? Or is it around 2%? I think 2% is more realistic.

For local people, “family planning” is a foreign term. Many mothers in their 30s have already given birth to six to seven children or more. Although the infant/toddler mortality rate is very high, the motto “2 children are enough” and “a boy or a girl is the same” are clearly not being met.

The close interval between one birth and the next affects the quality of life of both mothers and their babies. Under these conditions, how can they meet the WHO definition of healthy?

Currently, Indonesia graduates around 6,000 new doctors every year. Is this number sufficient to serve our growing population? If all those who graduate practice as doctors, no one retires and dies, mathematically we are very likely to maintain the status quo of 1:1,400. However, it is still a long way from achieving a ratio of 1:250 like developed countries.

The situation suddenly changed when JKN (National Health Insurance) and BPJS (Social Security Organizing Agency) came into effect on January 1, 2014. Indonesia, which was previously known as a country without social security, became a country that provided social health insurance for 250 million of its people in one day.

Unfortunately, this sudden change was made without adequate preparation.

Jakarta, with the best infrastructure nationally, was overwhelmed by the surge in patients. The number of existing doctors/hospitals and health centers was not enough to accommodate the interest and treatment needs of those who needed help. The DKI Regional Government also massively increased capacity.

The increase in capacity did not answer the needs. Swearing was directed at the medical service providers. Is the problem that simple? Obviously not. Or is the BPJS system bad? No, it’s not perfect. We still need time to fix everything. It took decades for developed countries to reach the current standard. BPJS Kesehatan is only 1.5 years old.

As an illustration, someone who wants to treat acne queues at a skin polyclinic to get treatment from a skin specialist. When he had to wait a long time due to the large number of patients, the standard grumbling ensued: “I am not being served because I use BPJS!” The socialization from the authorities to use primary care (puskesmas) first seems to have fallen on deaf ears.

People forget that there are currently 175 million people who have been registered as members of BPJS Kesehatan and they must be served. In comparison, Germany’s population is around 80 million with excellent infrastructure and decades of experience.

The budget allocated by the government is still not enough to cover BPJS expenses. Not to mention the misconception that all costs at the hospital without any restrictions are covered by BPJS.

Medical in America is roughly the same as our BPJS Health PBI. Those with low/no income receive health care assistance from the government under certain conditions according to standardized procedures.

Recently released statistics indicate that about 30% of BPJS members – Non PBI (who have to pay dues every month), do not fulfill their obligations. When they are sick, they pay, but after they leave the hospital, they forget their obligations. Such moral hazard is certainly detrimental to our togetherness.

Accusation after accusation against doctors, as if doctors don’t care about the deterioration of our health system, are unwilling to be sent to the regions, and so on. I think it’s really unfair.

How many doctor’s parents would voluntarily send their children to serve several years in remote areas with all the limitations? How many investors are willing to live in remote areas and invest in opening up the isolation of an area?

We don’t want to blame each other, but try asking “what can I participate in Indonesia’s development?”

doctorSHARE has about 250 members, all of whom are young (except me). We are trying to fulfill a need that arises because of the stark disparity between Western and Eastern Indonesia. We have sailed from the West to the East.

I am sure we all want to see a strong Indonesia because its people are healthy. (***)