Now “The Papaya” Has Gone 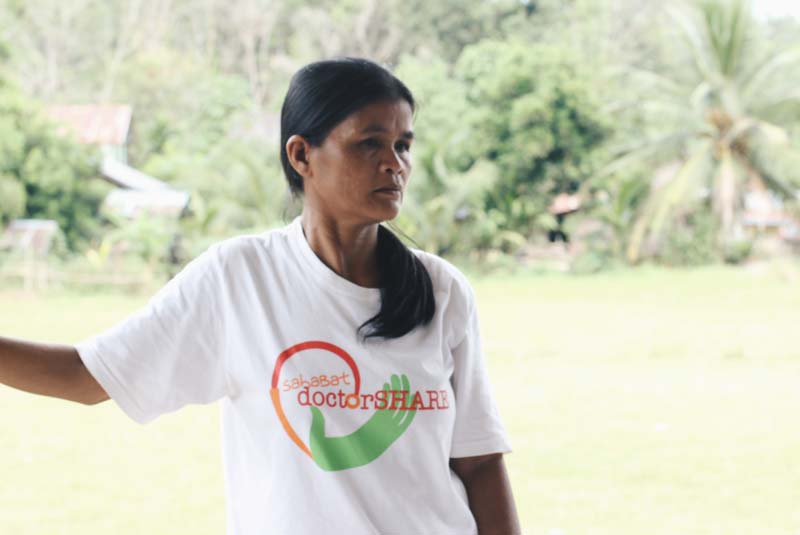 Rows of palm trees, precisely aligned in similar distance, lush palm leaves, dangling branches which prevent the sun’s light from shining directly onto the plantation soil. Almost no whisper of the wind, hardly any chattering sound of the dangling palm branches. The plantation’s silence ends abruptly when the farmers come to harvest the palms’ fruits.

There are various benefits and economic incentives encouraging farmers in Indonesia to lay out palm oil plantations. Being the largest island in Indonesia, Kalimantan (Borneo) is an easy target for palm plantation entrepreneurs. Kalimantan’s location right on the equator, the fertile soil, and its tropical climate facilitates the growth of the oil palms. One of the large plantations is located in the Belimbing District, Melawi Regency, West Kalimantan Province.

The rapid growth of the palm oil business and the profit that it promises encouraged local communities to lay out plantations. Not a few of Belimbing’s inhabitants depend on the profit oft the palm oil business: The stakeholders, the seed resellers, the brokers, the workers who take care of the trees and harvest the crops, the truck drivers etc. One of the workers of Belimbing’s palm oil plantation is Kanta. A lot of women who are born in Melawi serve as palm harvesters.

Working from the early morning until late in the afternoon, Kanta has to carry at least five kilograms of palm bunches on her shoulder on a regular basis. Palm fruits are carried from the plantation to the roadside so they can be picked up easily by trucks. Kanta, who is the mother of  six children, decided to work to support her family‘s economy. Despite the exhausting nature of her job, she did not regret her decision since her salary made it possible for the family to save some money. Unfortunately in 2005, a tragedy happened which forced her to stop working.

“When my youngest daughter was pregnant in the seventh month, I kept working. When crossing a wooden bridge, it collapsed all of a sudden. I fell. A palm nearly fell on my body. Thankfully it didn’t. If it had, I would have died,” said Kanta.

>Kanta explains that she almost plunged into a ditch at the plantation. With her last energy she used both of her arms to cling to the soil in order to prevent herself from falling into the hole. The other workers rapidly helped Kanta to escape this situation. She could be saved from falling, but felt an increasing pain in her armpit. The section began to become bruised and swollen and she decided to call in sick for work temporarily.

When the swelling in her right armpit started to feel disturbingly painful, Kanta went to the local Community Health Centre. The pain slowly disappeared after a treatment, but some small, swollen bumps remained. Although she did not feel pain, the swelling grew from year to year. Thinking about her situation as being completely mediocre, taking into account the financial situation of the family and also the condition of her husband, who was sick very often, Kanta decided to discard further treatment.

Kanta had to work again so the family could sustain its financial stability. However, she didn’t want to work at an oil palm plantation anymore. Her old body and the lump in the armpit didn’t allow her to work hard. Kanta became a rubber gum farmer at her relatives’ plantation. Her lump, which had grown to the size of a papaya, did not make her quit the job. In her mind, the only thing that mattered was that her son could continue to eat and to go to school.

More than a decade after the accident, Kanta’s situation aggravated. More bumps, growing like papayas, caused her pain and disrupted her ability to move. Her family and neighbors forced her to visit the health center again. Kanta was afraid, not because of the lump or the treatment, but because of the cost of the treatment. Surely, the doctor from the health center would suggest a costly surgery in Pontianak or Jakarta.

The 42-year old mother submitted her worries related to the surgery costs to the doctor of the community health center. According to Kanta, the doctor asked if she was ready to do the surgery in case someone was willing to bear all the costs. Kanta said promptly that she was ready for the surgery and her recovery. The swelling in her armpit was then photographed by the doctor, who then gave the photo to be presented in the mass media of West Kalimantan.

The information about her serious condition was spread out immediately. Many people wanted to help her, but didn’t know how to. Her case was also noticed by doctorSHARE in Jakarta. DoctorSHARE immediately made moves to find a donor to finance Kanta’s surgery cost in Jakarta. The WIC (Women International Committee) was willing to donate. In the following, doctorSHARE picked up Kanta from Melawi. One of the team members was Siska, A.Md. Kep. Siska said, that there was happiness on the faces of Kanta and her children when she encountered them.

“It was obvious that Kanta and her children were very happy to see me. They were very grateful and they never thought that doctorSHARE would come to help them,” Siska recalled.

A team from doctorSHARE brought Kanta to Jakarta by plane immediately. While in Jakarta, Kanta admitted that she received the best care and didn’t have to spend one penny. Kanta’s surgery was set for the 19th of April 2016 at the Husada Hospital. The surgery was handled directly by the founder of doctorSHARE, Dr. Lie A. Darmawan, PhD, FICS, Spb, SpBTKV.

“It is suspected to be a mammary aberans or “additional breast” under her right armpit of the size of a papaya. She was working as a rubber farmer. Of course it is annoying. It weighs about 3 kilograms, probably more”, Dr. Lie stated.

According to Dr. Lie, many people wanted to help Kanta. Some of them wanted to take the surgery cost, some the travel cost, while others wanted to bear the cost of accommodation in Jakarta. The surgery went smoothly without any disturbances and the “papaya” under her arm could be removed. Dr. Lie said that Kanta will be able to work as a rubber gum farmer again and continue her life with her children.

After the surgery, Kanta was happy and very grateful. There are still people who care and who are willing to help. Happiness was also expressed on the faces of her children. Now they can see her move happily and without any problems. After being fully recovered, Kanta’s plan is to continue working to support her family.