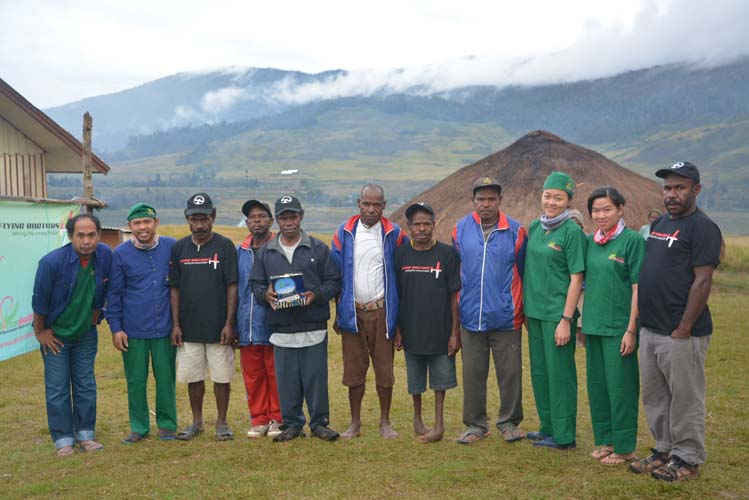 The third doctorSHARE medical service activity through the Flying Doctors program in 2016 (the sixth time since the program was first rolled out) was carried out on July 30 – August 7, 2016 in West Wano District. West Wano District is a new division of Kuyawage District, Lanny Jaya Regency, Papua Province.

Carrying the theme “Reaching Eastern Indonesia with Love”, the Flying Doctors team consisted of 2 general practitioners, 1 surgeon, 1 nurse, and 2 non-medical volunteers.
The journey was taken from Jakarta to Jayapura for approximately 6 hours, followed by a flight from Jayapura to Wamena for approximately 45 minutes. From Wamena, the team used a Cendrawasih Airlines charter plane type PAC 750XL to reach West Wano District for approximately 35 minutes.

A year ago, West Wano District and its surroundings experienced a white frost disaster. As a result, residents had to be evacuated to Tiom, the capital of Lanny Jaya Regency. The hail, known by residents as ‘white dew’, lowered the temperature to below zero degrees Celsius. As a result, several residents died. Livestock also died due to contaminated food and drink sources and extreme temperatures.

“At the time of the disaster, our gardens were destroyed by the oily liquid from the snow,” said the head of the West Wano Village auxiliary health center (Pustu), Timothi Telenggen.
Now the West Wano District, which has an altitude of 2834 meters above sea level, looks normal. However, there is no adequate road access. To arrive at this location, you must use a non-commercial airplane that does not have a fixed flight schedule.

In addition, the community also used to walk for two days and two nights from the nearest district that is still accessible by vehicle.
Electricity and clean water are not yet available in this place, let alone communication signals. The Pustu building and the primary school (right next to the Pustu) are empty buildings with no occupants due to the absence of medical personnel and teachers willing to be posted.

Children are unable to attend school on a daily basis and never know when they will be able to. In addition, people who are sick can only ask for medicine from trained health cadres whose knowledge and skills are relatively limited.

Upon arrival at the destination location, the team, accompanied by an officer from the Health Office, Mr. Arnus Yigibalom, started the first activity, namely health counseling on the topic of PHBS (Clean and Healthy Living Behavior) to children. This counseling activity was held in the front yard of the West Wano District Sub-Community Health Center (Pustu).
After practicing how to brush teeth properly, the team also distributed deworming drugs to 190 participants, both those who attended the counseling and those who did not. Donations of sandals and clothes were also given to the community, both children and adults.

The second day of activities was a general medical treatment that took place at the West Wano Pustu Building. The activity which took place from 09.00 – 15.00 WIT was attended by around 150 patients. The most common cases found were myalgia (muscle pain), osteoarthritis (bone pain), arthralgia (joint pain), ARI (Acute Respiratory Tract Infection) and dyspepsia (abdominal pain).
Minor surgery activities took place on the third day. There were 4 patients who had registered and undergone a series of pre-operative examinations. The cases handled by the team included ventral hernia and lipoma. After the surgery, the team conducted training activities on basic life support and first aid for trauma patients for 6 local cadres.

The activity guided by Junaedi, S.Kep. was enthusiastically followed by the cadres. Residents were also willing to walk long distances for treatment. The enthusiasm of the residents impressed the team, as well as made the team realize how much the residents longed for proper health services – something they had never had before.

At the end of the activity, the team was delayed in returning home. The flight from West Wano to Wamena, originally scheduled for Friday, August 5, was canceled due to poor weather conditions. Finally, the team stayed another day in West Wano and this time the team mingled with the community and lived in Honai (traditional Papuan houses).

According to Mr. Christian Sohilait, doctorSHARE’s medical service in West Wano District is very appropriate considering the area is limited in terms of access.

There are three main reasons expressed by the Secretary. First, there is no road that provides a direct link to Tiom. Secondly, last year’s disaster (frost) still leaves a trauma for residents. Third, West Wano District and Kuyawage District are conflict-prone areas (zona me).