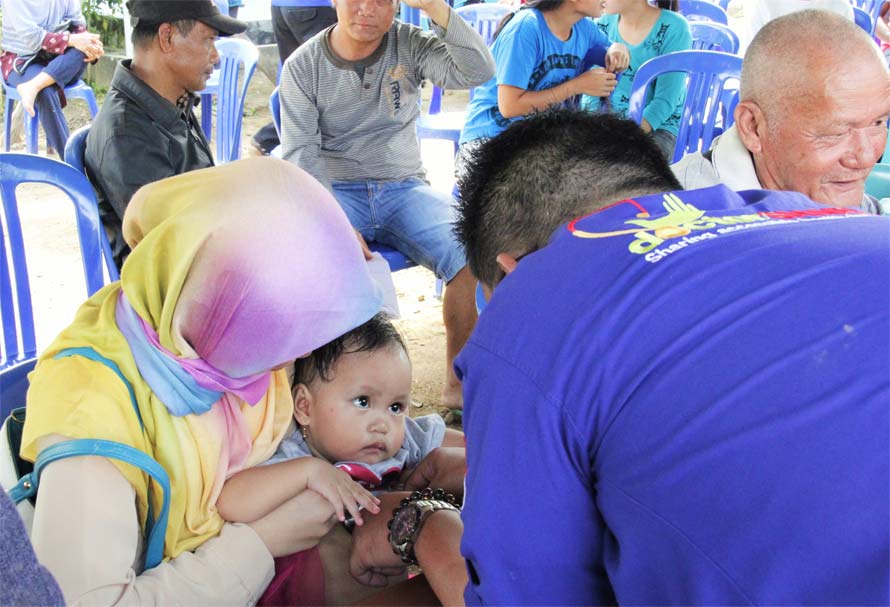 The nearest hospital in Tanah Grogot takes three hours to reach. It has to pass through a damaged road. When it rains, the road is muddy and vehicles can get stuck in the mud puddles. This is the situation that the doctorSHARE team witnessed firsthand when providing medical services in this location.

Imagine if a patient in an emergency condition has to go through such a road. Especially if the patient is pregnant. According to the local midwife, it is not uncommon for patients to end up giving birth before reaching the hospital.

The difficult access to the hospital is slightly overcome by the presence of the Puskesmas Bantu (Pusban) in Riwang Village, Batu Engau District, East Kalimantan. In the Pusban, there are two midwives assigned by the Paser District Health Office.

Riwang Village Pusban, which consists of two examination rooms, is located near the Riwang Village Office. The midwives live right next to the Pusban. The equipment at the Pusban is actually quite complete. However, patients in critical condition still need to be referred to the hospital. The lack of an ambulance is also a problem.

“The condition of Pusban is quite good, it has the first aid equipment for childbirth. It’s just that the road is damaged and people are still reluctant to get their health checked,” Dr. Rocky Ellery James Tumbelaka, doctorSHARE’s medical service coordinator in Riwang Village, explained.

In the period leading up to the birth, it is not uncommon for pregnant women to be reluctant to go to the Pusban to give birth. Pregnant women prefer to give birth at home. In such conditions, Pusban midwives are forced to approach the patient’s house even though they have to travel through difficult terrain and unpredictable weather.

Even at night, Pusban midwives still visit the homes of patients giving birth. The damaged road and distant houses force Pusban midwives to sleep at the patient’s house.

“If the patient gives birth at night and does not want to be taken to Pusban, we (midwives) have to go there and often have to stay there,” said Sumartila.

Armed with a bag containing birthing aids, the midwife goes to the patient’s house. The contents of the bag are useful to help the patient give birth, but it is not equipped with a resuscitation device (a tool for babies who have difficulty breathing) and oxygen. However, this magic bag from the Pusban midwife in Riwang Village has resulted in zero deaths during childbirth.

“This is the only bag we bring to the patient’s house when giving birth. The contents are quite complete. Although we still lack oxygen and resuscitation equipment, we can still replace it with finger help if there is a baby who has difficulty breathing,” explained Sumartila.

Health checks continue to be carried out after childbirth. After the baby is born, the baby is given vitamins. The mother’s postnatal condition is also taken care of. Despite being in an area with difficult access, immunizations in Riwang Village are routinely held. The health of babies in this village is not left behind by the city.

At one point, residents were concerned about the news of fake vaccines on television. However, the midwife was able to explain where the vaccines at Pusban came from. The medicines and immunization vaccines come from the Health Office of Paser Regency, East Kalimantan.

The midwife of Pusban Riwang Village hopes that residents will be more aware of checking their pregnancies to minimize unwanted events. In addition, although it can still be handled through manual breathing assistance, the midwife really hopes for a resuscitation device for babies.

The goal of realizing healthy mothers and safe babies in Tanah Grogot is not easy. But the existing limitations do not hinder the struggle of Pusban midwives. We should give them a thumbs up.