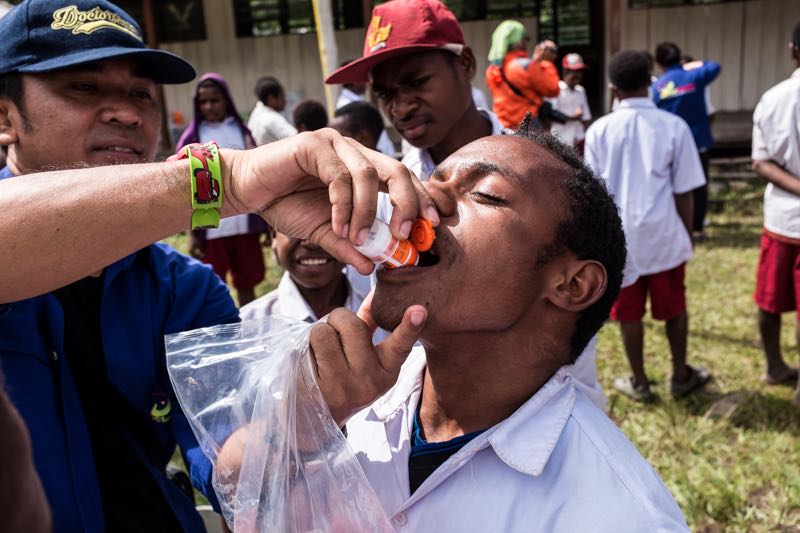 DoctorSHARE’s medical service activities in the 7th Flying Doctors program were carried out in Hitadipa District with the theme “Reaching Eastern Indonesia with Love”. The activity which took place on October 6 – 14, 2016 consisted of seven volunteers consisting of a surgeon, two general practitioners, one surgical nurse and three non-medical volunteers.

On the second day, the team performed minor surgery at the doctorSHARE tent for 23 minor surgery patients (29 cases) who had undergone pre-operative examination. The highest number of cases were lipoma and ventral hernia.

Deworming and the distribution of donated goods in the form of sandals, children’s and adult clothing were also carried out in the elementary school yard and Hitadipa Health Center yard.

In the process of distributing donated goods, the team was assisted by the local community so that it took place in an orderly and smooth manner. After that, the team provided training on Basic Life Support and First Aid in Accidents to Hitadipa Health Center health workers.

In between activities, the team also mingled with the local community. The team discussed the conditions, difficulties faced, and alternative solutions that can be done for the local community as well as hearing their responses to these changes.

The team also directly observed the condition of the Moni tribe’s honai and explored the community’s water sources and provided material assistance for the construction of clean water reservoirs to be jointly managed by and for local residents.

Hitadipa District is a district in Intan Jaya Regency that is considered quite good and organized compared to other districts. In this place, the community began to enjoy electricity facilities from solar cells which are available from 18.00 – 00.00 WIT.

For health facilities, there are currently seven nurses and midwives serving the community at the Hitadipa Health Center. The doctor on duty is out of town. If there is a patient who requires further treatment, the patient will be referred to the nearest hospital in Nabire by plane.

Overall, the medical service activities went quite well. The community is enthusiastic about the presence of the Flying Doctors team and hopes that the team can also reach other villages in Hitadipa District. The collaboration between doctorSHARE and the Intan Jaya Regional Government, Somatua Foundation, and Flying SAS is going well and this kind of synergy will continue to be developed.