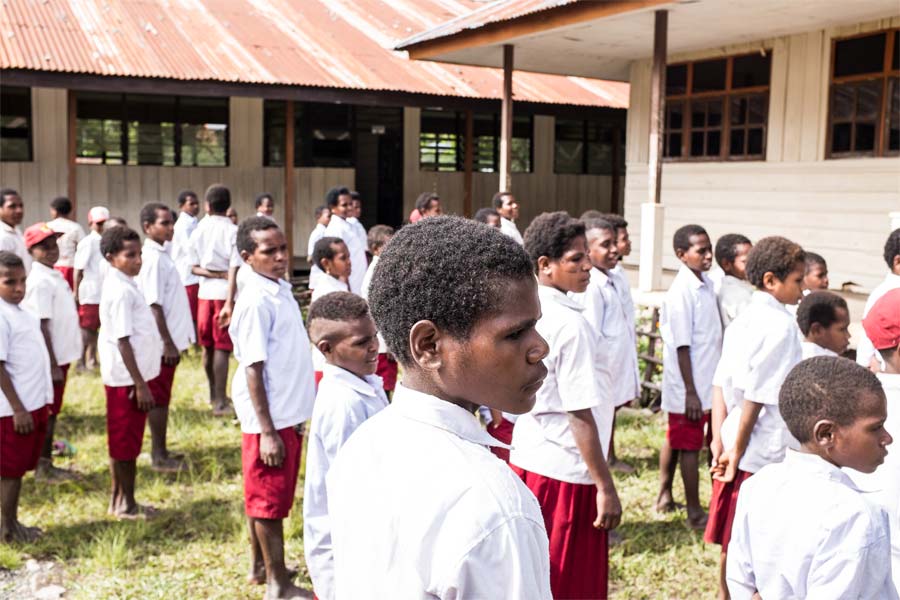 When we talk about providing education in areas that have been neglected for years, we talk about areas that have yet to be fully developed regarding to their basic infrastructure. They are located mostly on the outskirts of Indonesia. We often recognize a necessity of educating the people living within these areas from a top-down developmental approach.

But at this point, we should stop for a moment and reflect on this approach to provide education.

To apply a system of educating people focusing on the centralized and urbanized approach based on the premises that it is currently working within cities and urban areas, ignores the fact that not everyone is living within those designated areas.

Can education be delivered using another approach, one that includes the people residing within the designated areas?

An example for such a context would be the education that is provided for people who are living in the highlands of Papua, a region, where access to basic health care and education remains scarce. Should their education take into account the apparent economic and social difficulties many Papuans have to face? This becomes especially evident when comparing their situation to other Indonesian citizens living e.g. on the island of Java.

Or should merely a standardized educational program be provided based on Indonesia’s national curriculum?

These questions have to be asked and answered when developing the approach of providing education adapted for individuals living in the remote areas of Indonesia. This process however will not only provide the designated people with certain skills and knowledge but undeniably change their perspective on life as well. This can, contrary to popular belief, result in disastrous outcomes either for them or for their immediate environment.

For example the education in Hitadipa, a small village near Sugapa, the capital of the Intan Jaya regency, is conducted by only one school. Many of its students have been educated to the junior high school level (grade 9).

A relatively high number of them continues their schooling in senior high school (grade 10-12) in Sugapa and, if possible, many have also managed to go to universities in the city of Jayapura or even universities located on Java.

However, after finishing their schooling, a quite large number of young and well educated people struggle to find jobs or put their education into good use. For instance Maria (22) had to face such a situation.

“I just recently finished my university degree in IT from Bandung, West Java, but I came back to Hitadipa and the only job that is available for me here is to help my parents to take care of the farm. Even in Sugapa, where the local government has been looking for educated young people, the competition is so hard that I don’t think that I’ll get a job.”

The first topics that need to be considered is the method of delivering education on the one hand and the content on the other hand. If the approach is based on a standardized method which is dictated by policy makers whose perception of education is distorted through the lens of a highly urbanized Jakarta, education will never be appropriate for people living e.g. in the countryside of Papua.

Papuans are educated in a way that they may adapt to the rest of the Indonesians and to what the central government perceives as more modern and more appropriate for a society of the 21st century.

After all, when educating people living in the peripheries, such as Indonesia’s Papuans, the question is: For whom and for which purpose are they educated? Are they put first? Or are they only being educated to merely adapt to the basically Javanese-centric Indonesian identity, and lose their own identity in the process of education as a result?

Considering the lack of basic infrastructure in many areas of Papua, this systematically enforced societal ‘upgrade’ will deny the people the successful promises that the education system has guaranteed.

They will not be able to take full advantage of the standardized and urban-based education they have received, simply due to the fact that they are not living within a modern urban environment.

The often carried out solution, which many Indonesians from the peripheries have found to tackle this issue, is to move out of their initial environment and take on the “merantau”. This is the common Indonesian pursuit of happiness for those living outside Java, which basically translates to “journey to other lands in order to find a better living.”

What is the use of their education when individuals cannot put into practice the knowledge and skills they have acquired in the environments they were born in?

They also can’t rely on job opportunities within those environments since they are extremely scarce. The education that they have received is useless in their immediate surrounding.

This is even more severe because they are not taught about how to apply the skills and knowledge that they have received to the urgent social issues that their local communities are faced with. Education for them becomes nothing more than a method to participate in a system which is already well-established in the urbanized and developed areas.

Moreover, such an education can damage a society’s cultural identity. The efforts to diminish the negative impact of this development have been disturbingly small. They are often limited to providing programs such ‘muatan lokal’ where people merely learn their local language and at times some traditional musical instruments. The programs rarely refer to the grave social issues that the peripheral areas of Indonesia are faced with on a daily basis.