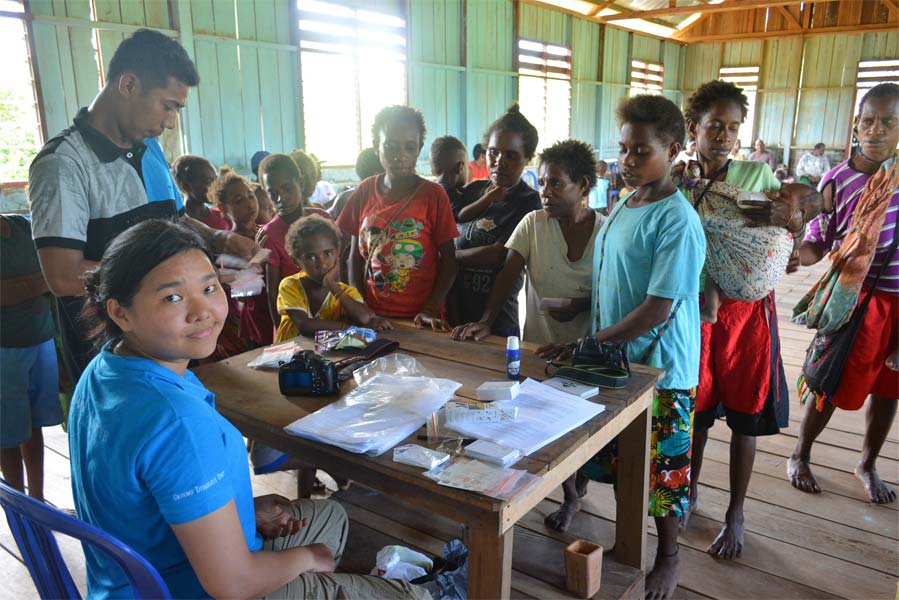 “You are going to Papua with doctorSHARE.”

The assignment to Papua came 10 days before the scheduled departure, the result of a meeting between the Eijkman Institute and doctorSHARE a few days earlier. In a short time, Gludhug and I prepared all permits, proposals, participant forms, and equipment to take samples.

Internet information about Basman Village in Mappi Regency is very limited. Let alone being able to estimate the travel time and route. When I opened a map, I only saw a spot surrounded by forest and a river with no other information.

The Eijkman Institute of Molecular Biology has been researching genomic diversity and disease in ethnic Indonesian populations for the past two decades across the archipelago. Although we have sampled in Papua, the high ethnic diversity and difficult access to very remote areas means that we have yet to visit many important locations. Therefore, we did not miss the opportunity to go with doctorSHARE’s Flying Doctors team.

The distance we had to travel to Basman Village was unbelievable. To step on the land of Papua alone, it took six hours and two time zones (Jakarta – Merauke). Luckily, that day an eight-passenger Cessna seaplane was available to take us within one hour from Merauke to Keppi, the capital of Mappi Regency.

The other option was the 12-hour overland route from Merauke (which we also experienced on the return trip). In Keppi, we spoke with the Regent, members of the DPRD, and the head of the Health Office about the purpose of our visit.

From the “City of a Thousand Swamps” Keppi, it took four hours by speed boat to reach Senggo Village where we were able to get enough electricity to freeze ice packs to store samples and refrigerate materials for blood type tests. We continued through the swamps for another four hours to reach Basman Village. Upon arrival, we were greeted by hordes of children who readily helped unload the cargo from the speed boat.

In the arid village of Basman, the blue sky was blazing hot. The villagers already knew the purpose of our visit and welcomed us happily. The arrival of our team of doctors, nurses, researchers and local government officials made the usually quiet Basman Village festive. The men set up a tarp in the yard of the auxiliary health center (pustu). Residents passed by, curious about the presence of this group of foreign faces.

The residents of Basman Village consist of the Citak, Kombai and Korowai tribes. Traditionally, the Korowai people live in houses built on the tops of tall trees and live very simply by hunting and gathering. Until now, there are still Korowai people who live in tree houses.

In Basman and a neighboring village called Mu I, there are rows of houses donated by the Social Affairs Office that are decaying because many are unoccupied. In fact, they are less than five years old. These houses were an attempt by the government to resettle the Korowai community. The lack of waterways and cultivated land has caused them to return to the forest. There is almost no crowd in this village except for Sunday church services.

A sturdy school building stands but is silent because there are no teachers. The Pustu is only occasionally visited by orderlies and doctors from neighboring health centers because there are no doctors or nurses on staff. There is no electricity, only a generator. No phone signal, even five days without news made our colleagues in Jakarta anxious.

There is also no clean water. Residents rely solely on rainwater. Swamp water is abundant but brown, smelly, and itchy. With no choice, residents continue to use it for their daily needs. Not surprisingly, residents are very susceptible to skin diseases and diarrhea. Ascaris worms comfortably reside in children’s stomachs so that most of them have distended bellies. Their hair also turns yellow, a sign of malnutrition.

I saw a boy engrossed in licking the instant noodle seasoning he had poured into the palm of his hand, just like a snack. Toddlers ran around with thick, perpetual snot running down their noses. Children and adults generally only have a single piece of clothing, worn until it is shabby and tattered. Sanitation is a luxury. What’s more, there is almost nothing here. There is no infrastructure to make their lives more humane.

Initially, I thought that language differences would be an obstacle to sampling. In addition, I had also heard that Papuans are very sensitive about blood collection because traditionally, blood is considered sacred. My worries were allayed. During the three days in Basman, hundreds of people came in droves to have their blood checked.

The Eijkman Institute took blood samples for microscopic and molecular malaria screening because Papua is a malaria endemic area. In addition, we also took samples from adult representatives of families three generations and above, who did not intermarry with other tribes to see the kinship between populations and get a picture of the history of human migration.

Specifically, this study aimed to determine the population structure and genomic diversity associated with the red blood cell disorder Southeast Asian Ovalocytocis (SAO). SAO is a form of adaptation in malaria endemic areas where red blood cells change shape into ovals as a defense mechanism from malaria parasites. We also conducted blood type checks, the results of which can be taken home immediately.

The enthusiasm of the residents made us flooded with enthusiasts. Luckily, the Eijkman team was assisted by Mama Ocha (midwife), Sister Jenny (midwife), and Uncle Baso (orderly) from Amazu Health Center. Filling in the family tree form is crucial for genome diversity research.

At first, people were a bit confused as to why this was necessary and many tried to remember their family names. Many were laughed at by their friends for forgetting their own grandparents’ names. It was heartwarming to see that some of the people who came had even brought notepads with their family names and said they wanted to have their blood tested.

Even though they had never been injected, they were brave enough to have their blood drawn. Children were not afraid to have their fingers pricked to check for malaria. Residents crowded around the table, curious about the movement of our hands putting blood into tubes and the array of sampling equipment they had never seen before. Their faces light up when they receive their blood type cards, which will be useful if they need a transfusion or blood donation.

Despite the limited facilities, I saw the Basman residents’ high level of concern for their health. Mothers did not hesitate to hit their children who cried because they refused to take deworming medicine given by the doctorSHARE team. Until the last day of the activity, residents from distant villages continued to come for health checks and minor surgery.

Imagine, how much speed boat fuel they had to pay for a two-hour trip to the nearest health center with a doctor in Amazu? Health is an important foundation for every individual to live their lives. Basman residents yearn for access to affordable and inclusive healthcare, the social justice they are entitled to as Indonesian citizens.

There are still many challenges in terms of infrastructure, access, and resources to realize a Healthy Indonesia here in Basman. Hopefully, the arrival of local government officials together with us can realize the acceleration of development in this region.

For three days, doctorSHARE health services and sample collection by the Eijkman Institute have been completed. We collected more than 300 blood samples that will be analyzed in Jakarta. The long road to the capital is again traveled while hoping for rain so that the population can get water. We look forward to returning to Basman once the results of the analysis are in and truly hope that there will be teachers, doctors and a better life in the village.

*Isabella Apriyana, S.Si is a research assistant at the Eijkman Institute of Molecular Biology