Their Wounds are Ours 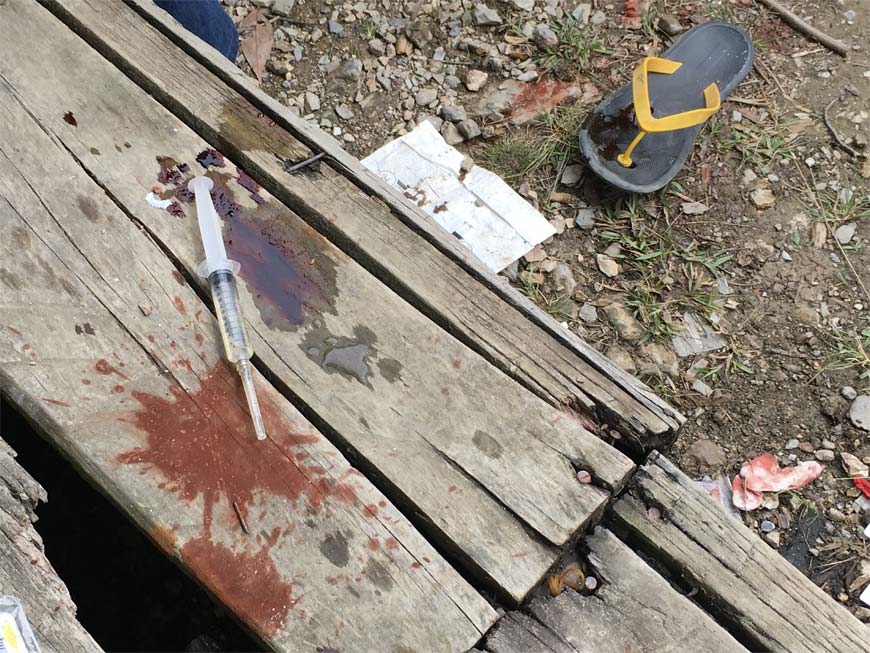 We got trapped between two tribal-based groups at war that fought each other with guns as well as bow and arrow. The reason for that are the different political opinions regarding the local elections. A portrait of democracy in Sugapa, Intan Jaya, Papua.

The sound of gunshots broke the silence in the valley. Dark smoke billowed into the sky. Mothers and small kids ran out of the house. They witnessed a fight from the distance which broke out due to local political conflicts. It was not clear from where the sound of gun bursts came. The origin of the smoke was unclear as well. Whose house had it been and which groups had shot at each other? The atmosphere was tense.

Suddenly a few young men carried a guy who had been wounded in the left chest to the place where we had found shelter. The team learned at this point that the fights were not only carried out with guns but also with bow and arrow. The young man was completely out of breath.

“I felt my heart detach. Oh God, it was so damn painful,” said the wounded guy while bearing a deep pain. The perforated wound was clearly observable on his left breast. The young man found it difficult to breath.

“Lay him down. How his the RR pulse? (“RR” in the abbreviation for Respiration Rate),” Dr. Santi Yuanita, a surgeon from Jayapura, stated. Dr. Reynaldo, one of doctorSHARE’s voluntary doctors who participated in this mission, examined the victim’s vital signs.

“Has the arrow already been removed?”

“Yup, doc, already,” replied another guy who had accompanied the patient.

“Stay calm. Let me clean the wound first,” replied Dr. Santi. Dr. Herli, the coordinator of the activities of doctorSHARE’s Flying Doctors program, immediately prepared a report sheet to write down the identity of the injured person. One of his relatives who was present immediately gave his permission to perform the necessary operation and signed the report of action.

Dr. Santi palpated the perforated wound with her finger to ensure there were no objects left inside the chest. Her forehead frowned. However, it is always difficult to determine how severe the sores on the inside are. The wounded guy grinned while he tried to withstand his pain. Pain relievers were immediately injected into his chest. Dr Reynaldo and a paramedic, Mulhendra were busy preparing to stitch up the patient’s wound.

“We are going to install a breathing hose in his left chest to reduce his shortness of breath.  Relatives agree? If you agree please sign the consent letter,” Dr. Santi explained to the patient’s relatives.

With the breathing hose installed, the patient’s breathe became more regular. He sat quietly while finishing a meal he had gotten from a neighbor: rice and instant noodles.

Not long after this incident, new victims arrived. Two people carried another man whose leg was bleeding.

“Why is this?”, asked the paramedic, Mulhendra.

“Got shot, doc,” replied the carrier. The victim stayed quiet as he tried to endure the pain. There were two small holes in his left leg. Mulhendra took a bandage and an antiseptic and immediately started to stitch up the wounds.

Some residents gathered to watch the medical treatment which was conducted by us, the medical team from doctorSHARE. They asked us to come closer to the battlefield to treat other victims. The conditions put us in the place to make a difficult decision:

Firstly, while in the field we would not know the exact situation. It would be impossible to locate the different conflict parties or identify the development of the combat actions. Secondly, there were no guarantees for security. Thirdly, it would be difficult to find a neutral place where the victims of each group could be treated. Last but not least, the government should have expected the reaction of the people regarding this election in the first place. It should have provided adequate conditions, both in terms of security and medical services.

We knew that the city we were operating, Sugapa, already had a community health center (known as “Puskesmas”) which was located just near the market square of the city. The center was operated by two doctors and several nurses. However, during the outbreak of the fighting, it was not possible for anyone of the doctorSHARE medical team to get in contact with them because the communication infrastructure was destroyed. Due to that, there was no information at all how the situation was at the health center.

Individual requests from residents were also difficult for us to fulfill and might have only met the expectation of one of the groups leading to envy and distrust from the others. However, in our hearts and our humanitarian mindset, we wanted to help all of the victims – Whoever they were.

This heated up atmosphere due to the elections in Intan Jaya was far beyond our expectations. Our initial plan was only to provide medical services in Hulagupa. It takes about three hours by motorcycle to get there from Sugapa. However, during the fighting, the motorcycle riders, who are mostly immigrants from other regions of Indonesia, did not dare to operate. They were afraid of attacks from the indigenous population. They chose to avoid any conflict in order to live peacefully with their families. On the other hand, our medical equipment and the logistic capabilities were limited due to this fact. They were not sufficient for the treatment of the many patients that the conflict produced.

That day, February 25, 2017, people were still waiting for the final results of the commission’s decision in Intan Jaya regarding the local elections.

The official announcement had not yet been made but rumors had emerged which caused the tribal-based support groups to gather in the streets. Members of the Moni tribe, whose candidate lost the elections after all, started blocking the streets with wooden beams.

People were not allowed to leave the town. The airport of Sugapa was closed for any flights so the city was temporarily isolated.

Intan Jaya is inhabited by the residents of two major tribes: The Moni and the Dani. They reside in the mountainous region of Papua. These two tribes often get in conflict with each other. The causes can be of any kind – starting from personal affairs and fighting youngsters to political affairs such as elections. Whenever there is conflict it is attempted to solve it with violence and without any legal settlement.

“It is far from safe. There are no motor riders willing to take us to the field, “said Noga, a local resident who usually accompanies us.

We chose to stay at the official residence which is owned by an airport officer and is located near the airport of Sugapa. The house was quite safe from the raging masses which were involved in the conflict. From there we were only able to monitor from the distance what was happening. We waited for the fight to subside.

Trying to understand the conflict in Papua is not easy. We already conducted several missions to the rural areas and provided medical services for the locals. In the remote areas, public medical services in Papua are extremely poor. Community Health Centers (“Puskesmas”) and healthcare professionals are very limited. Schools are operated without any teacher, let alone the lack of infrastructure. And the prices of goods for basic needs are sky high.

This limitation becomes part of the daily life of the Papuans living in the mountains. It’s not surprising that the citizens expect the special autonomy in Papua to develop a justice system and improve the living conditions of the people.

However, it is definitely not easy to pursue your hopes and dreams due to the conditions. The regional governments must work really hard to ensure that their development programs target the right goal and are fair for everyone – regardless of the ethnic group. They should be able to set development priorities themselves. Before this happens, it will be difficult to improve the quality of living in this society.

When the conflict began to subside, we eventually ventured out to see how the victims were treated in the clinic. We were accompanied by the airport officer, Ramli. In the ward, we saw five patients, four of which had neck injuries, the other one had injured the sole of his foot. We were only able to stitch up some wounds and change the bandages. Also, we recommend the officers to transfer the patients to the hospitals in Nabire and Jayapura.

“I want to help in the health centers. But I can’t, because there is no guarantee for security. It’s a dilemma, “said Dr. Santi.

It was sad to see the chaos in Sugapa which should not have happened. If this conflict continues it will threaten to cause even more serious social issues. After all, the biggest victims are the people themselves. Not only they lose their families and belongings, they also lose their peace and their trust. Residents were seized with fear which after all causes more poverty and hinders the development.

For us, this conflict is a very valuable lesson to see Papua in another context and more seriously. It is obvious that conflicts and the root of the violence are the most serious problems in this natural paradise. This occasions has made us more aware and warned us to pay more attention to what is happening in Papua.

Their wounds are ours as well.