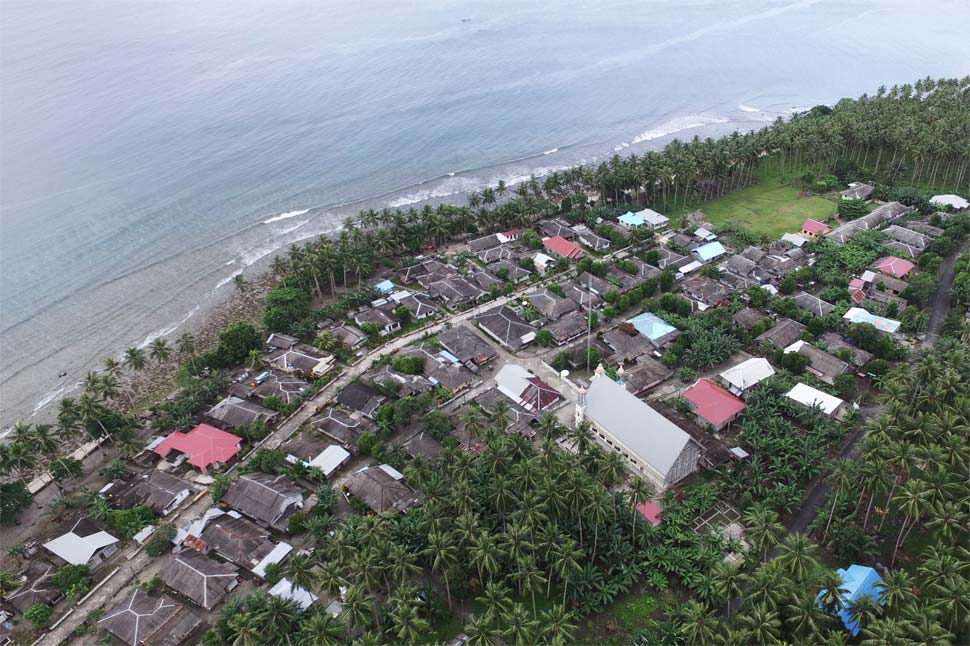 Cloudy weather has been hanging over since the arrival of the doctorSHARE Team on Mayau Island, Batang Dua District, Ternate City, North Maluku. The team had to use a speed boat to get to Bido Village. From Bido, the team traveled nine kilometers by truck and ambulance belonging to the local community health center.

Muddy and rocky roads were the terrain that the team traveled. The ambulance used was no longer beautiful to look at, as it had been eaten away by corrosion. The floor of the ambulance had a hole right above the four tires that were spinning swiftly. The roof of the ambulance was leaking and the glass was broken. Perhaps it was the sea air that made this ambulance so vulnerable.

As I traveled to remote areas in eastern Indonesia, I think this was the first time I found a place that was smoke-free and had a ban on drinking alcohol. These places are Bido Village and Lelewi Village. Cigarettes and alcohol are usually ingrained in the Maluku region. So the existence of a village without cigarettes and alcoholic beverages is unusual.

“I have lived in Bido since 1965 and the smoking ban has been in place,” said Marinus Bilote, a father of nine who lives in Bido Village.

This effective ban is enforced by adat and the church. In fact, Marinus said that he could not explain when the ban came into existence. “What is clear is that my grandfather, father and myself do not smoke,” he concluded.

Speaking of the effects of alcohol, doctorSHARE’s media volunteers have reported several times on the effects of alcohol on traffic accidents in Atambua, and it turns out that the people in Bido Village are well aware of the negative effects. “If the youth here are introduced to drinking, there will definitely be chaos,” said one Bido resident, Yutus.

When touring the neighborhood, you can see neatly organized buildings and cemented streets. Some people like to gather in front of their houses, chatting with their families. Teenage children were playing with their friends. Trees towering along the road create a shady atmosphere. One thing that stood out was that there was not a single cigarette butt litter.

To satisfy my curiosity, I visited every small stall. Searches were conducted in Bido or Lelewi. Arif, a member of the Water Police on Mayau Island who accompanied us, insisted that it was difficult to find stalls selling cigarettes. “It’s not allowed to smoke here and the stalls probably don’t sell,” Arif said.

It turned out to be true, the stalls visited did not actually sell cigarettes. There were a few stalls that sold them, but they had expired five years ago. Cigarettes are sold only to migrants or visiting guests.

Batang Dua sub-district with its six villages can be an example. Two of the six villages have implemented regulations prohibiting smoking and drinking alcohol. The remaining four villages, Mayau, Perum Bersatu, Tifure and Pantai Sagu, have only implemented these rules on certain days. Slowly but surely the unwritten rules will be applied evenly.

The community in Batang Dua sub-district also benefits from the regulation. Officers at the Mayau Health Center are constantly educating the community on the dangers of smoking and alcohol. At least the people here look healthy, and most importantly, they can save money.

So far, there are no banners or billboards prohibiting smoking in Batang Dua sub-district. The unwritten rule continues to apply and no one is seen violating it. The pastor at the Bido Village Church, Ayubiyu, said that the only punishment for smoking violations in this area is cleaning the village. “But people don’t want to violate because usually the sanctions of reprimand and advice are also enough,” he said.

The Ternate City Government has actually regulated the smoking ban. Through the Mayor’s Decree Number 28 of 2014, it became a Regional Regulation (Perda) that regulates the No Smoking Area. However, this regulation has not been applied evenly due to lack of socialization. “I don’t know the regulation, if I have to be fined 50 million and six months in prison, of course I will stop,” said one resident who smokes in Mayau Village.