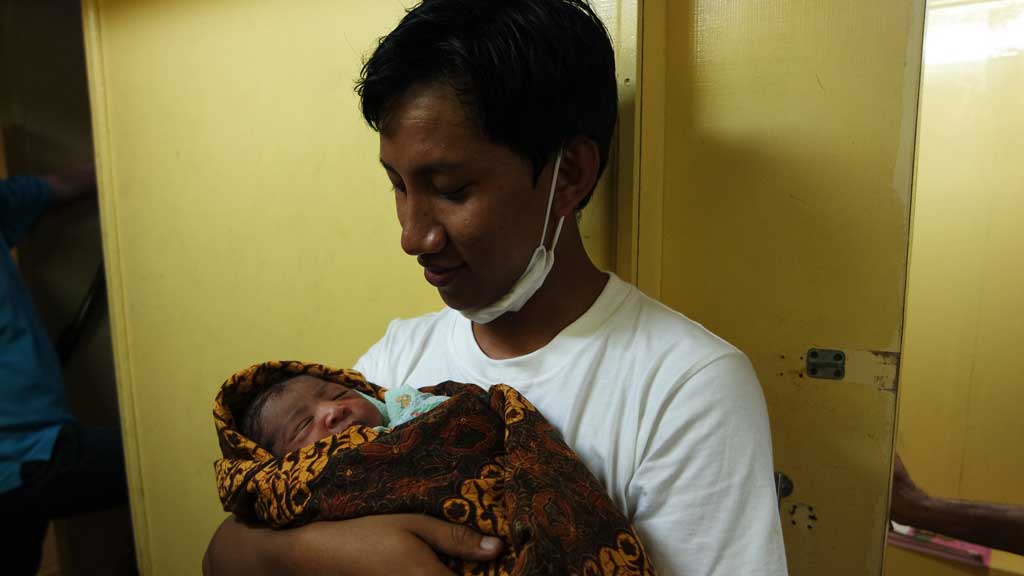 In 2014, I was challenged by my girlfriends to watch a video of childbirth on Youtube. I forgot what topic we were talking about at the time. The challenge came from one of my friends named Ririn. Ririn is currently pursuing a master’s degree at the School of Business and Management at the Bandung Institute of Technology.

She said that watching videos of childbirth would make me respect my mother’s struggle more. With full appreciation, my friends described the struggles and pain that mothers go through when releasing a new human being into the world. Suddenly, I declined the challenge. The obvious reason was fear. The images of pain managed to influence my mind.

Two years later, on July 17-26, 2016, I was involved in medical services to Doi Island, North Halmahera with a team of doctorSHARE volunteers. I graduated from Fikom Unpad Journalism, I acted as a media team not as a medical team. My job was to cover and document the events during the medical service.

A unique event for me in the medical service to Doi Island was two cesarean birth operations. I witnessed and documented the two surgeries first-hand. It felt like an answer to my friends’ challenge two years earlier. I witnessed the birthing process in person, not through video.

The two cesarean section patients were Raodah Ali and Kartina Djikan. The pregnancy conditions of these two mothers were very serious. Raodah had a transverse or breech fetal position with the baby’s head not yet facing down. Normally, babies are born with their heads out first, followed by their bodies and legs. The breech or transverse fetal position made Raodah have to undergo a cesarean section.

Raodah’s baby was named Dani Dharmawan. ‘Dani’ is a combination of the names of the two doctors who handled the cesarean section, Dr. David E. Tantry, Sp.OG and Dr. Nidia Limarga. While ‘Dharmawan’ is taken from the name of the ship where the baby was born as well as the last name of the founder of doctorSHARE.

Kartina Djikan’s pregnancy was her 10th pregnancy at the age of 44. When examined on July 22, 2016, Kartina was known to have experienced a rupture of membranes two days earlier. The doctor handling Kartina’s case, Dr. David E. Tantry, Sp.OG finally decided to perform a cesarean section the next day. In addition, Kartina also had to undergo a tubectomy or ovarian canal cutting process. With a tubectomy, the egg cannot enter the uterus to be fertilized.

“This second baby (Kartina’s patient’s baby) has had a rupture of membranes for two days, besides the baby can die in the stomach, the mother can also get infected. For this second case, we also tubectomized the mother, we sterilized her. The problem is that she might get pregnant again. So to avoid all risks, we had a tubectomy,” said Dr. David E. Tantry, Sp.OG.

The day before the delivery, my teammate Olfi Fitri Hasanah and I accompanied Kartina’s husband, Agustinus Nikere, to prepare supplies and clothes for his wife’s delivery. After getting a referral from the doctor for a cesarean section, we immediately departed from Dama village by boat to Agustinus’ house in Cera village. The boat has no engine, so Agustinus rowed it to its destination.

The floating hospital docked in Tobelo the next day at eight in the morning. Some equipment and an additional doctor were brought in from Tobelo Regional Hospital. Kartina Djikan’s cesarean section went well and the baby was named Jefferson Nikere.