Prayers, Love, and Hope for Leksa 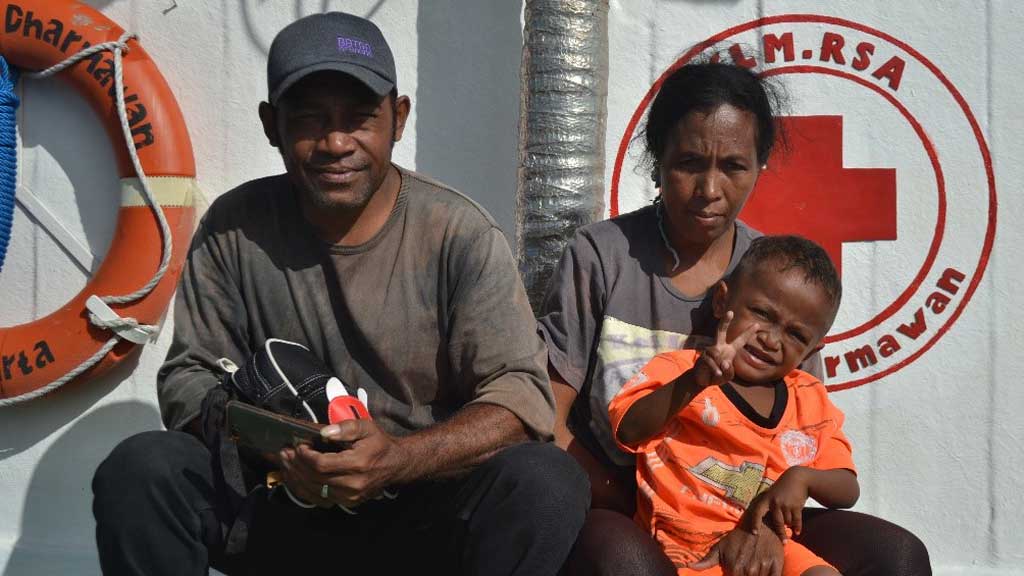 Two weeks before the doctorSHARE team arrived in Ohoi Langgiarfer, South West Kei Besar. The news that there would be medical services had already spread to the community of Soindat, South Kei Besar from information from the local village government. The existence of free health services and surgeries and the difficulty of accessing health there, makes local residents enthusiastic to get their health checked.

This news also reached Keterina’s ears, and the 40-year-old mother felt a mixture of joy and emotion. According to her, the news of doctorSHARE’s arrival was like God’s answer to her prayers for the recovery of her child, Leska Rahantali. Leska, her nickname, is now three years old. At first glance, there is nothing different from Leska, like other children his age who still like to play.

Keterina explained that her child did look normal but since the age of three months Leska often cried in pain. At that time Keterina did not know what caused her child to cry, so the pain had to be endured until the age of three. “The first time I found out was when I was bathing Leska, there was a small lump the size of a marble on his genitals. Poor thing, when he was crying he was holding back the pain,” said Keterina while stroking her son’s head.

The mother of six said that when she found out about her son’s abnormality, she was afraid of the worst. She and her husband Isak planned to have him examined at a private hospital in Langgur, Kei Kecil Island. The journey from Soindat to Langgur takes two hours by sea using a long boat or what the Kei people call a ‘speed’.

At noon, the family set off from Soindat to Langgur. In the middle of the journey, strong winds and big waves hit their boat. The boat became unsteady, sea water tried to enter the boat. Keterina’s body became a shield to protect little Leska from the cold sea water. Wet clothes were not a problem, as long as Leska could recover from his illness.

After an hour’s journey, the family arrived in Raat, Kei Kecil Island. With limited hospital hours, Leska decided to spend the night at his brother’s house in Raat. The next day, the trip to the hospital continued for an hour by public transportation. Upon arrival at the hospital Leska immediately received an initial examination. The doctor diagnosed Leska with Hernia and required surgery.

When they got the news to perform the operation, the parents were faced with one problem: the cost was not small. After some discussion, the family decided not to operate on Leska. Isak works as a tuber farmer and fisherman, earning just enough to feed his family everyday. The long journey they took did not succeed in curing Leska and they returned home disappointed. Leska had to endure the pain of her hernia for years.

The long-awaited day finally arrived, on Monday (17/6) Keterina and other villagers departed from Soindat to Langgiarfer using two speeds. After almost two hours of waiting, Leska Rahantali’s name was finally called for an initial examination by doctorSHARE volunteers. The lump, which was only the size of a marble, has now grown bigger like a baseball.

The next day, Leska, wearing his favorite soccer shirt, entered the operating room. Leska, who was cheerful yesterday, turned gloomy and did not want to be separated from his mother’s lap. Occasionally he whined in fear. With his mother’s persuasion and Leska’s strong desire to recover, he was finally ready for surgery.

After about an hour of surgery, Leska was moved to the recovery room. The tense feeling turned into emotion, Keterina repeatedly wiped her tears because she saw her son’s operation was successful.

The surgeon who handled Leska, Dr. Isaac Lahunduitan, SpB, SpBA, explained that Leska’s hernia was caused by the uncovering of several holes in the ducts where the testicles descend or the Processus Vaginalis. Hernias in adults are usually caused by work and disease while children are due to congenital abnormalities. The only method of Hernia treatment is through surgery.