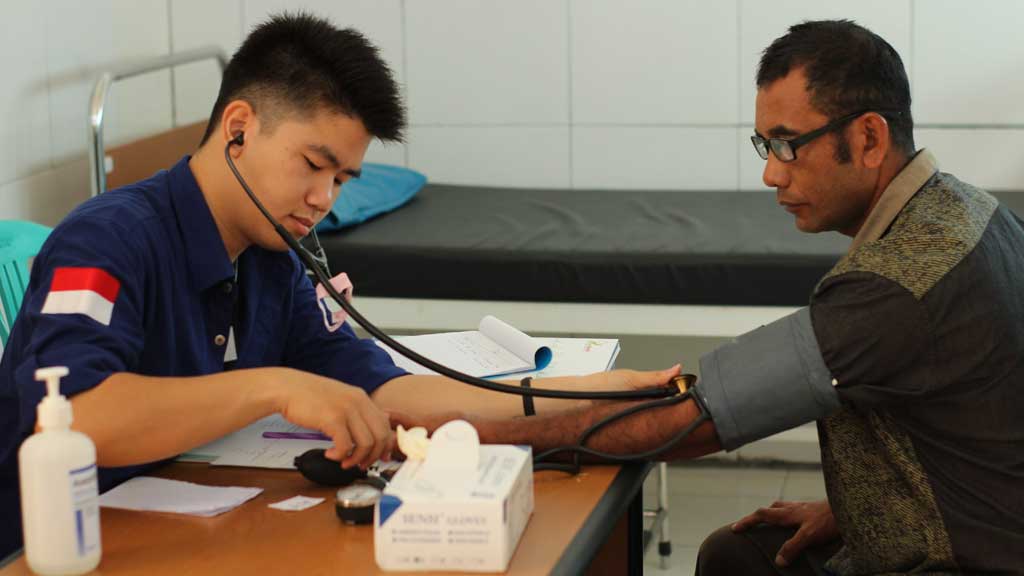 According to the Field Coordinator of Medical Services, Stanley Saputra, Obi Island was chosen as the location of doctorSHARE’s medical services because Obi Island is a remote island located very far from Labuha, the capital of South Halmahera Regency.

“In Obi there is only a community health center and general hospital that has limited facilities for surgery, so patients must be referred far away to the hospital in Labuha,” said Stanley.
After a long journey, the volunteer team consisting of 19 medical volunteers and 3 non-medical volunteers provided services at Obi General Hospital (RSU) on the next day (10/9). The team opened a general medical center, gynecological examination, and screening for major and minor surgery patients.

The general treatment and gynecological examination lasted for three days. According to the Coordinator of the Medical Center, Dr. Adinda Widyanti Dewi, there were a total of 381 patients with the most complaints of hypertension as many as 66 patients. Meanwhile, Midwife Fadila Nur’aini said that pregnancy and gynecological examinations (obgyn) served 44 patients.
Major and minor surgical services were carried out at the RSA Dr. Lie Dharmawan, which was docked at Laiwui Harbor. Until the end of the service day (13/9) there were 16 minor surgery patients with the most cases including Lipoma and Atheroma. The major surgery team successfully operated 13 patients with various cases such as Hernia, Cleft Lip (Labioschisis), Contracture, Gynecomastia, Lipoma, and Incomplete Abortion.

The arrival of doctorSHARE in Obi Island received a positive response from the community, one of them was Tepianus Saude who came all the way from Sum Village, East Obi District. Tepianus was willing to take a four-hour sea journey by long boat or what the community calls ‘sea ojek’. The father of four had suffered from a lump on his neck for nine years and needed major surgery.
“I am very happy that there is free surgery. So I don’t have to spend a lot of money on surgery. I’m grateful doctorSHARE came here,” said Tepianus.

Midwife Fadila Nur’aini said these three topics are very important for cadres and midwives at the health center. This is in accordance with the Obi community, which has a high number of maternal and infant mortality cases.

“They are the spearhead of the community, it is hoped that they are trained to handle cases of HPP, Preeclampsia, and Asphyxia. So that they can reduce maternal and infant mortality rates. In addition, the cadres will become breastfeeding consultants in the puskesmas area under their guidance,” Fadila said.

Director of Obi General Hospital (RSU), Dr. Diadon Mitaart, Sp.B, FICS said that the arrival of the doctorSHARE team in Obi is not just to help those who are sick or provide knowledge to health workers in Obi, but more than that. The arrival of doctorSHARE teaches the people of Obi how to be social beings who care selflessly and regardless of background.

“From doctorSHARE activities, the people of Obi seem to realize again where we must serve each other with love. doctorSHARE continue to spread love, let love always be endemic wherever you stop,” concluded Dr. Diadon.