Healing is not just about medicine 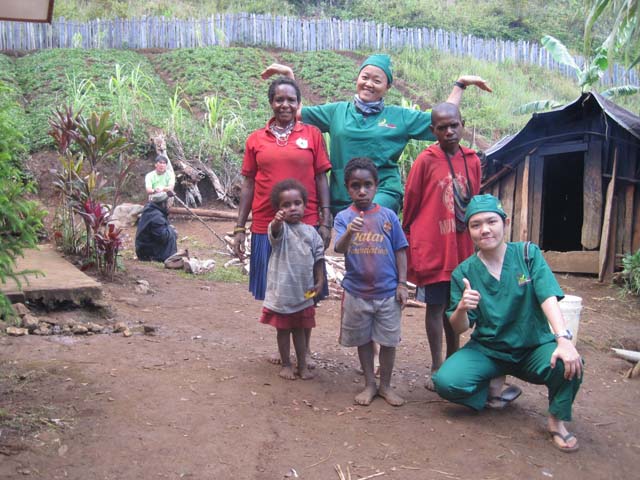 The greetings were repeatedly exchanged when we passed people. Sometimes it was a handshake or a “pull the finger” greeting when we met some of them. That’s how it is: another field is another grasshopper, another hole is another fish. Greetings alternate, depending on where the feet are going.

This was my first time setting foot in the mountains of Papua. Previously, I had only visited the coastal areas. This time, I had the opportunity to join doctorSHARE’s Flying Doctors medical service in Ugimba, a district in Intan Jaya Regency.

Unlike the coastal areas where many Papuans are fluent in Indonesian, in this region there are still many people who cannot speak Indonesian. We could not ask them directly about their complaints or medical history, so the presence of translators was vital.

Our destination was the last village on the trekking route to Carstensz Peak, one of the seven highest peaks in the world. It’s no wonder that the air temperature is quite cold. Jackets, sleeping bags, beanie hats, gloves and socks became my faithful sleeping companions.

The cold temperature also added to the challenge of conquering the journey from Sugapa District to Ugimba District. We traveled for approximately 13 hours when leaving and 12 hours when returning. Everything was done on foot because there were no other modes of transportation that could be used.

Muddy roads, steep climbs, slippery descents, and even crossing rivers we did to reach Ugimba. Perhaps the soundtrack of the cartoon movie Ninja Hattori could adequately describe our journey this time -…climbing mountains, passing through valleys, rivers flowing beautifully into the ocean… –

Luckily we were still assisted by porters to carry our gear. Otherwise, we might not have been able to complete the journey to Ugimba. The terrain was tough and mentally testing. The feeling of wanting to stop and give up often came to mind. But I remembered that the purpose of this trip was to reach a district where no doctor had ever visited.

Ugimba District does have a health center, but the health workers and medicine are not necessarily available. Maybe what we did wasn’t a big deal. Maybe we could only treat a few hundred people, but I learned that our presence there was very important.

At least we opened up hope by showing that there are still people willing to meet those who are hard to reach. We shared what we could, what we could do. Sometimes recovery is not just about the medicine they take, but about the genuine care and attention they receive.

All fatigue is forgotten when we see the faces of children who are happy with our vitamins. Tiredness disappears when you see people smiling after being examined and given medicine.

I am always happy to have the opportunity to join medical services, especially in remote places. By sharing what I have, I learn and learn some more. I think life is funny sometimes. I feel more happiness when I live in hardship and serve people in the countryside than when I sit quietly in my office and make money from my profession.

I’m still figuring out where I want to be and trying to prioritize to design my future. But for me today, this quote from a book by Romo Mangun resonates: “being more, not having more “*.

In the end, I can interpret life from what I learn and experience, to what extent I am in the process of becoming a better person, a better doctor, not merely pursuing material, titles or positions. We can judge ourselves not by what we have, but what we have done for others.