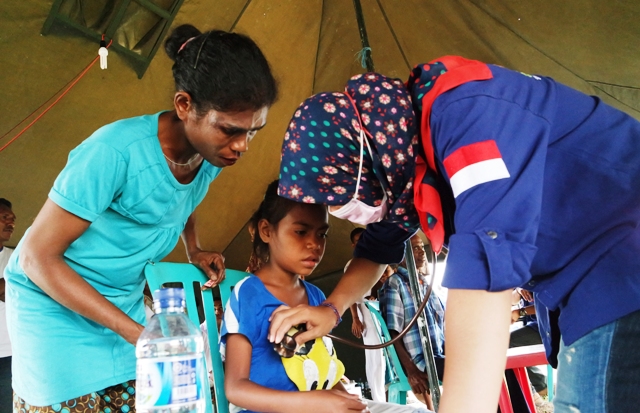 Although it was delayed a day due to travel obstacles, the welcome of local residents did not diminish considering that no doctor was registered as a medical staff at the only Community Health Center (Puskesmas) in North Aru. There are only 11 medical personnel consisting of midwives and nurses. Upon arrival, the team immediately coordinated with stakeholders such as the Head of North Aru District and the Head of the Aru Islands Regency Health Office.

“According to the data we obtained, there were around 100 patients, including general medicine, minor surgery, and major surgery,” said the Head of the Aru Islands Regency Health Office, Y.E.O. Uniplaita, Wednesday (27/4).

Without wasting much time, the doctorSHARE team immediately held general treatment and screening to capture prospective surgery patients. The number far exceeded the team’s target of 350 patients. General treatment patients that day reached 968 people with a total of 1075 cases. From morning to night, the team served patients non-stop. Based on the data, the most common case was Acute Respiratory Infection (ARI) with a total of 418 patients.

According to John W. Utukaman, the Head of North Aru Subdistrict, local residents are still often hampered by laziness. As an archipelago, access to medical services is only by sea using speedboats or the like. Knowing the small number of patients recorded by the Health Office, he and several other people took action to “pick up the ball”. As a result, the number of patients increased.

“The strategy must be persuasive and personalized, for example by picking them up using a speedboat or similar boat, then they will want to go. If not, they will just follow their laziness,” he told the doctorSHARE team (27/4).

Although it rained several times, until the last day the number of surgical patients who had been treated by the doctorSHARE team was also more than the screening records. For three days, the minor surgery team with coordinator Dr. Rocky Tumbelaka treated 44 patients. Almost 60 percent were circumcisions while other cases included lipomas and atheroma cysts.

“The third and last day of surgery in Marlasi only scheduled one patient. But we are still open for additional patients. It turned out that the number reached 14 people,” said Dr. Rocky (1/5).

The increase in the number of patients during the series of operations did not occur in major surgery. Out of 15 prospective patients, Dr. Vinisia Giovanni as the coordinator of major surgery reported that only 11 cases were handled. The reason was that some prospective patients did not come without reason or canceled because they could not get permission from family members. The majority of the major surgery patient cases were lateral inguinal hernias, aka dropped backs. Other cases include manus contracture and tubectomy.

Aru Islands Medical Services Field Coordinator, Dr. Ivan Christmas, expressed his gratitude for the attention of the entire community and the good cooperation of the team, local officials, and all parties involved. According to him, limited facilities are not a reason to give up. One of them was when evacuating patients after surgery.

During the medical service, 10 local residents turned into “ambulances” since there were no motorized vehicles operating on land. No kidding, the human-powered “ambulance” had to carry postoperative patients for about two kilometers on foot from Marlasi Pier to the Basic Essential Neonatal Obstetrics Service (PONED).

One of the patients from Kaibolafin Village, Salim Wamona, said that this kind of activity really helped the community obtain proper health services. “Plus, everything is free of charge. Hopefully the doctors can come here again,” he said (4/29). The nearest hospital is in Dobo, which takes two to three hours by speedboat, while there is not a single doctor at the Marlasi Community Health Center.