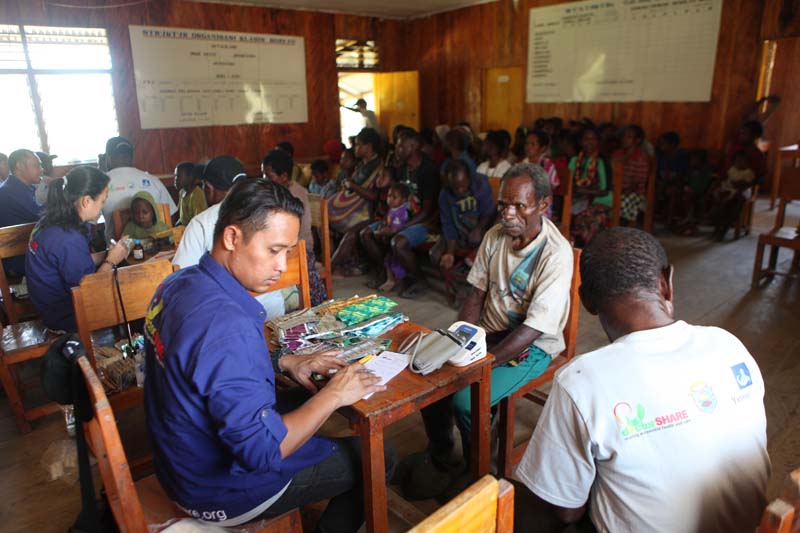 The Flying Doctor team deployed 4 medical volunteers and 2 non-medical volunteers and collaborated with the Somatua Foundation and the Regional Government represented by the Chairman of the Intan Jaya DPRD, Marten Tipagau, S.Sos. The three elements collaborate with village leaders such as tribal chiefs, village heads, local mantri, and religious leaders.

“We have difficulties with health issues,” said Lukas.

Not surprisingly, the residents of Intan Jaya Regency were very enthusiastic about attending the medical service. A number of residents from neighboring villages were willing to walk to Jae Village to get medical services. It took hours for residents to reach the location.

The Flying Doctors medical service which took place from 20 to 23 May 2016 served minor surgery (22 patients with 30 cases), general medicine (448 patients), counseling on Clean and Healthy Living Behavior (PHBS), and toothbrush training for 200 participants. In addition to distributing deworming drugs, the team also donated clothes and sandals.

“Even though they are not supervised in the long run, giving children an understanding of healthy living is very important,” said doctorSHARE’s Flying Doctors Coordinator, dr. Riny Sari Bachtiar, MARS.

According to Marten Tipagau, the Flying Doctors service is very helpful for the people of Wandai District. As a local resident, Marten felt firsthand the difficulty of walking long distances when he was sick and wanted to seek medical treatment.

If it is physically impossible to walk, other villagers will help carry them to the health center. “Flying Doctors is a form of humanizing humanity through the courage of doctors,” he concluded.

The people of the central mountains of Papua clearly still lack attention, especially regarding health issues. Residents of Wandai District only have one local orderly, Petrus Zagani (40). This father of five children has to walk 3 hours every day from his residence to the health center. Residents who need emergency help can only surrender if Petrus has not arrived or is still serving other patients.

“Mamas” (mothers) who are about to give birth often end up having to do the delivery process themselves in their respective honai.