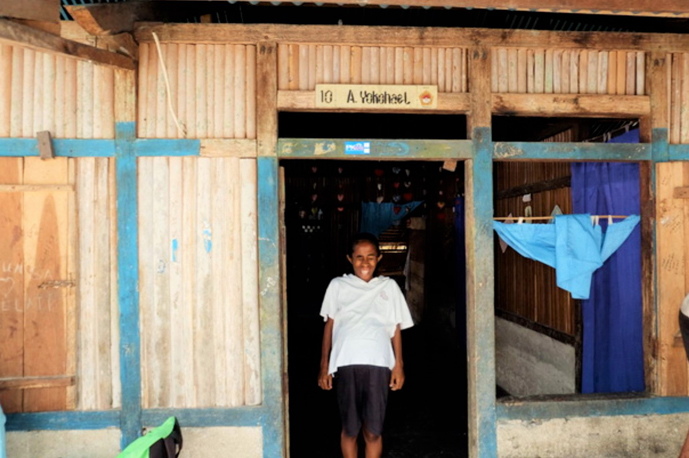 Eltina Yokohael, a 25 year old woman from Ohoinangan, a small village which is located in a sub-district of Kei Besar, South-East Maluku had a cyst inside her abdomen.

The abnormality had actually been noticed when she was a girl of 14 years. However, due to her financial condition and the missing health facilities, she had to bear her suffering for years.

Eltina’s family is, in fact, poor. Her mother plants and sells vegetables. She has been doing this since Eltina’s father lost his sight. This happened long before Eltina’s was ‘sentenced’ to having a cyst disease.

It all began when Eltina felt something painful in her abdomen. Gradually, it was getting bigger day by day until she was unable to do her usual daily activities. The pain from which she suffered forced her to stop going to school and she had to keep lying on her bed all day long. Since then Eltina had never left the house. Often, she was in such pain that she had to scream.

“When her abdomen was getting bigger and bigger, Eltina couldn’t do anything, but accept to just keep lying on her bed – for eleven years”, said Eltina’s cousin Susanna smiling bitterly while remembering those hard days.

Nevertheless, the family put all their efforts into finding a cure for Eltina. She had been examined several times, however, it was determined that she had to get surgery. The Tual Hospital in Kei Besar gave her references to other recommended hospitals, which had the qualifications and the capability for operating such an abdominal cyst surgery.

In this case, Eltina had to be taken to Ambon. But again, financial difficulties kept her from going to Ambon and receive the treatment. Her hope for recovery was again just in vain and the cyst was still inside her abdomen.

By planting and then selling some vegetables for a living, Eltina’s mother was only able to earn a very small income which was just enough to support the family’s daily needs. But inside their wooden hut, two family members were in need for special care: Eltina and her blind father. Eltina’s mother did everything she could for her two beloved ones.

According to Susanna, Eltina’s mother had nine children, of which Eltina was the youngest. Three of them passed away. The remaining five siblings did not live in Maluku anymore. They worked and lived in Papua or moved to some other regions following their husbands. Therefore, they returned to Ohoinangan rarely.

“I registered Eltina for the Floating Hospital, because Eltina’s mother did not really understand how to do a registration. When I was told that Eltina had to be taken to Jakarta, I was so worried about the expenses. However, the doctors convinced me that every expense would be beared”, said Susanna.

All expenses were covered by donations. Susanna and Eltina were finally convinced to travel to Jakarta and they wished to their neighbors in Ohoinangan village farewell. Eltina got the surgery on March 3rd, 2016.

“I thank God that Eltina’s cyst has finally been removed. Without doctorSHARE visiting Maluku, Eltina would have never been cured”, said Susanna who already has four children herself. One of them died in 1995 during the Maluku conflict.

Eltina’s surgery in the Husada Hospital in Jakarta was performed by the founder of doctorSHARE Dr. Lie Dharmawan. The operation went smoothly and required approximately two hours. Dr. Lie said that the cyst was a dangerous one. With the family’s permission, the team also cut off Eltina’s appendix.

“According to the diagnosis, it was a cyst on the right ovary. The cyst had already grown to an extreme size because of a lack of treatment due to too little medical facilities and services. Furthermore, latter is due to the economic conditions in such rural areas”, Dr. Lie explained.