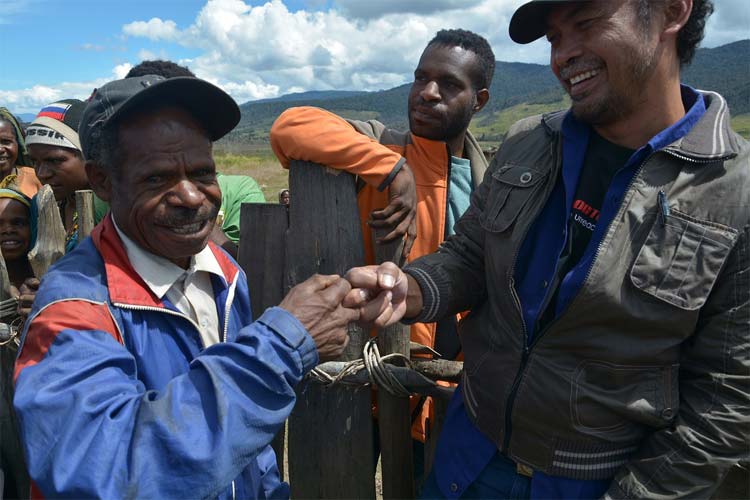 When our PAC 750XL aircraft landed on the runway of West Wano District, Lanny Jaya Regency, Papua, after traveling approximately 35 minutes from Wamena City, I was completely satisfied with the scenery around us.

The hills towered with white at their peaks, the green grass wafting a fresh scent. Rows of wooden fences complete the rustic feel. I stare intently, unable to believe that last year this district had experienced the ‘white dew’ disaster.

As I stepped onto the tarmac, the locals gathered around to welcome me. The doctorSHARE Flying Doctor Coordinator, Dr. Riny Sari Bachtiar, MARS, introduces all team members who are then translated into the local language by Mr. Arnus Yigibalom, a representative from the Lanny Jaya District Health Office.

Forget cellular networks and electricity. But that’s what made us more solemn in observing the medical service area and mingling with the community.

Despite his physical limitations, Mr. Elmus carries an extraordinary responsibility.

Mr. Elmus is a person with a disability. Both of his legs have congenital talipes equinovarus (CTEV). The outer leg is pulled inwards, so that the sole of his foot is facing upwards. His ankles are bent. Mr. Elmus walks on the outside of his foot, which is likely to cause pain.

“The abnormality is present from birth. CTEV must be corrected from birth,” said Dr. Agus Harianto, Sp.B, a doctorSHARE Flying Doctor volunteer.
Elmus never complained. He has to walk every day from his honai to the auxiliary health center (Pustu) in West Wano. Not a short trip. Even for those of us who are not physically challenged, the two-hour journey down the hills and paths is tiring. After arriving at the pustu, Elmus serves the patients.

It all started with his training with Mr. Naskoya (now retired) as a health cadre in 1984. The father of six children has faithfully served for 32 years. Apart from being a health cadre at the West Wano Pustu, Elmus also serves the community in other districts. Elmus also has to take care of his garden like other people.

The role of Mr. Elmus and his friends in the Flying Doctors activity which took place five days and four nights in the West Wano District was very helpful to the team.

They helped the team translate Indonesian into the local language for the patients. Their ability to memorize the types of drugs is also very helpful for the smooth running of general medical activities.

“Mr. Elmus usually carries the medicine from Pustu to Pustu. He knows the names of the medicines by heart,” said the Head of the Puskesmas, Mr. Fredy Kogoya.
When the team conducted basic life support and first aid training guided by Flying Doctor volunteer, Junaedi, S.Kep. Mr. Elmus and his friends took it seriously and enthusiastically.

The six cadres expressed their gratitude to Mr. Junaedi. The most memorable thing was when the six cadres embraced each other and cried after the training was over. They felt lucky to have received the training. Their spirits were boosted by Mr. Junaedi’s motivational words.

Stepping foot in the mountains of Papua is truly a luxury I have.

It was not an Airbus, Pillatus Porter or PAC 750XL that took me twice to this region. It was doctorSHARE’s Flying Doctors team that was my vehicle. Without being a doctorSHARE media volunteer, I might not have had this luxurious opportunity.

The luxury I am referring to is being able to satisfy my curiosity while helping to implement medical services in eastern Indonesia which is still very limited in terms of access to transportation, health and education, as well as getting to know inspirational figures like Mr. Elmus. It is to them that I reflect and am determined to give my best to others.