Rizky, Laode, and the Story of Pediatric Hernia 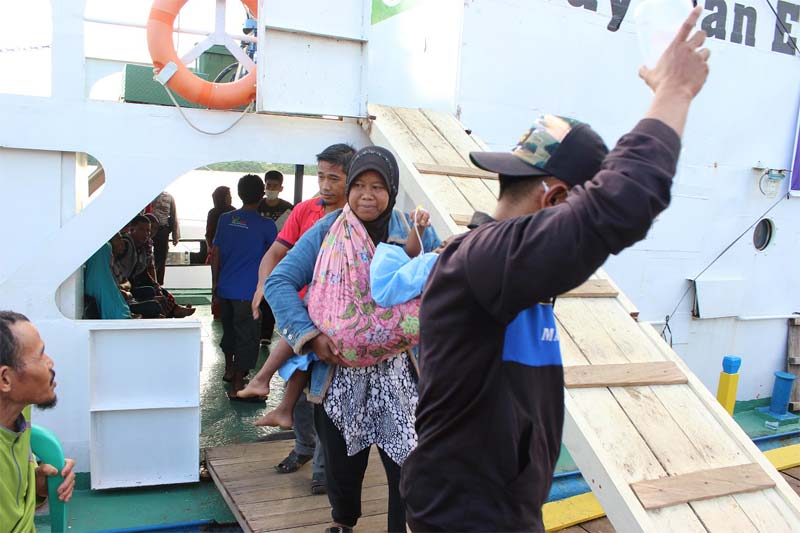 Crying could be heard from the patient’s postoperative room. The sound came from a boy who had just completed hernia surgery at RSA Nusa Waluya I, which was docked in Muara Sabak Timur, East Tanjung Jabung Regency, Jambi. The boy’s name was Rizky.

Next to him, his fellow playmate was preparing to enter the operating room. He suffered from the same disease as Rizky, a hernia. Both boys are 5 years old. Hernias can not only occur in adults with heavy work. Hernias can also affect children and even babies.

Rizky and Laode come from the same village, Lambur 1. They are playmates and both attend Early Childhood Education (PAUD) in the area.

It was not their togetherness that caused them to develop hernias. Hernias are not contagious, but heredity could be the cause.

Laode’s parents had taken him for a check-up at the nearest health center and he was diagnosed with a hernia last July. However, Laode was not immediately operated on because his parents were still worried about the many rumors circulating about hernia surgery.

Unlike his friend, the son of Aminudin (47) has a family history of hernia. He only had his son examined before the surgery was organized by doctorSHARE. However, he has known about this hernia problem for several months.

A number of hernia patients in East Muara Sabak, East Tanjung Jabung Regency, Jambi are children under 17 years old. This case was not only found by doctorSHARE in Jambi. While providing medical services in Sintang, West Kalimantan, the team also found many children with hernias.

Considering their young age and thinking about the future, sometimes parents are worried about bringing their children for surgery. In addition to issues of cost, access and health facilities, another problem is the fear of reproductive function abnormalities in children.

“The reproductive part in men has a channel that is close to the hernia sac but not fused. A good surgery will not cause disruption to the channel. So the possibility of abnormalities or disorders in this case usually does not exist,” explained Dr. Yulius Wimbo, SpB.

With good treatment, hernia surgery can even be performed on infants. According to Dr. Yulius Wimbo, SpB, several studies have revealed that surgery in infants can be performed as early as two weeks after a hernia is identified.

Other rules regarding major surgery reveal the standards for surgery on infants. The rule is that the baby must be at least ten weeks old, weighing more than 10 kg.

Hernias need to be treated as soon as possible. If not, the hernia can cause certain organs, such as the intestines, to become pinched. This condition is dangerous. If no immediate action is taken, the intestines may die or become dysfunctional.

Moreover, when feces accumulate, the dead intestine can rupture. This condition can cause complications that can lead to death.

In the eyes of the public, a hernia is known as a dropsy. It is a condition where the muscles cannot support the organs of the body. There are various types of hernias based on their location.

In traditional societies, hernias are usually treated by massaging the lowered part of the intestine and putting it back in place. This method is considered unsafe by doctors.

“During kneading, the intestine that comes out can be twisted and become deprived of blood. The intestine will die. The sequencing itself is only temporary and the hernia may re-occur,” explained Dr. Yulius Wimbo SpB.

Although surgery is more expensive than sequencing, the safety and quality of healing is better. In addition, the possibility of hernia reappearance is greater when only sequenced.

After surgery, the patient must undergo a recovery period. The postoperative wound recovery period can be completed within two weeks. Afterward, patients are also strongly advised to only do light activities for one month.