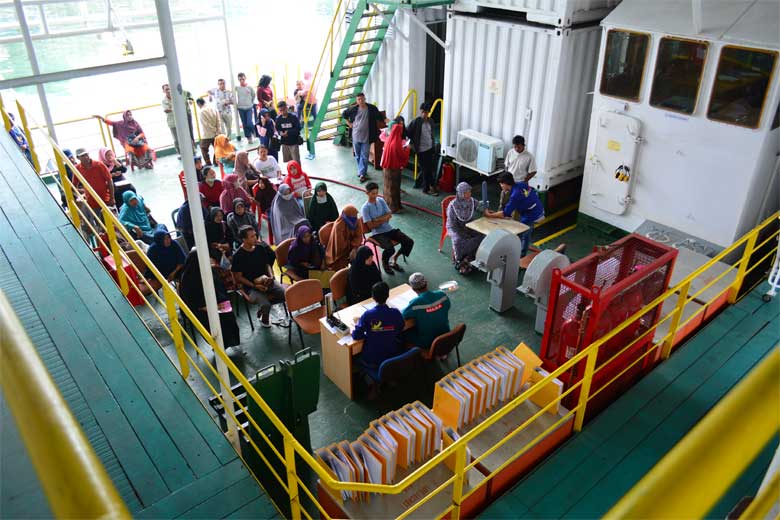 In order to conduct more medical service missions, doctorSHARE is planning to add another boat to its floating hospital fleet which will be given the name RSA Nusa Waluya II. RSA is the abbreviation for “Rumah Sakit Apung”, which means “Floating Hospital” in the English language. The secretary general of doctorSHARE, Dr. Marselina Mieke, stated that the RSA Nusa Waluya II currently is still in the stage of fundraising. It is necessary to gather at least IDR 16.6 billion which is about 1.2 million US$ to build doctorSHARE’s third floating hospital.

“Until now, approximately IDR 4 billion (almost 300,000 US$) could be collected. The sum was donated in various ways like e.g. room adoption or fund donations. Also a certain sum also came from the kitabisa.com-campaign”, Dr. Marselina Mieke explained during a press-conference in the context of the celebration of doctorSHARE’s 7th Anniversary at the Jetski Café, Jl.Pantai Mutiara Block R, number 57, North-Jakarta on Saturday, the 19th of November 2016.

The RSA Nusa Waluya II will be designed as a barge-boat carrying containers which will be stacked to form a three level structure. This Floating Hospital will be constructed as similar as possible to a regular hospital.

The on-board facilities will be more appropriate and better equipped than those of the previous Floating Hospitals. This will include an emergency room and its installations, a surgical suite, a radiology Room, a polyclinic room, a patient ward, and a multi-purpose hall which will be used for e.g. healthcare trainings.

“As planned, the RSA Nusa Waluya II will be operating in the West South-East Moluccas Regency. Last year we conducted extensive research on the area between the Fordeta and the Larat Archipelago”, Dr. Mieke stated.

Additionally, the RSA Nusa Waluya II will be used to provide health-care trainings for qualified personnel in the remote locations of the area for six months. This health-care personnel is expected to be able to provide much better health-care services to the people in their regions after the training.

“We want to design much more sustainable programs. We observe significant maternal and child mortality rates here in our country, so we are going to provide trainings for midwives. USG trainings will enable them to detect any abnormalities at a much earlier stage. This will ensure that they will be able to handle any further complications during parturition by themselves”, Dr. Mieke explained.

In approval with Dr. Mieke’s statement, Dr. Debby Kurniawati Adi Saputra, who is the coordinator of the programs of the RSA Nusa Waluya II, also explained that the programs will be more focused and directed towards the empowerment of the local healthcare personnel. Besides providing medical services, this objective is an important aspect of doctorSHARE’s vision.

“We hope that these programs will run smoothly in order to support the government and the local public health service sector in improving the medical services for the people. Furthermore, the implementation of the RSA Nusa Waluya II is expected to become an example for the provision of medical services in remote archipelago areas”, Dr. Debby explained.

Other ways to raise donations than through fashion is e.g. the fundraising through the means of art. This will be done for example by conducting a charity-auction. In addition, proposals are also submitted to government-offices and private companies to receive funding from those sources.

“We hope that at the time we will launch this third boat, we will be able to confidently say that this is the outcome of the efforts of all the people of Indonesia”, Julia said firmly as she also represents her father, Tjandra Onawah, who is the benefactor to donate the barge which is currently rebuilt as the RSA Nusa Waluya II.